Boston Marathon registration is closed and the exclusivity of marathons

I think we all got spooked. Last year's record closing of the Boston Marathon registration caught a lot of people off guard. The marathon messaged to all past racers that this year, Oct. 18 would be a day to be watched. Most Boston qualifiers had it on their calendars. Some of them (like me) knew to treat today's 9 a.m. entry enough of a task to give it attention. Cause if you waited an entire work day, you would have had tough luck.

Funny then that after work, I arrive home, check my mail, and got this in my mail box. 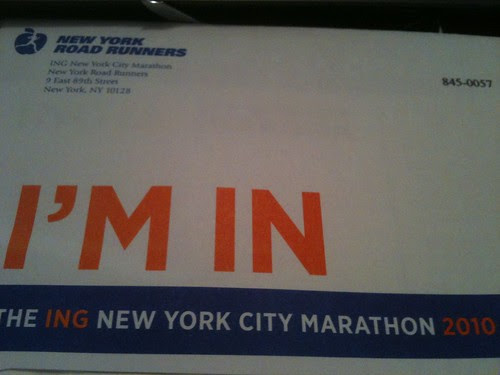 The mega marathon is the party everyone wants to get into. They're widely popular, everyone wants to run them, and the organizers are now beating back runners. Marine Corps Marathon, Chicago, London and all the other big ones have differing standards on how they try to create some sort of level playing field. All of them these days fill up quickly.

NYC, for example, has really tough qualifying standards, a lottery (that I entered twice before getting in) and a few guaranteed entry options. On one hand, it feels so exclusive but the nature of the lottery system - three strikes and you're in -- that I don't feel bad that I'll probably only run it a few times.

Back to Boston. What to do about the most prestigious of marathons, where the supposed allure is the fact that you have to qualify for it.

Make it harder: BAA should consider looking at all times through all age groups and genders and level set. I may hate this (ie my 3:15:59 may become once again a 3:10:59 or faster) but if the bar has fallen low, then so be it.

Let qualifiers use one marathon once: I, and I'm sure quite a few others, am using my 2009 time for 2011. It's a pretty awesome rule that you can use a fall qualifier for the next two Bostons because of that 18-month window. A lot of us, then, don't feel the pressure to qualify once a year. It's a privilege to run and race Boston. I think we could support that even though I hate the idea of training every year to BQ.

Consider a qualifier lottery system: Lets say you qualified in 2010. You didn't get to register for Boston. You miss out again the next fall. Why not let a qualifier get a ticket in a lottery. Maybe a few unused tickets equals a guaranteed entry. Not really a deferment but a, hey, I qualified a few years but didn't get to even register.

A limit on straight Bostons: I know there are those who pride themselves on runnnig X consecutive Bostons. Maybe it's a small minority but why not allow people to take a breather. Would that open the field? Food for thought.

One thing I remember hearing at last year's race that the majority of the runners were newbies. So maybe it's a fact of life that since marathoning is becoming more mainstream, and more of us are running and getting faster, that we're in an era where Boston will inevitably fill up quickly. Maybe one day, getting in the front of the line at Boston won't be that different than an Ironman signup.

It's funny, that no matter how more popular a mega marathon is to run, to experience a great marathon, all you need is a great course, awesome weather, a corps of dedicated volunteers working on the back of a solid race organization. I've loved marathons, like yesterday's, where the cozy field of a few thousand meant you could pick out friends on the course. Easy for us to share that sentiment, but when that big party's going on, we all want in.

Update: BAA's Executive Director Guy Morse gives a little Q&A about the quick sellout. And yes, he mentions looking at solutions like tightening standards and reexamining the size of the field.

This is definitely making me (us - hubs and I) nervous. At the moment, I feel like it's a long shot for us to qualify within the next couple of years. That being said, if they make it harder to get in, we will work harder and continue to chase it as long as we have to.

I really think they should consider allowing runners to run Boston only once per qualification...

BUT I'm glad you got in for 2011 and hope you have another wonderful experience!

I wonder why they don't leave the qualifiers the same, but just allow for a higher number of entrants?

I realize it would be too late to do that at this point since the race is already planned, but if this is a trend that's going to continue, they'll need to do something if they want to maximize.

Count me in as being nervous about them messing with the qualifying times (although admittedly that's probably what I'd do if I were in their shoes). I'm looking at a 3:10 standard right now, which I believe is attainable with enough work. If they jack it up to 3:05 or 3:00, there's not much point in even trying as I don't think that's within the realm of realistic possibilities.

In retrospect I'm kicking myself for not focusing on a BQ this year and getting in before this mess. Probably should have seen it coming after last year, but have been distracted by the Tri stuff.

Either way, I'm keeping my fingers crossed that they come up with another solution. Worst case scenario my long term focus moves from Boston to Kona, but ideally I'd like to keep both on my radar...

It is such a 'weird' situtation where you want the best of the best but if they change the times, it becomes really elitist.
And if they opened it up to more people, can they really support a bigger number?
We have friends looking to BQ in Hamilton on Nov7th but now know they have a long wait to even register and even longer to actually run.

It is making me nervous as well. Next year I would be looking at a 3:15 in order to qualify for 2012. I think that would be possible for me given that I ran a 3:22 earlier this month. I will be keeping an eye on the situation and plan my training for 2011 marathons accordingly.

I'm never going to run it, and I'm ok with it but it does turn a lot of people off from running, which makes me sad. Yes, there are elite athletes in the sport, but the races themselves don't always have to be about the best of the best (although I so enjoy being pushed out of the way by walkers in a corral, let me tell you).

I get that we have to respect the distance, I do, but with the number of tour groups you can book into these things and ways you can buy in through charities instead, how can I respect it and sit back and say, "oh well! I'm not fast enough! I'm not elite!" when I can just swipe my card and toe the line?

Congrats for getting in! I have ways to go to even attempt to BQ so I am not too worried. My goal is to keep my current time and just the age group catch upto it, this might take a while.

As a veteran charity runner, I am truly offended by your post. It is the minority that "swipe a card" with the rest of us tirelessly running charity events while also running the same number of miles for those who are ABLE to run qualifying times. We, speaking for charity runners, are not taking advantage of a loophole, but rather, are
Giving our time and hard work to those who need us. This is not "buying our way in" but working twice as hard (likely an under-estimate) for the greater good, and measly medal.

Thank you very much for your wonderful

Indeed, the qualifying standards may not be hard enough - personnally, I wouldn't mind if they tightened the qualifying times (3h45 for women of my age is indeed too easy). But to me the big problem is NOT the qualifying standards but the fact that the BAA gives away thousands of entries to charities each year and this, they don't mention it - but honestly, who is able to collect $3,500? That is the minimum to be allowed an entry and charities still have some. That is really a shame, especially since this marathon is the only one you must qualify for to be able participate and that is not fair for qualified runners like me and thousand others who missed the registration. Besides, this never happened, not even for NY marathon (registration closing withinh 8 hours). I find the field size is not big enough.

@ Erin Daly : I am sorry, but though running for a charity is very worthy, I don't agree when you say you "work twice as hard". Instead, I truly believe that people like you, running for charities, prevent qualified runners (who really deserve it) like me to get an entry. And contrary to what you said, it is NOT a minority - there are dozens of charities and each offers many entries. That is NOT FAIR to me. ;-(