Runners go through highs and lows, sorta like those hilly courses we encounter. Sometimes we tackle the incline with purpose, upping the pace like we were racing, whereas at others, we slow to a crawl, every step up a painful muscle memory that is only erased when we hit the downhill portion. Downhills in the running sense are usually perfect if you take them the way you're supposed to: coasting, letting gravity do its work, leaning into the grade.

Peaks and valleys is the natural cycle to a run, but also to a runner's seasons and ultimately the runner's livelong obsession with training. Yes, a lifelong runner is training not just for a race, but for longevity.

I've peaked many times in my seven plus years of distance running. Chasing PRs was definitely the easiest pinnacles to scale, breaking a time barier like a sub-20 minute 5K. Tackling distance took another discipline entirely. It was instead of learning to push yourself to a maximum speed, you pushed yourself to a maximum pace you could sustain while imagine yourself running forever (or at least until you gratefully hit your pre-planned mileage).

The first few times I went 'long', that is going at least 13 miles, I felt I had reached some sort of peak. Looking back, many years later, the distances I piled on top of those miles dwarfed the first 13.

But the pause always comes, a step-back always beckons, a time for recovery is a runner's necessity.

I mention this because even as I tackle long distance again at the start of this winter training season, I feel like the summit is far away. From the low point, hitting 15 mile Sundays on my way to 20+ miles six weeks down the road, where I am now seems very hard, and climbing up will be just as daunting.

The great thing about peaking is not just the feeling of getting to that level, but then applying all that added fitness for your perfect run, be it a race or a perfect spring Sunday morning when you've clocked another 20 miler when the rest of your fellow citizens are getting outside for the first time after a long hibernation. You've hit the ground running.

In fact, I can picture myself, in the early days in April, cooling off at this park after that long run. 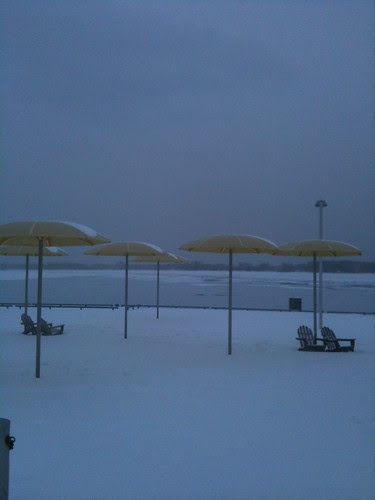 This post was prompted by my running buddy Marlene, who posted about hitting her peak so early in the season. I posted my reply here.
Posted by yumke at 7:53 PM