I may actually tolerate the 5K now.

Actually, I still hate them, this type of speed is just not my thing -- or at least I don't think it is, yet. I've never had a chance to run the annual Pride and Remembrance 5K (results here), which is amazing because I've done just about every major race in town. Part of it is that I just am not a fan of 5Ks, especially in the summer.

But since running the Moon in June earlier this month, where nothing was really working that well, ending the race slowing instead of speeding up, I felt that maybe I needed to try again.

A bunch of my teammates were running and by the time it was race morning, I realized that I knew a good portion of the front runners -- nice to see everyone from the different running clubs representing. A few days ago, I volunteered at the Hipster Run hosted by Black Toe, so I combined a yellow headband and calf sleeves that Brooks gave us with my yellow singlet. Felt perfect for Pride.

Mike and I chatted and we figured we'd go for somewhere around 3:50 to 3:55 average pace. I felt that maybe a 3:46-3:47 was possible to take a shot at sub 19, but after fading earlier this month, I just wanted to run smart, comfortable and see if I could kick it up at the end.

1K
We seeded ourselves in the sub 20 minute corral, and as the confetti filled start jumped started us, I felt myself holding back, knowing that sometimes we all accelerate to way faster than goal pace.


Running with my training mates Julia and Mike, I'm usually warned that we start our intervals too fast, so I just tried to find that feeling. A lot of runners were going out fast, but I just maintained it, heading out toward Queen's Park circle. We turned and as the kilometre mark clicked, I saw we were about on pace, I read it out to Mike who was right alongside me. Mike P. was also there, and the three of us would run the race within sight of each other.
3:51

2K
The field was already a little spread out, and we were curving around Queen's Park. I just maintained what I thought was a relaxed pace. Looking back at the race, I think I should have been more aggressive, but I was remembering how it felt to go out too fast last time. At the 1.5K mark, there is a turnaround where you basically lose all momentum. Still, I went out to hammer it out. Was a slight hill after that as we ran to the west of the legislature building. This would be my slowest kilometre, and I knew as the lap hit my effort would have to increase
3:58


3K
The next 500 metres was a little bit of a curve and back north, where I would see some of my teammates cheering. It was also the point where we would converge with the slower runners, creating somewhat of a traffic jam. I was there early enough I think to get some room. The top end of this was a sharp turnaround. I wasn't hurting. Something told me that I could just go.
3:54

4K
By this point, I had to swing wide of the course because of the runners we were lapping. Doing this added a bit of length to the course, but that was fine. I found myself with no one to really pace with so I started to hammer it. For the next kilometre, down the west side of the park and past the water station where I was able to grab a sip then dump the rest down my back, I was upping the pace. It was warm but not hot. I was working hard but I wasn't tired. I was finding a good groove and my shoes -- love those 1400s! -- were doing their job. Hit the pace with the final turn in sight and then I realized I could race.
3:47

5K
I continued to hammer, running another few hundred metres before we hit the final straightaway. Unlike the last race where I faded, I felt I could keep it up. There were a few runners ahead of my that I could target. Someone at the sideline said "final 800" which put into context the distance. I thought of my intervals and channelled the hurt. It wasn't that bad -- push, push, push. Heard my name a few more times, and near all out toward the finish. Saw that the clock was in the low 19:00s and gunned it.
3:42 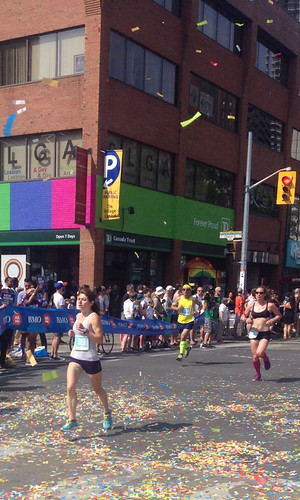 Super pleased. I'm three weeks into the cycle. I didn't taper at all. I have more fitness to gain. I'm finally learning HOW to run (more on that later). This is going to be a fun summer.

excellent job, Kenny! Congrats on kicking that 6 year record to the curb!

We are always looking for Sponsors! Corporate Sponsors, Small Business Sponsors, and Individual Sponsors. Please help us if you can by becoming a sponsor for the Team Spirit Breast & Ovarian Cancer 5K & 10K. Join the 15th Annual Team Spirit Long Beach 5k and 10K marathon and help put an end to breast and ovarian cancer today! This is an opportunity to promote your business while supporting a worthwhile cause. All sponsors at the Hero ($2,500) level and above will receive recognition in Long Beach Memorial's Mercury Magazine, recognition in the Long Beach Grunion Gazette, recognition as a Team Spirit Sponsor on the Team Spirit Website, and your name posted at the start/finish on the day of the walk. Team Spirit Long Beach organizers can be flexible in the way your company chooses to be recognized. We are open to your suggestions and welcome your input on meaningful ways to impact the value you receive from sponsorship.

I was looking for results and I found your blog post on 2014 Pride Run! That day I was at work and couldn't make it. But I promised myself to make it every year after that. Now it has been two years i am running this beautiful race. Your blog very refreshing and so detailed. I always enjoy reading your writing. very smooth. Thank you :)