Just finished synching my Garmin with my computer tonight and I've hit the 2000 mile mark (3200K) for the year with one month to go. It helped that I put in 25 miles in two days this past weekend in very decent weather. At this rate, I'll probably hit around 2100 to 2140, depending on how the holiday weeks go.

I'm trying not to think of this as the post-marathon season any more. In two weeks, the good old fun begins as I start to ramp up for Boston training. The schedule is looking merciful right now, considering I'm targetting a less aggressive 55 mile weekly peak (as opposed to the 70 mile peak this past summer's training.) Which means for the first five weeks of thon training will feel like the past month: decent mileage, but not overbearing amount. I'll be adding some pace and LT work and a few longer runs, not topping more than 13 miles over December.

Blogging is going to be pretty sparse over the next while -- won't be running any less, just when you hit the 974 post in four years (yes I started this blog in December 2005!) I still have material, but I can only write so much about these dark and cold late fall nights. Wait till the first snow, I'm sure it'll get me wanting to post something.
Posted by yumke at 10:37 PM No comments: Links to this post

I don't mind as much getting in the miles during the maintenance period, the weeks and months between training. I do mind the fact that I don't get to see the sun very often. I spent Saturday with some friends and by the time I got home, only around 5 p.m., it was already getting dark. Some runners like me love to soak in the sun, so putting on my head lamp and blinker on late fall and winter nights leave me a little less motivated.

Today was a different story. Cool, blue skies and just warm enough for the semi brave to put on shorts and a T-shirt. I ran back and forth on the waterfront trail, tackling the hills of High Park and then into the city in the sun and cool shade before stopping at a Starbucks for an Americano. Everyone's out there with their heavy jackets, jeans and shades. I feel kind of like a rebel in my running gear walking a kilometre back to home, cradling my coffee and soaking in the sun. Kinda nice, actually a perfect way to take in a Sunday afternoon. Beats sitting on a couch watching football (no offense, sports fans).

So just glancing at my calendar:

-Holy crap my marathon training begins in three weeks. This post marathon honeymoon is quickly coming to a close. Luckily, I could probably use a dose of discipline in skedding in my training. This is Boston training, after all.
-My ramping up and maintenance mileage is building quite nicely. No major aches. My last four week of mileage has gone from 23 miles, 33 miles, 39 miles and 39 miles again just this past week. Did a 13 miler today and one last Sunday. I'm in DC next weekend and I think I'll try to push it to 15 miles. Time to go long once again.
-I'm at 1959 miles for the year, just 41 miles away from cracking 2000 again. If things go according to plan, i'll do the 2000th mile somewhere in the National Mall next Sunday. Or in Toronto around Dec 1 or so.
Posted by yumke at 1:59 PM 1 comment: Links to this post Posted by yumke at 8:36 PM 7 comments: Links to this post 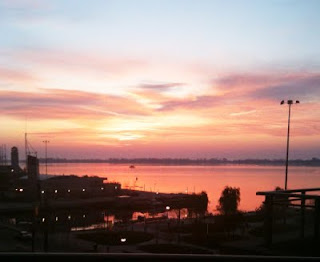 I've finally broken the habit of doing only evening running. I think
I've seen a lot of sunsets in the past year but i don't think it
compares with a sunrise. Something about watching the colours
brighten, as you're waking up.

I'm getting back into the habit of running without a schedule it was
hard post marathon season to structure my workouts. Now I'm trying to
feel out what a daily run shoud be. 5 miles, 6? To keep my base, I'm
targetting 35 to 40 miles a week. Sounds like a lot but I think it'll
keep me honest so I don't slip before mid December when it all starts
up again. 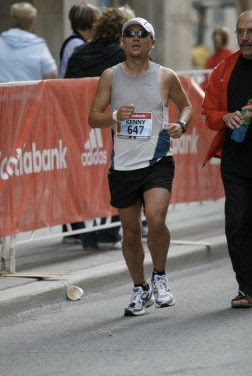 Just like I had my bad races, and later experienced a little bit of redemption, I know they'll get theirs. The best part is I know we'll all be lacing up our shoes for the next run, the next training cycle, to log the next thousand miles before you once again toe the start line, with the hope that at the end, you can get that finish-line moment.

Posted by yumke at 9:37 PM 6 comments: Links to this post

I've been having a lot of fun on the trails this past week. On my first post-marathon run, I lowered the hammer and did a run a little faster than I should have. Today, I was running along a path with posts and I found myself weaving to the left and right of them. Fun running is back, and I'm savouring it.

I think i have a few more weeks in which I'll be able to wear shorts and a T-shirt (with arm warmers). Then it'll be winter mode and time to think about the next marathon cycle, which starts in six weeks.

All I do know is that it never makes sense to take a total break from exercising, especially for types like me who love schedules. The Pfitzinger program has a 5-week post-marathon recovery schedule that I've plugged in. I've gone a little extra this week (having just done a 9 miler) but I intend to ease back into it.

I've decided that for Boston, i'm going to do a less intense 55 mile a week program from Pfitzinger. I'm not going to kid myself that I'll be able to do any more during the winter. The dark mornings/nights don't help either. For my other spring marathons, I've been able to get away with even a 12 week program assuming i still do the weekly mileage of between 30 and 35 miles in the weeks leading up.

On an interesting note, the BAA sent out an email to past registrants to warm them to apply as soon as they can. Looks like for the 2010 edition, they're selling out quickly. I know a few days ago, they had hit more than 12,800 confirmed. They closed registration in late January but there's talk that it could close earlier.

From the BAA site:


Registration is underway. If you have met the qualifying standards and intend to enter the race, the B.A.A. urges you to register now and not wait as registration is on pace to reach its maximum field size earlier than ever before. The 2010 edition will mark John Hancock Financial's 25th year as principal sponsor of the world's oldest and most prestigious annual marathon.


For the rest of the year, I have a few goals

-Hit 2000 miles. I'm at 1,847 so I should have no problem hitting that target
-Stay and eat healthy right past December. Part of scheduling in my running is to make sure I keep fit. Also, the temptation to eat like I am in marathon training is there, so trying to behave.