At the Boston Marathon, the sweetest finish soured

It's been called the sweetest left turn in the world, the corner of Hereford that leads to the final stretch of the Boston Marathon on Boylston Street.

For runners, Boston is the everyday Everest, a sort of Olympics for those who toil the roads on 16-week training programs in those winter months. And to be in Boston during marathon weekend (I've run two in recent years) is to know how much runners and everyday citizens celebrate an event that reaffirms live.

So when I heard about the bombs at Boston it was a shock to the system. I know more than several runners down there and I've run literally been in their shoes, struggling down that final straightaway. The finish of the Boston Marathon is the happiest place for a runner, where dreams are fulfilled.

Today, friends of mine emailed me, texted or called me, fearful that maybe I was there for the 2013 edition. I in turn was fearful for friends of mine who were down there -- more than 2,000 Canadians were signed up for the race. Most so far have checked in and for that I'm grateful.

A few years ago, in the lead up to the Marine Corps Marathon in Washington, D.C., officials raised security for the October race, citing recent shootings.

Running can heal communities. Despite the backlash runners faced last year over the cancelled New York City Marathon, these big city events can lift spirits. The New York Marathon was run in the months after Sept, 11, 2001, as was the Marine Corps a month after 9/11.

I spoke to two running friends in Boston and emailed another. One, Samantha Sykes, a friend who I see on road races around Ontario, said that the bombs feel like an attack on the running community. A community that is helpful, friendly. Dave Emilio, another runner who I'll see on random Sundays in a Toronto park, told me he didn't know if he'd do another Boston. Big city marathons, like Boston, Chicago, New York, may never feel the same again -- not for awhile yet. And it's too early to come to conclusions about what this means for races, for the sport of running. That will come with time.

Last week, while accompanying a running buddy, we both described Boston as a runners' Christmas. And it's true, for the most part. Today, that finish line, one that I had gratefully had the pleasure of running twice in my career, was marred.

One thing all of us runners know. In times of stress, we lace them up, and we go out for a run. We'll be back on our feet and on the roads.

This has been crossposted at The Huffington Post Canada. 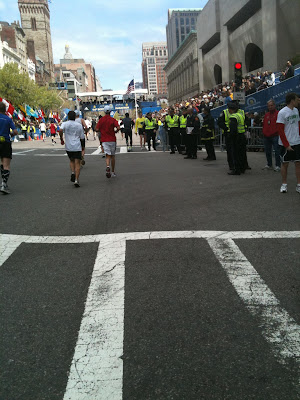 Thanks for this post. I was in Boston yesterday and was fortunate to cross the line before the explosions.

My heart goes not only to all the folks caught up in the blast but also the entire running community.

Sometimes things do not make sense no matter how hard we try to understand it. This is one of those times.

Let's hope they catch the perpetrators and bring them to justice.