Some of you by now have read the jaw-dropping interview that Jay Glassman gave Canadian Running after the finish-line fiasco at the Sporting Life 10K.

His response -- particularly after Sporting Life the sponsor and Camp Oochigeas made comments on my previous post, promising that they'd look to improve the race -- seemed like a slap in the face. He essentially blames runners for the fiasco.

Read the full Canadian Running piece for context, but here's what he said in a nutshell.

I figure pictures do it all justice, so let me present to you, race advice on etiquette from Jay Glassman

LESSON 1: After the race, 'run it out'
“We had people in the chute trying to keep people moving, but we also had a lot inexperienced runners stopping. They don’t know they’re supposed to run it out.” 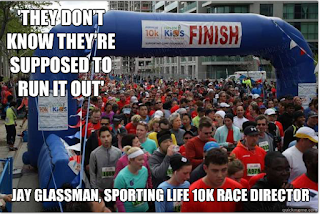 LESSON 2: Don't stop after races, even if you bump into a crowd  (That's Jay there, bottom left)
“Some of the runners became quite rude to both myself and my marshals in the chute when we asked them to continue moving through. It wasn’t that they were being stopped or held somewhere because of us, it was because they were stopping themselves.” 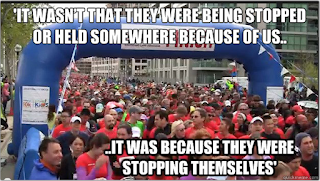 LESSON 3: Keep moving, even when you're forced to wait for traffic
“We’re bringing a ton of new runners to the sport. They don’t know that there is an etiquette involved in an event like this. At the end of any race it’s important to keep moving.” 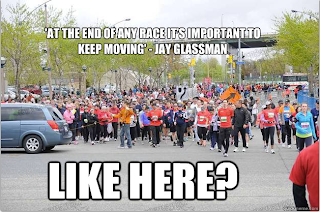 This whole situation is frustrating. I've run Sporting Life 3 times now and it's been one of my favourite races. I've run Goodlife half marathon twice and was planning to make Goodlife 2014 my first marathon. I didn't have any major issues either this past Sunday or the week before, but I don't want to support a race that isn't taking the complaints of their runners seriously.

The City of Toronto needs to respond to this because quite frankly it's embarrassing to runners here, and more importantly to runners who visit the city and won't come back

Actually there is an unexplored issue here as to how much these races BENEFIT the city in terms of tourism. We know the grousing about the traffic, but if there also are real benefits to the non-runners (such as hotels and restaurants as well as shops visited when runners are in town), that is an element that is good for the city and arguably to a greater degree than traffic disruption is bad. And perhaps the city can then invest in opening the TTC up early, etc. That would be spectacular, but as a running community we probably can`t expect this is to be done all that often and not three weeks out of four.

I have to agree with Jay. People didn't know that the finish line doesn't mean stop. There were people taking selfies in front of me with their cell phones! Having said that, it's the enthusiasm and energy of the new runners that makes this race fun. They probably need two purple corals.