We run because it reminds us what it is to live. And for the community it brings. The picture below is of the burial of Jim Kelley, a runner who died after being hit by a car while running. The mourners wore running clothes to his funeral, and followed him to the burial site.

Jim Kelley was killed while out doing what he loved doing, running. Here's a picture from his funeral. pic.twitter.com/pyzp6N8XqG

It was Jim’s last group run. It was exactly the way he would have wanted it, everybody enjoying the camaraderie. He would have thought it was the coolest thing on the planet. Read the rest here. 
“People sometimes sneer at those who run every day, claiming they'll go to any length to live longer. But don't think that's the reason most people run. Most runners run not because they want to live longer, but because they want to live life to the fullest. If you're going to while away the years, it's far better to live them with clear goals and fully alive then in a fog, and I believe running helps you to do that. Exerting yourself to the fullest within your individual limits: that's the essence of running, and a metaphor for life — and for me, for writing as whole. I believe many runners would agree”

A lot more than you think happens during a run.

I watched a remarkable film the other day. Two filmmakers interviewed people while they were running. It's an amazing depiction of how running strips down so much, you're left with your true self. Any runner would identify with the thoughts of the interviewees, many topics or things we think about when we run. They talk of love, loss, the search for meaning and reflection.


The Runners - Trailer from Banyak Films on Vimeo.

Do yourself a favour, watch the full film.

But The Runners really got me at around the 7:27 mark.

The film makers caught up to a man running with headphones, and asks him: "Who's your favourite person in the world?"

He runs, pauses, strides, looks down. Between huffs and puffs, 8 seconds later, he responds.

"That would be my Dad"

"It's because of him I'm here talking to you. He just had a stroke, just before the New Year and suffers from dementia. So I'm running the marathon this year for dementia." 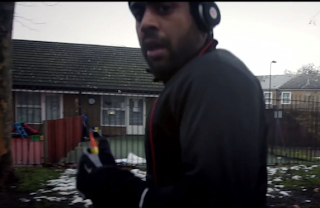 "I love him.. he's the most important thing in my life man, and he's not well I wish you could understand. At the moment, he doesn't remember fuck all, and it breaks my heart."

Crossposted at HuffPost Canada.
Posted by yumke at 2:06 PM

I run circles around the neighbourhood to end up where I started, but when I arrive, I am different than when I left.