About a year ago, I put on my blues and yellows, and did something I don't often do: I went out for a Tuesday run with a bunch of strangers. We did a few laps around Queen's Park. I saw others who looked familiar on my waterfront paths, only we were standing still, marking a moment of silence in the brilliant later afternoon sun. I then saw a friend who had just flown back from Boston. We traded a big hug. 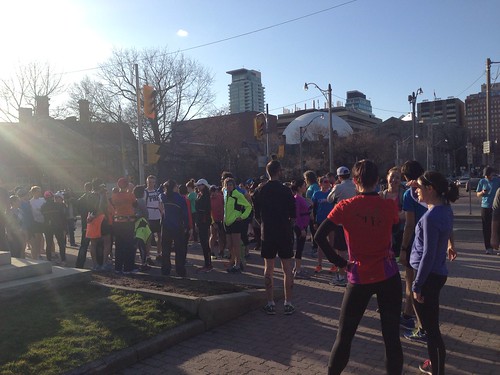 About three weeks later, a friend of mine came back from the States and -- on the usual intersection where we met for an after-work run -- he slipped a blue and yellow wristband into my hand. "A souvenir," he said. I'm not much for wristbands, but this one said "RUN NOW" and "BOSTON 4.15.13."

I haven't gone on a run without it ever since.

I've worked my entire career in the media. We love anniversaries. It's a news hook, easy to fill space and poignant enough usually to preplan in an environment that can always change. A year ago, before the bombs hit Boston, it was a usual Monday morning for my colleagues, but it was Patriot's Day for me. I was tracking a bunch of friends, tuning my computer-side TV to the sports channel to listen to the sounds of Hopkinton, that starting point for the 26.2 mile race.

Hours later, feeling sick, I went home and off to bed. I was woken up by a phone call from the office. Bombs had gone off, and my staff was covering the story. Shaking off the grogginess, I checked my email and found messages, from friends who had finished okay and were accounted for, and friends who thought I was at the race. Within an hour, I was interviewing Toronto runners, writing a news story, writing a blog post in shell shock about our Boston.


Boston means so much to many of us for different reasons. I spent years striving, fighting, running, for a chance to run my dream race. When I qualified, I looked back at all my achievements - personal and professional - and put that run among the greatest things I've ever done. Months later, toeing the line at the corral, I was in utter awe. I did not belong here. Everyone was so much better than I was. This was on national TV. How did I make it here? 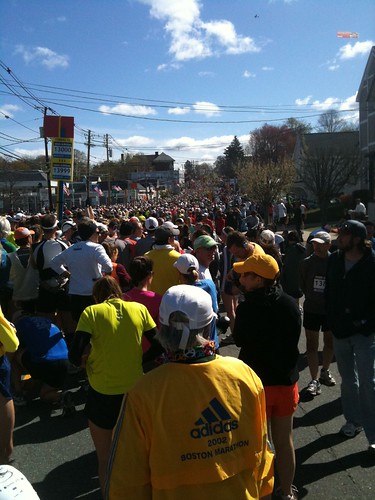 The second time I ran Boston, I stood at the back of Wave 1 and savoured the crowd. I shivered, not from that tail wind, but from the chills of knowing I was somewhere special. It was one of those lifetime moments. I didn't take it for granted, but tried to take slow motion snapshots in my mind's eye. If I never ran Boston again, I didn't want to remember nerves or looking at my watch. So I stood and soaked everything in.

Around the world, and in every other state, it's a Monday. In Boston, that day, Patriot's Day, is Marathon Monday, and it's my Christmas Day. In the past week, I've been talking to friends who are going. I'm proud they are going to run the race hard, and they would have it no other way. Next Monday, I will be tuning in from Toronto, watching the race, tracking friends and reliving that route from Hopkinton to Boylston.

In the last year, I've been on my own journey. When two men tried to take my Boston memories away from me, I responded one way I knew I could, by vowing to get back. And to get back, there was only one thing to do -- do it harder, faster and with the purpose and love I've always had for the sport. So day after day, through the past 12 months, I've put on my shoes, walked out the front door, and pointed my wrist at the sky. The watch has had plenty of company this year with my blue and yellow band a reminder.

Boston runners, we're proud you'll be there for us this year. May wind be at your back, the cannolis keep you full, the high fives just as hard as the thunderous cheers on that beautiful day that is My Most Favourite Day. 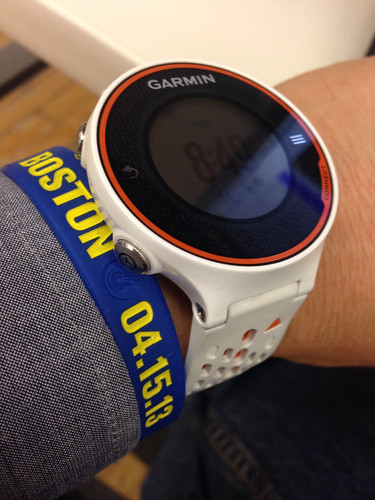