Mid stride, you just don't care about all of those things.

On a normal day, many "things" start to grate. Some things pile on, weight to my shoulders, tasks to complete, more challenges to tackle. Work, life obligations, they come at me and I have little choice but to sidestep, or to take it head on.

Today felt like many of those days. Too much in my thoughts, too many things left undone, the to-do is so long that I have to scroll down for pages to catch all of the things.

After work, I'll often pick a city route. There, unlike the uninterrupted waterfront trails where I can run for miles and minutes and to the horizon, I'm constantly interrupted. I'm stopped at a stoplight, my hands on my hip, breathing hard, waiting to hit the start button again. I'm swerving pedestrians, people who have similar to-do lists and weights on their shoulders. I'm running into the road, giving way to oncoming cyclists and in-a-hurry cars that are trying to beat the city traffic. I'm running along side, and toward, other runners, sharing a wave, a nod.


The monster hill that I hit today tested the notion that it was supposed to be a recovery day. I wanted to run slow, the legs were to be saved for another workout. I hit the hill, and with every bend, I felt the weight being lifted. When my breath and effort and stride and arm swing took precedence over all else -- the impending deadline and decisions and to-do lists waiting to be ticked off -- my mind melted. What was most important in the coming minutes was my physical effort. What was to be tested was my fitness, my feet, my legs and my heart. I finished the first climb and decided to do it again. And again. By the final ascent, I had jumbled everything and put it all back into perspective.

The rain fell, first lightly, never threatening to be a downpour, like a week ago today. On this summer's eve, with the longest day just a few sunsets past, I embraced the rain, putting out my arms midstride as if that was a better way to turn the limbs into water catchers. Running down a major street, with the glass buildings allowing me to see my arm swing, the stride rate, the form that needs improving but the mood that was already bouyed, I felt... I felt alive.

Mid stride, both legs in the air, I felt strong, free, relaxed, happy, powerful, with much to overcome.

Mid stride, I remembered why there's always a next run in my plans.

Mid stride, I didn't have to think about the next step, as it was the most natural thing to follow. 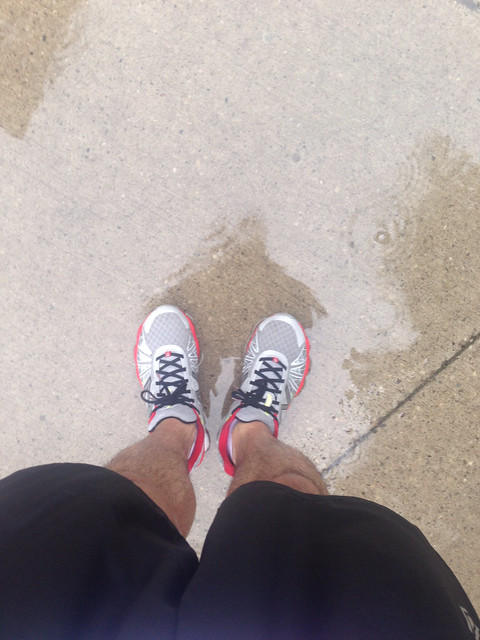