The knee told me to give up long before the lungs said I wasn't ready. As it turns out, I wasn't ready that run, that season, that year. Or for the next two years.

It was the winter of 2010, and I had just finished a three-year push that left me exhilarated but exhausted. I had run thousands of kilometres, embraced harder workouts and after six marathons run in 2008 and 2009, I had put together a Boston qualifying race. I had achieved a huge goal. I was going to run my first Boston in 2010. When I put down a fast marathon in 2009, I even wrote a post about musing about getting faster.

Here's what I wrote:

I told Lee that somehow I feel like I'm entering a new chapter in my running life. He admitted that when he qualified for Boston years ago, he became a more serious runner. I don't think i'm going to get any more serious, but I'll look at it differently. I want a victory lap of a year in 2010. I want to chase faster times. I want to be a pace bunny one day. And I want to turn my BQ into a confirmed registration so I can finish booking a hotel and flight for a trip to Beantown next April

"Chase faster times." I read that now and would love to tell 2009 Kenny that he had something else in store, but on what winter 2010 day a few months later, when I pulled the plug after 2K into a 6.4K tempo run. I started to think of running differently. In the coming three years, I would run for running's sake. Sure, I ran long, and I ran races, but everything was different. If I were to describe my approach to training, I call it my jazz years. All improvisation. Plenty of long winded sections but always ending with a flourish of a race.


Working on a post on running for as long as you possibly can, because it is who you are, and you really can't remember life before it arrived. Now that I'm a decade into distance running, I am only now forming thoughts about what it's like to be a lifelong runner. I've been tracking mileage since 2005, when I started really racing and running. Numbers mean a lot to runners - we track kilometres, times, pbs. When I look back at the last 10 years I see ambition, dedication and years when running became just running, and I was fine with it. The last two years have sparked a reemergence of performance running. I'm now running the best I have from a speed and efficiency perspective, but I'm also way more spiritually and emotionally grounded. It's an amazing feeling. Hope everyone gets to experience the long road ahead. #runto #running
A photo posted by Kenny (@yumkerun) on Jan 8, 2015 at 8:03pm PST

In the 10 years I've been running distance, I've covered 30,000 kilometres, run 105 races, participated in 29 marathons. When you look closely at the numbers in the picture above, you see a rampup of mileage and races and PBs, but also look at  2010 to 2012.

What was I doing those three years? Was I taking a sabbatical, a break from running? The answer to that helps me think about what it means to be a long term runner. 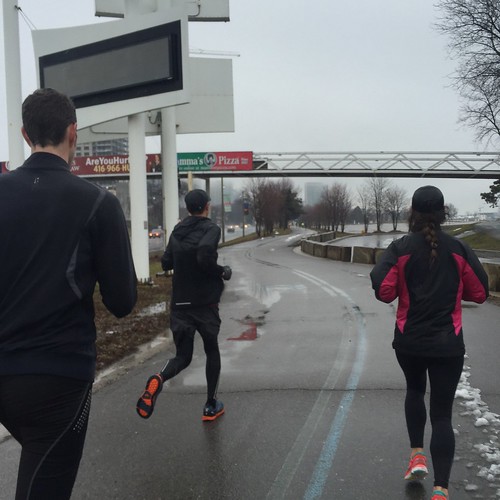 WHEN I DEFINE MYSELF -- in a social media posting or any other site where I'd put my bio -- a runner is inevitably part of my identity. Most people start with their jobs, then go from there.

I once had a conversation with one of my coaches, a gifted athlete and a fast runner. What I told her helps me realize how I continue to reconcile what running is to me. "I'm an exceptional journalist," I told her, with no hint of self deprecation, "and I consider myself to be a good runner." Running, I explained to her, was something I could excel at -- I would never be the best, but it was one sport that if I pushed hard enough, trained smart enough, that I was blessed with the body and the stride and the fitness that helps me succeed -- if getting a Boston qualifier or a sub 20 minute 5K is a measure of success, I have already hit my bucket lists.

Run to get away

Run because I can

Run because it is great to feel fast.

Run to see how fast you can go

Run for the challenge of distance, or take a distance and run it faster than you've ever run it

Run so you can suck in the air, feel your heart beat rise

Run to breathe. Run to see. Run to feel. Run to put away the dress shoes and strap on a light pair of soles that will take you so far to places you've never seen.

I decided in early 2013 to run away all of my feelings and the terrible personal 2012. The bombs in Boston reverberated with me, shaking up a runner who was already going through a personal shock. In the training and the speed and the seeking for quality and improvement, I found that all of the things I leaned on running for could shape me into the runner I wanted to become. I wanted to improve my lot, my life, and making running one way to measure that made sense. In a lot of ways, I leaned on running. What I describe as my comeback was both as a runner and as a person.

Now when I look at performance, some six years after I first sought to qualify for Boston, I am much more grounded as I seek new paths. I'm thinking about all of the lessons I've learned from racing so many years. I'm smarter about how I train. I think about the other work I need to do that makes me better -- eating well, being stronger, running recovery. I always stop to admire the scenery.

And the 10-year on runner in me is so much in love with the motion. If I ever have to recall what it feels like to be a kid, I only have to step out my front door and start striding out my courtyard, or skip a curb while on a 25K run, or just take a look at breath taking views I see every day. If I want to feel alive, I look to my daily runs as motivation.

Nothing, in this runner, is taken for granted. It can be taken away at any time, and I'm going to savour every moment.

Maybe you have seen the Catching Kayla video, about a young competitive runner with MS, one of the most inspiring running videos I've ever seen. What resonated with me at the end was what she says about how she views running, knowing she could lose the ability to run sometime in her adult life.

"I just hope to run as long as I can and to make the most out of it as long as I can," she says. "When or if I'm not able to run at some point down the road, at least I can look back that when I could I gave it my all."

As for me, 10 years in, I've realized that speed and PBs and time is really never a bar I want to measure my running life when I look back at all of the distance and experiences. There is no good or bad version of myself as a runner. Running, like the left foot following the right, is a constant. I'm always in motion. I'm always running. And I always want to run long -- and for a long time.
Posted by yumke at 5:00 PM

fantastic accomplishments over the past 10 or so years, kenny - and more importantly, an admirable perspective on it all!

keep on enjoying the journey ...