8K: This is the fourth time I've done this race and it's one of my favourites. Just about every year I've done it, a bunch of my friends have run on the first day. In fact, this was the race that got me bitten with the racing bug

Strategy: I had three major things on my mind while running this race. The first was that I had a 20 mile run the next day. The second was that I had a 5K race about 30 minutes after racing this. The third was, well, that I'm not quite up to race shape.

I saw my friend Sasha from my old work place -- they do a team every year. We lined up and I knew he was going to go out very fast. I told him I'd let him go ahead of me. I wanted to run this as a tempo run and so with the hils, that'd put me in the 4:15 to 4:25 range.

Here are the splits and the race info from Garmin

1K: A flat part where we're jockeying for position, actually kinda flat to down hill, although I do remember a slight uphill. I was just trying not to go out too fast but to seed myself properly. The split was 4:13

2K: This features at the end of it a huge downhill, the same big hill we have to climb at the end. Going into this part of the race, I knew I wasn't giving it all. Around this time, I was telling myself to hold back and tried to pace off a few runners. Plunging into the downhill, I could have increased the pace, but I decided to let my breathing dictate my pace. It felt comfortable.
The split in 4:15

3K to 4K: Going into this, I told my friend Sasha that I'd take it easy in the first 5, then 'race' the last three. Yeah right. The 2K to 3K was pretty flat, then starts a pretty long incline that kinda hurt. I believe the incline goes for at least 500 metres. 3K split was 4:20 and the next was 4:40

5K: The next kilometre was a slight downhill and I was feeling ok. The wind was at our back so I was feeling pretty good. Split in 4:16 and I hit the 5K mark in the early 22 minute range

6K. This had a Big downhill that you ahd to throw yourself down. Tried to be careful, didn't want to hurt the muscles too much. It was followed by rolling hills. Split in 4:13.

7K: We turned north and yup, the 52km/h wind was right in our face. Not good. Winding hills but I felt I wanted to pick it up. Did the split in 4:34

8K: Ah, the infamous Spring Road hill. It defeats so many people. It comes within the last 400 metres and lasts 300 metres of a steep climb. I powered into it and took the hill strong. I saw a friend cheering and I felt pretty good. Did the hill without breaks and stepped it up at the end. The split in about 4:34 with a few seconds tacked on at the end.

Finished the race in 35:12 which, surprisingly, is my second best time on that course out of the four times I've run it. I think holding back actually helped me a little.

The 5K (course and splits here)

So, what made me run two races on one day. Well, last year, a bunch of my friends -- all photo editors from our old campus paper -- ran the 5K. Over lunch last year, Jelly, Tom, Fitzy and I decided that if so many of us were running it, maybe we should just do a team the next year. So we recruited seven of us -- including Frankie -- and named ourselves Running Copy.

Here's a pic of, from left, Fitzy, Tom, me and Jelly, from last year. 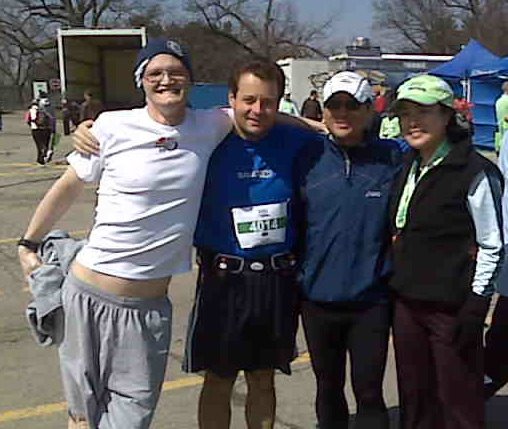 After finishing the 8K, I jogged to the gathering area and met up with the gang. Thirty minutes later, we were lining up. Four of us guys were aiming for 22:30 to 25 while the girls lined up farther back.

1K: Horn went off, and we took it easy. I found myself running with Frankie and we chatted a bit. Fitzy went storming by and we let him go. After the water stop after the first kilometre, lost Frankie but Tom was running beside me. Did the split in a (for me) steady marathonish pace of 4:45.

2K: Tom and I were running together and we were chatting. Well, I was doing a lot of chatting, feeling that if I coudl talk, then at least we wouldn't have to go out too fast. It was nice and leisurely but I felt we were giving it a little. Split in 4:29

3K: Fitzy was ahead of us by 10 metres as we hit the downhill and we plunged ourselves down. I was a bit ahead of Tom but at the bottom of the hill I let up a little so we'd run side by side. By the end of the kilometre, we'd come beside Fitzy and passed, stepping up the pace a little on the rolling hills. Split in 4:26

4K: Into the wind we went, and we paced a little stronger passing more runners. We saw a few kids ahead of us and as we hit a little hill I think Tom and I both resolved to catch up to them. Split in 4:33

5K: The last kilometre is the same as the 8K, the big hill at the end. We both noted that the nightmare of a hill was coming and we bared down. As we hit the bottom, we both stepped it up. I don't know why, maybe because my friend Lee was at the bottom (thanks Lee!) cheering us on, but I felt so very strong. I blasted up that hill, emptying my tank. It was a painful run up but I felt good, letting my heart go way up.

You don't get very many slow motion moments in your running life, but this was one of them. I remember it so clearly, the spectators cheering on strongly, me passing tonnes of runners, and myself turning the final corner with even more gas. Did the last kilometre at 4:23 pace! and the last bit at 4:15 pace. Final kilometre split in 4:23. Wow.

Finished it strong. Felt great and I'd done the double. That was a load of pain and fun, shared in the company of great friends and savoured at the pub afterward.

I don't think I was 100% in race shape either, but man did having a cold affect my breathing. The 60km gusts didn't help, either.

I ran 2 minutes slower than I did that course last summer, but I still consider it a good run.

I think I also learned a lesson about hills in this race -- in the flat parts of the course I was passing, in the hills I was trailing.

Pretty good runs! That's quite the effort. I think your difficulty with the long run was due to you running 12k at LT pace the day before. You'll see that your long runs will get better.

Oh man, you had to run up a hill to the finish line twice in one day!? Congratulations - excellent times on both races.

I would definitely like to participate next year, but probably in the 8K OR 5K. Not both! I would have had a hard time lining up in the starting line after just running an 8K.

I hear they have great swag?