My last warmup runs a few days before Toronto Marathon left me feeling slightly confident. The soreness after Chicago was going away. My legs, which a week ago cramped up in the heat, felt a little sore, but I was more occupied by the wind. It was blowing strong, in an easterly direction. Not a pretty one given the out-and-back nature of the course.

My pre race movie was Running the Sahara and it gave me some perspective. In it, the three runners do an average of two marathons a day for 100. Perspective like this, and memory of feats like those of Dean Karnazes or Terry Fox made my back to back seem almost easy.

Easy to run, sure. To race was another thing, which is why I was shaking my head when I lined up behind the 3:30 pacers with a 3:40 band on my wrist. My legs were recovered but I wasn't feeling fresh. Yes, it felt like I'd just run a marathon a week before. I started off trying to run easy. Almost immediately, started to baby my right heel, which is in far better shape it had been a month or so earlier, but still on the mend. Enough of a tingling to tell me to run easy. No worries, because my legs were in no move to go fast.

But being part of a stream of runners, you tend to just go with the flow. During this point, a friend of mine, Peter, gained on me and we chatted for a few minutes before I told him to go ahead. My mantra of any marathon is that the first half should feel effortless.


We were running on to the highway and past the SkyDome, and I had the first of several pangs of worry that I should not or could not keep up this pace. But I just tried to put away the thoughts as we were running into the wind. Focused on running behind runners, drafting off of them. A few kilometres later, I took my first gel and started to go on the lookout for the leaders on their way back. Amazingly, Reid was running with the lead pack and we all cheered out. Later on, saw my buddy Lee, who ended up with a rocking 1:21 half.


It was a few more kilometres until the turnaround when the wind would be at our backs. Around this point, the 3:35s came by and passed me, which struck me as fast, so I decided to let them go and made the mental note not to have the 3:40s come behind me. Not yet anyways. The wind pushing us back felt great, and I was pulling in pretty good splits, at or around the speeds I was running last week in Chicago. At this point, I noted that the crowds were extra great this year at some of the cheering sections. Very good omen for the rest of course. 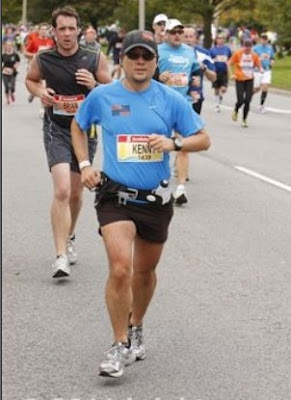 By this time, I decided to take out my headphones. LETS MARK THIS MOMENT, SHALL WE? The first time ever in a road race I have put on headphones. I knew that the last half of the marathon would be a little lonely, or so I thought, so I busted them out and put on my marathon playlist that I quickly put together the morning of. It only had 16 songs (too lazy to hunt for others in my Nano). I was noticing that a lot of the half marathoners were running out of steam, so I just kept up the pace and enjoyed the tailwind. Started to pass runners.

As we neared the point where the half and fulls split, I was feeling a lot better. And as we turned into a smaller crowd, I suddenly realized I was running very close to the 3:35 pacer group. So I joined and with my pace taken care of for my by the group, I just started to pound out the miles with this group. Was happy to have that distraction.


We run right in front of my condo, and I had a split second of putting it in for the day (it was an actual thought, but not serious) and noted that I had a freaking long way to go. I thought about the fresh looking fellow runners and how they'd had no idea one of them just ran a marathon a week ago. I worried slightly about what would happen if I should run out of steam and suddenly stopped. Then I just kept on going.

We had the first of three out and backs, and I started looking out for other runners that I knew. I saw the 3:30s and Marlene running a little bit behind. I thought about her going for 3:30 and was very proud as I pointed at her and we waved. I saw Sam a little behind that and hoped we didn't catch up to her.

I was impressed that there seemed to be a good showing of runners (in all, more than 3,500 did the marathon) and it showed a little later when a woman tripped and fell and we almost ran over her, it was that tight. Meanwhile, the pace bunny was doing his job and we kept up the pace. I didn't feel hard, but I tried to shut off that it was only barely past the half.


My next job was to make it to the 'wall', down Leslie and up again. The pacer had a friend who joined him (someone who looked fresh) and they chatted away. I'll have to admit, it was a little annoying to have random chatter from this 'hey, i'm running only 10k with this group' runner while our pacer got distracted. We were starting to make ground on other runners who had either slowed.

I've run enough marathons now to know to expect the march zone, when you start to encounter runners who start to walk. When you're with a pace group or if you're running at a good clip solo, it's invigorating to run past them at the same time that it is a little difficult to start weaving through the crowd. If you're on the receiving end, it's even more devastating. I do not like reaching this point no earlier than kilometre 35.


A final push to the most easterly portion of the course at the Beach. I had not run Scotia full since it added this portion, and I was really impressed by the crowd support. It was pretty amazing for a Toronto race. As we were running it, we encountered some rollers, not tough, but enough to remind me that I was indeed embarking on another marathon. If a taper period gives you that added spurt of energy to run hard the last 10K, then I was discovering this now.


Until one moment, I just stopped into a walk. It was somewhere into the 38th kilometre, and I felt just spent. No cramps, just a little bit of an exhaustion combined with no will to fight the end of the course. I began to take walk breaks until I felt okay enough to break into a ruin. When I hit this point at some marathons, I don't turn into a jog as that would turn into too painful of a long stretch, plus it doesn't feel natural to go that slow. So I would walk for a bit, then run at some sort of pace, the break again. This continued for a bit before we hit the bridge over Don Valley Parkway. 38 5:20.1
39 5:53.5
40 6:15.3


I spotted my buddy Sam in the distance, and I knew that by catching her, I probably caught her on a tough day. We were both going at slow speeds, and I finally caught up to her about 2 kilometres from the finish.


We ran for a little bit, and a chipper friend of hers came and said something along the lines of 'lets run!' Don't say that, people, to clearly suffering runners. Just stay silent, and run with them at their speed.

I soon got separated at a water stop, and not wanting to lose momentum, I started to run again. The crowds at the last bit helped me get my pace back up, especially since I knew I was less than two miles from the end. 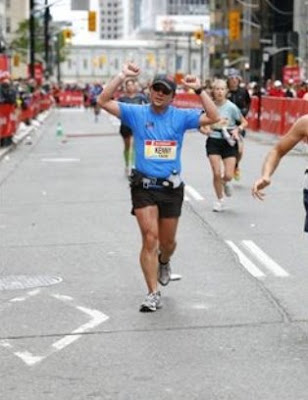 The final kilometre felt like it went by in slow motion. Of course, I was not running at marathon pace, but my watch checks surprisingly said to me that I had plenty of time banked under 3:40. A final few turns, and I found myself running toward the finish. I won't lie, it felt great to see the finish line.

Truth is, I very rarely get the 'emotional' reaction to the finish line. I just had the hunger of knowing that the end was almost near. 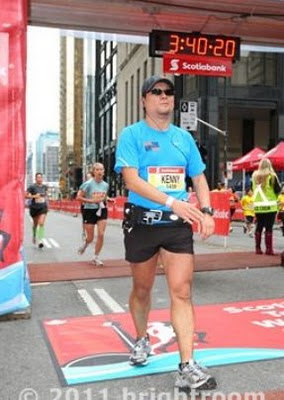 You've read about the bag-check fiasco that almost led me to forget this race.

A very decent result, faster than Chicago and my legs were put in a good place that I can probably end my October marathon month with a decent MCM.

Also worth noting that today, Oct. 22, is the fifth anniversary of my first marathon. Five years and 17 marathons later.. Two down in October, one to go: I was overdue for a "crash-and-burn" race, but didn't think it would be that one, or that it would happen so atrociously. EIther way, it was so great seeing you during the last couple of kilometres - it helped take my mind off the pain.

When are we going to race together again? We need to have fun the next time!

Good work and thanks for sharing. We must have crossed the finish line almost at the same time. I agree running the Sahara is great inspiration :)

Great post! Way to battle through the run. Good luck next week!

You had a great finish congratulations! The last few KM's were a killer this year...

I have really enjoyed the new out and back in the beaches on the changed course. Much better than the spit.

It was good to see you out there! Remember when you ran a few minutes with me in 2009, for my big 4:26 PB marathon?! Crazy... thanks for all the support over the years.