Around the Bay elevation and hills

I took a look at the elevation profiles for the last four Around the Bay races and for anyone asking if its a net uphill or downhill course the answer is you gain some and you lose some. The definitive answer seems to be it's an uphill course, but not by a lot.

The Around the Bay elevation for three out of four races showed that I gained around 670 feet in uphill with anywhere ranging from 600-to-650-feet drop. Last year's elevation info, from my Garmin, showed only about 650 feet of uphill and 613 downhill. Why the spread every year? Well, for one thing, we know that GPS watches aren't close to perfect when it comes to elevation (though they are pretty close when it comes to distance).

Here's how my Garmin recorded the last four Around the Bay hills.


I'm inclined to agree by looking at my multiple runs that it looks like the 700 feet climb (and fall) seem about accurate. Though most of the first 20k is flat, there are subtle rises and falls throughout the first 13 miles.

The Around the Bay elevation chart does show the hills from 20k to 27k take their toll. The screenshots from the past few years show the general breakdown of kilometers and the uphill/downhill.

There are basically three 'steeper' drops as well, the first is a series of rolling hills you get when you're into North Shore, right before one of the first steep rises.

Here's one of the major hills, one that leads up to Lasalle Park. My Garmin shows around a 90 feet rise over the course of this hill.

Here's an elevation chart of the hills of Burlington. It begins shortly before the half marathon mark, where you see two 'V' shapes. The rise/fall/rise referenced in the two pictures above is reflected around the 13 to 14 mile mark. 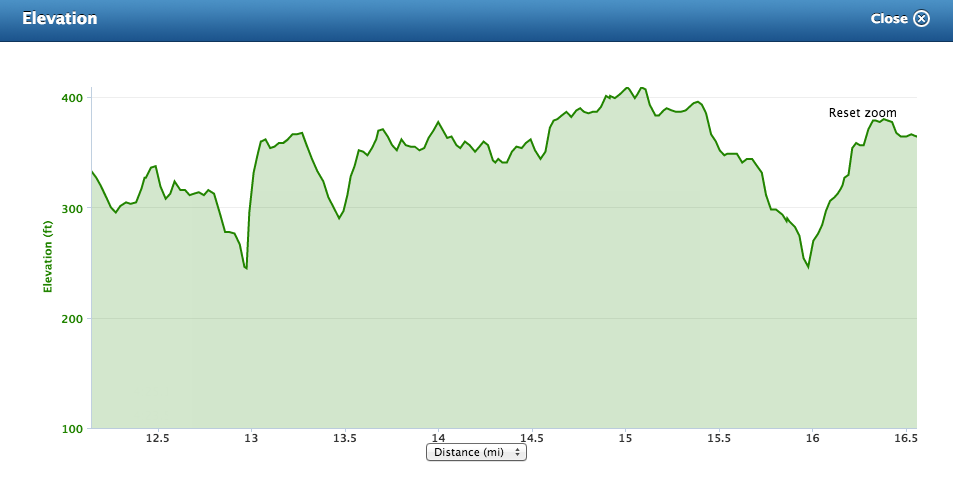 You're all probably looking at the big 'V' that begins its plunge around the 15.5 mile mark. That's the most discernable drop before Valley Inn Road. That last (and for most of us the soul sucking part of the race) shows a rise of about 110 to 120 feet. What you probably notice that from the cemetery to the bottom of the valley, the drop is greater than the uphill. Technically that means that any speed you may get from the downhill could in theory be negated by the uphill section (see video of the uphill)