On Saturday, I piled on the layers and ran 17K while it was -15C, -24C with wind chill. Chilled to the bone. Today, I wore my sleeveless jacket and did 10K with temperature of 8C. Yesterday, 5K in the rain.

All told, I would have preferred the cold in some weird way. Give me winter before the spring thaw.

In all the many winters I've trained through, this type of weather swing is something I'm not used to. The snow, wind chill and drifting blowing white stuff and I have been good friends. Something about the tough climate gets the spring marathoner in me going. I think about all the hard miles and how it'll pay off in the months ahead. I build up the bad-ass quotient in a big way.

While I try to build the toughness, tonight I signed up for my 19th marathon: the Ottawa Marathon in late May. This is the biggest race in the country, and I'm looking forward to what everyone raves is a first-class race on a gorgeous course. No post-marathon baggage lineups I hope.

The marathon crowd was definitely in full prep mode this weekend. Boston training has begun, Goodlife and Mississauga are coming close and Around the Bay is on the radar (mine too). Sunday was a perfect day for running. It was still cold enough to scare most runners from tackling the trails, yet enough of the rest of us were out there. It was a sunny cold, crisp winter morning. 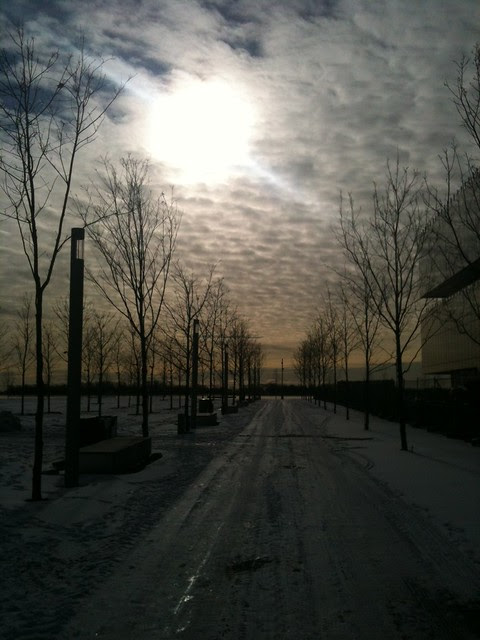 Two things I can say about tonight's run: That it was an epic milestone run and I almost broke my ankle trying to mark it.

The Garmin and I have been through a lot, these past three-plus years. Garmie, as I have called him, has gone through countless stops and starts as I wait (not jog in place) at stop lights through the many cities I've passed through.

He's outlasted at least 10 pairs of shoes, collected for me 15 marathon medals, kept pace through many PBs. He's seen days when I'd do tempos, track work and put him into lap mode. We haven't played with the virtual parnter. In all but a few runs, he's accompanied me on every run, and I've even waited patiently for him to charge up if I forgot to plug him in.

Truth this, I don't often pay too much to him during my runs. If I run for 50 minutes, as I did tonight, I may glance at him a few dozen times. He prompts me to run a negative split to get the average pace lower.

Just the last two weeks, he's been taken on his 10th or 11th trip around Central Park, days after visiting a running path in Tobago. Funny thing about Garmins, they remember everything, like the first day I tried Garmie out, on Sept. 11, 2008 exactly, on a path on the National Mall in DC.

Truth is, all I really wanted to do tonight was to mark the 10,000 kilometre mark. Garmie has had a strap replacement, but other than that, he's probably good to go for quite a few more laps.

But like a proud parent, I thought today I'd grab a picture when he crossed 10,000 as a reminder. So unlike most nights, I kepted on watching the watch, which is why when I hit a pothole on the sidewalk somewhere around the 5 kilometre mark, I cursed myself for the stupidity of it all.

Stupid to risk spraining, or worse, injuring, my ankle all while staring at the watch while keeping my eye on the road. How silly, I thought, that I would have my first such injury while hitting the milestone. How ridiculous it would be to go on hiatus over a silly picture.

But as I flexed my ankle at a few stops, I was regaining hope that all was well.

I have a new watch that's ready to go, really. My spanking new Garmin 610 has a touch screen and other cool features I'll probably never use.

So that's why, at some random corner on Bay Street, I stopped and took two pictures.

This is the second one...