Been pretty terrifying looking at what has happened in New York and New Jersey this week. I was grounded in DC for three extra days because of Sandy and while the wind was fierce and it was a little scary, this was the worst I saw in D.C.'s Northwest. 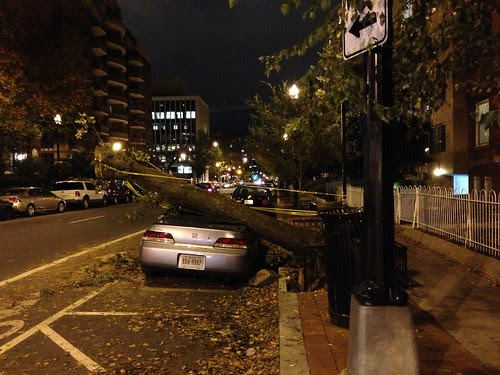 I ran the Marine Corps Marathon just hours before Sandy's outer edges reached the D.C. area. This week, days after saying the New York City Marathon would go on, the mayor decided to cancel it on Friday, just two days before the event.

Running friends on Twitter were already on the way there. I reached out to Fran (who I've known for years and ran Boston with in 2010) and others are in New York. The backlash against runners was hard to watch unfold, but like the way runners are, I'm happy to see them do what I knew what they would do. Step up.

The running community is strong, and there are tonnes of great people. It's an open sport we have and I'm glad to see Fran and others try to adjust.

I wrote a piece on Francis and Frank who I interviewed today over the phone. First time I talked to him even though we've been tweeting for years.

Here's part of the piece:

Francis Ng was ready to run a marathon in New York City on Sunday but now the Toronto marathoner is instead looking to pitch in as the region recovers from this week's massive storm.

He's just one of the many Canadian runners who found out too late that the New York City Marathon was cancelled, a race that draws more than 47,000 entrants.

Other athletes from Canada and many from around the world were already on the way to the Big Apple when the mayor's office cancelled one of the world's largest marathons. The 2011 edition of the marathon drew 1,200 Canadians and more than half of the race's participants are from outside of the United States.

Ng found out at at the departure lounge in Toronto that the race was cancelled, so instead of running through the five boroughs on Sunday morning, he's now looking to make a trip up to the Bronx to volunteer at Pelham Bay Nature Center.

"Runners seem to all be disappointed, but they all seem to understand the circumstances," Ng said in an email from his Times Square hotel. "Everyone's in the same boat so it seems to be a good bonding issue for runners."

Read the rest here.
Posted by yumke at 6:08 PM No comments: