Barefoot on the beach 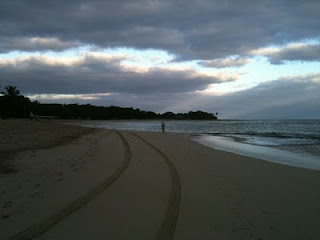 We're spending a restful week in Puerto Plata before resuming winter and the marathon training. Today, finished off my year with three separate barefoot runs. The first was a morning 5k in my Vibrams, then a 7k barefoot followed by a dip in the ocean. Finally, a 2k before a late lunch. Just so I could set some resolutions before 2010 runs out, I found out I'm going to be a pace bunny for a half marathon in a little more than two months time. Tomorrow intend to start the year right with another beach side run with plenty of strides thrown in. Happy New Year!
Posted by yumke at 7:14 PM 6 comments: 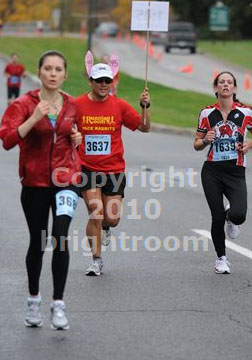 Believe me, I've looked for winter running shoes for a long time. Gave that up years ago, I just use my good old usual Asics and live with the cold feet and on occasion the Yak-Trax I clamp on during my snowy and icy runs.

Yep, that's a spiked outsole. And I'm also excited by the "highly water resistant upper". Of course, I really can't use the spikes until it the weather gets to that point.

Running is going well. I've decided that I'm taking these Christmas weeks (last week, this week and the next) a little easier so that marathon training, while on the horizon, is kinda on hold. That's fine, I'm still hitting the 30 mile mark but I'm not going to give up family time for running. That is, until I get stir crazy. That's bound to happen.
Posted by yumke at 9:24 PM 1 comment:

There are favourite runs you look back on years later, and in a way they define you as a runner.

Tonight didn't quite rank up there, but in mid-stride in my winter's first snowy jaunt, it made me remember why I run.

Years ago, before they started clearing the waterfront trails of snow, my winter runs were always a little adventurous. One running memory I conjured tonight -- while the snow lit the foreground while after-work commuting cars brightened my periphery -- took me back to a midafternoon about four years ago.

Back then, with no snowploughs to clear the running and biking trails, a six or 10 mile run on the waterfront on a snowy day meant you might as well put on some snowshoes.

While it made running hard with the lack of traction, I always imagined myself as a little pioneer, making tracks that I would use on the way back, footsteps that blowing snow would hide, but for an hour or so, it made the next runner's adventure a little easier. It was even more fun when I was forced to run with Yak-Trax, those clip-on cleats. It made running more like playing, and who would argue with that?

Tonight, I passed the snowplough that was to clear the way for the snow-covered trail ahead. It was stalled, loading up on salt. I silently cursed it but minutes later, I was loving making my own tracks. I soon followed the footsteps of another runner. Those footfalls were far apart, suggesting the stride of a taller runner. A few miles melted away while I looked down and played in the snow.

On my way back, the snowplough caught up to me, and I waved to the driver, getting back on the trail he just paved. I raced up the hill, beating the cars slowly inching their way toward downtown. A cyclist approached, avoiding the paved road, opting for snow. He was playing too.

I finished the run faster than I started it, my balance barely there, every step a challenge, on the verge of falling. Those tracks showing a runner at play are probably covered up by now, a route that no GPS entry can do justice.

Oh, and did I mention? Marathon training. It is on.
Posted by yumke at 9:09 PM 4 comments:

God I hate those runs. At the beginning of last winter, I tried that exact run. My knee was aching, and I barely made it through 3 miles at slower than tempo pace. I stood there after barely 5K of 6.4K and just about threw in the towel for the season.

Well, that's only partly an exaggeration, as I didn't give up marathon training. I went on to run the big race, and ran four more marathons last year, but something about that tempo run told me I needed a break from that 'work' that needs to go into fast marathoning.

Next Monday, my next training cycle begins for my April marathon. In the next three days, I'm going to pull out Pfitzinger-Douglas's Advanced Marathoning and plug in all the scheduled runs for 18 weeks. It'll include those dreaded tempo and pace runs, the ones I love to hate, but hate to miss. They hurt bad, but when you're finished a month of training with them thrown in, you're a stronger runner. You get freaky fast.

Last year, I listened to my body when my knee said 'oh no' and when my head said 'again?'. Was good to take a step back. They say that you build up for three or four weeks, then take a week recovery. Well, there's nothing that goes against the idea of going hard for four or five years, and taking a year for recovery. That's what the end of this month feels like, like the end of an easy year. In fact, my mileage this year, probably targetted around 1875 miles, will be much lower than 2008 (2240 miles) or 2009 (2120 miles), though it'll higher than 2007's 1600 miles.

I see my return to speed as a year-long project. I don't know if I can get back to where I was in the fall of 2009, but it's also not my goal to get there by April or May. I want a decent, fast-paced spring marathon. Give me a sub 3:20 and I'll be ecstatic. I'll take that and build momentum in the summer. First step, 4 miles at LT, next week.
Posted by yumke at 9:17 PM 2 comments: