Ice storm and my Yaktrax

While moving this past fall, I almost didn't pack my Yaktrax, those rubber and metal strap ons. I had survived most winters with barely a reason to put them on. Luckily I realized I'd probably need them one day.

Even on a group run this past Wednesday, I was talking to another runner and telling her about the Yaktrax. "You really can't use them much on Toronto roads," I told her, citing the concrete and asphalt surfaces that don't often get too much of a layer of snow.

I didn't read the long-range forecast. We got a tonne of freezing rain overnight, and this morning, a coating of ice covered any surface that could accommodate it -- roads, branches, signs, cars, railing, lights and the ground.

I worked a little updating coverage, then decided to give myself an assignment of  getting some fresh art. I decided to abort my long run in favour of a 5K or 6K run, enough to continue my running streak and to let me play on the icy streets. 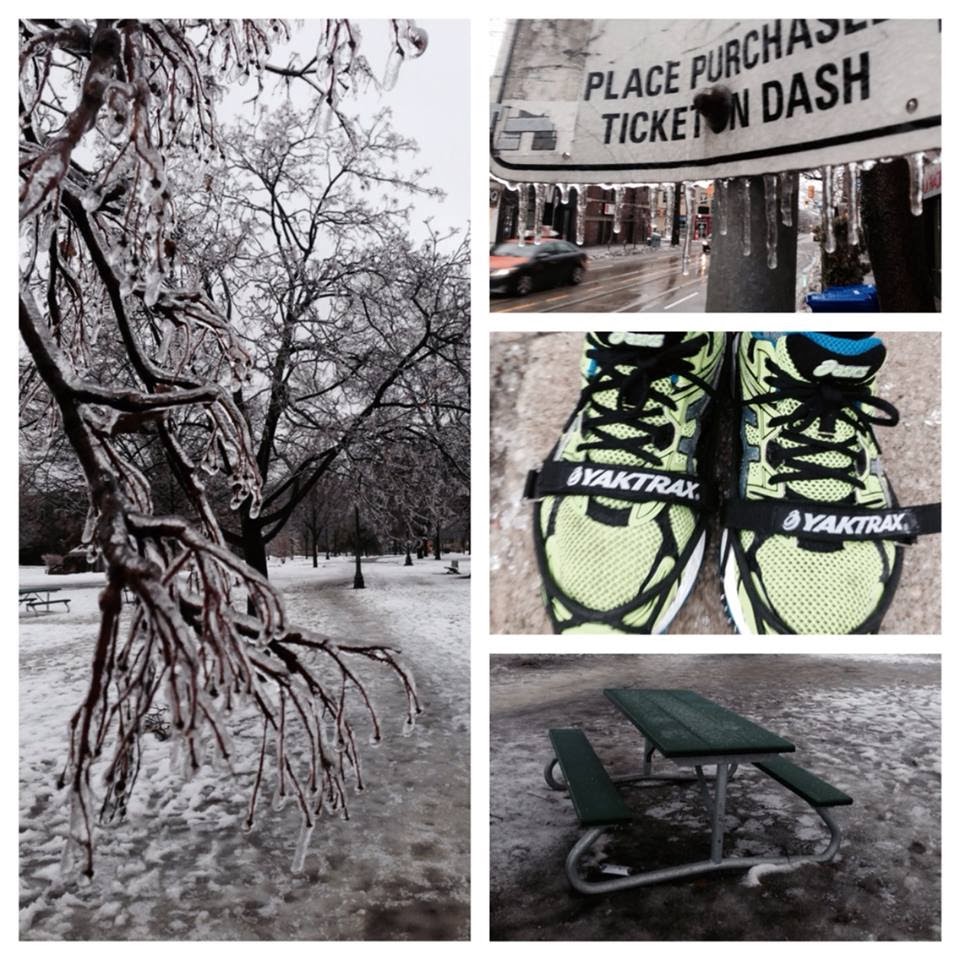 We hit reset on our watches every day, while the weekly schedules reset and what was a big running week on a Sunday becomes a big fat zero on Monday morning. Running is a sport that lets you accumulate, build, add step by step, then ultimately, we wipe the slate clear.

There are so many other reasons for running, of course, but I find it amazing while running my same routes -- up and down the downtown streets or back and forth on the water's edge, that it actually adds up to something. This morning's run was more than the 10 miles that I logged at the end of a route that saw hills climbed, sidewalk and asphalt passing by and bumping into a running friend at a stop light (we weren't bouncing). At the end of the run I see time (1:15) pace (7:33 miles) and distance (16.12K).

Add it all together, zoom out to the wide view, and you see something much different. Although this was a higher than usual mileage year, most runners training for marathons pile on hundred of miles a season, even up to 200-300 miles a month. Recently I passed the 2,000 mile mark. Today, I passed 2,046, or more than 3,200 kilometres. If I flew the distance, I mapped out where I could have travelled in that one year.

Amazing, isn't it. In about a week, I would have travelled as far as it takes to fly (as crows do) from Toronto to Vancouver, or most of the United States.

Pull out beyond the 50,000 foot view, and you look at the steps and how they add up to something much bigger, something much more impressive to many who may nod when you say you went for a run for an hour, or are on a running streak.

An hour over a day can add up to 16,850 minutes, or two hundred and eighty hours on the roads. A hundred or so calories burned over a mile adds up to 234,618 and while I don't remember many hills, 92K metres kind of seems like a lot.