The footing was precarious as I gave pursuit around that second lap of our interval workout. It was four days before I was to tackle the rolling hills in Folsom, two days till I boarded a plane for Sacramento, California. But tonight, as the asphalt that was 10 minutes ago wet was now frozen, I gave chase as we curved the down and ups of High Park. I was nursing a sore hamstring but found an extra half gear to power down and up the hill. Chasing a teammate, eventually coming alongside stride for stride, even as we were nearly slipping with every stride. Chasing so we would reach the finish faster.

"Sorry about the weather," the hotel employee said as I checked into the hotel on Friday, my leather jacket draped over my backpack. I was your typical happy Canadian who was escaping the beginnings of winter, where 16C with cloud cover might as well be a heat wave.

The California International Marathon has been on my radar for years and about 12 weeks ago, it became a backup marathon when I pulled my calf and started to look for a later marathon. It features rolling hills, a net downhill course and likens itself as the fastest course in the West. Not that I'd know, as I've never raced any marathons in the west or in December. 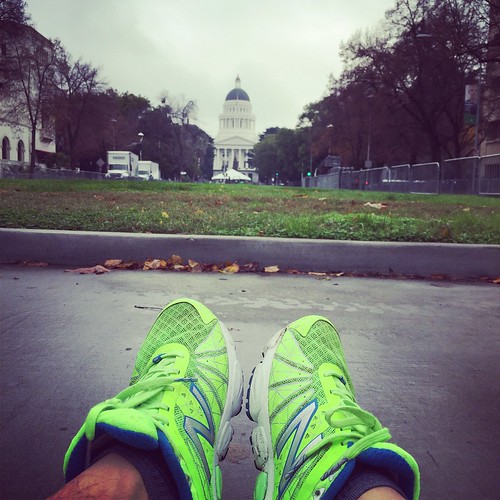 My teammate and training partner Julia had pegged the race as her goal marathon - I remember her telling me during a winter training run 11 months ago about this race in Sacramento. One of her friends, and fellow teammate, Naomi was also running it as her first marathon. So when I pulled the calf and started to look at options, CIM became the best choice. Running vacation with friends and enough time to ramp back up if I raced Scotiabank. So on Oct 1, I signed up under their guaranteed entry program.

I ended up racing Scotia in late October, my calf healing enough for me, and I decided to say, screw it, lets go for it. The race was a PB, 3:07:20. Looking back at the summer and year of training, I always felt that I had 3:05 fitness in me. Seven weeks ago as I started to ramp back up to CIM, I had no clue how I would treat that race. I was able to get my mileage back right up to peak form after a recovery week. Julia and I nailed our long runs, doing a 38k and about 35k four weeks out. My calf was getting better and about three weeks ago, I was finally able to pull off faster than 5k pace for the first time since late September. I was, crazy enough, still fit, aside from an upper left hamstring and groin soreness. More important, I was still training to run fast.

On Wednesday I did a quality workout where I was testing 4:05 and 3:55 pace. Some of the runners I was running with were gearing up for a 10k. I worried slightly that I was pushing it right before the final taper but I wanted to see what it felt to run fast. I concluded that I could push, but the next day I felt the pull of my hamstring, the soreness associated with running hard. I took it slow the last three days but still, it felt good to chase.

Twenty minutes before meeting my coach a few days before the race, an email landed in my inbox from her with my prescribed pace. It called for a faster than Scotia, or a 4:25k for a 3:06:30 finish. We spoke over coffee and after assessing my fitness and condition, she threw in the first of many mild suggestions. "This is a good course to go for a fast time," she said. I told her I was so proud of the work i'd done this year but her point was well taken even if this was a no-pressure race.  Later, a friend at BlackToe who had run CIM before also said the same thing - that CIM was a fast, but beware too fast a start and trust the pacers. I left convinced that I had three choices. Run a controlled marathon at 3:10 to 3:15. Think about running with Julia who in the end needed to run her own race. Or chase a personal best on that course. Chasing was, by Friday morning, a small and gentle voice. 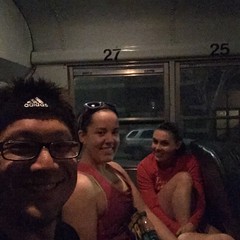 On race morning, the three of us stood in line for the bus that would take us out to the start line in Folsom, as CIM is a point to point course. We sat in the back of the bus and chatted up a Calgarian, and the Canadian contingent was talking about the weather (perfect, 8C climbing to 12C, no wind), the course (downhill but rolling, emphasis on rolling,with a flat final 5 miles), the occasion (it was Jules's birthday) and the portapotties (there were many). Later, someone asked us to push up the window as it was chilly, but for us, it was near perfect for racing.

Exiting the buses we only had around 40 minutes to do a washroom break, a group selfie and then we dropped off Naomi with her pace sign while Jules and I headed to the 3:10 sign. We stood there, hugged, pumped up for a morning of racing. I knew she was situating herself behind the 3:10. I looked at the 3:05 bunny, wondered what if.

The sun was rising and I could feel the perfect chill against my shoulder. I was wearing my favourite singlet, tattered and worn in by age and races. I clapped my gloved hands more to pump myself up than warmth. Then it was time to race. 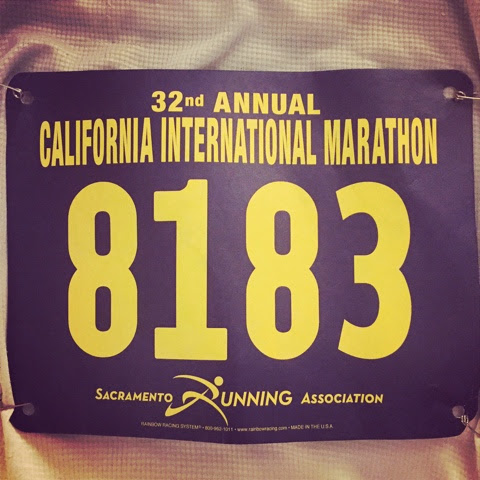 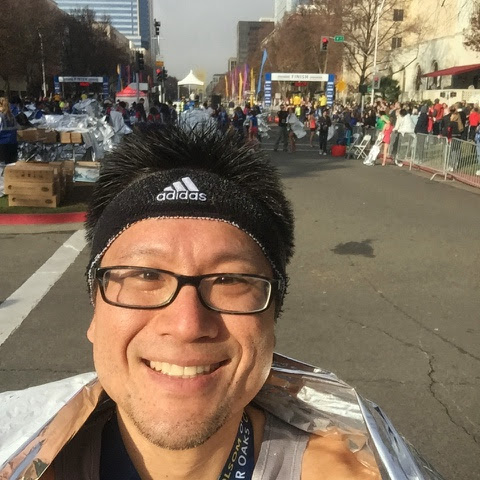 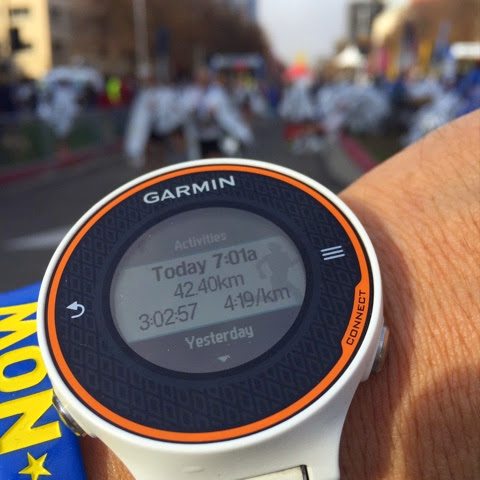