The fear was real.

It started sometime after noon, a full 8 hours before I was to run my leg at the Cabot Trail Relay in Cape Breton. I was griping a rock found beneath a road barrier, and alongside my teammates, we pounded them against the railing, creating a rhythmic clanging sound. We watched my coach Rejean storm up Smokey Mountain for two kilometres, running full out at 5:15 kilometres.

We later watched him win leg 4 and as we were buzzing about that amazing performance, I was starting to dread my decision to sign up for leg 9. Nine was a killer. Nine was the hardest leg, apparently, of the 276 km Cabot Trail Relay.

***
Our Pace and Mind mixed team was lucky enough to get picked to be one of 70 teams to run this annual event, now in its 29th year. None of us had done the race before, but we all knew about this legendary road race. Starting at 7 am and ending more than 24 hours later, the relay departs Baddeck and loops the Cabot Trail. The course is jaw dropping, and the relay is organized as 17 separate races. We watched at one of the legs how the race organizers set up and tear down a finish/start line in no more than a few hours, only to head down 12-20 km down the road.

As first timers, just getting 15 runners and two support crew to Baddeck and then organized for the 24-hour event meant that running and strategy fell to the wayside. Our team was made up of distance runners, most of us marathoners, and most of us were past our goal races, ranging from Boston in late April to Mississauga in early May.


As the day went on, I couldn't helped but be awed at the scope of the distance we'd be travelling. As we went down the course, little bumps on the course maps were genuine hills. The big climbs, like in Rejean leg and later Ivy's leg 7, showed that there was a monster lurking. That monster had a number on it.

***
I first heard of leg 9 when I started hearing about Cabot. My friend Jules had raced leg 9 a few years ago. I remember that because she described the uphill and the quad-thrashing downhill. She had said she'd never seen faster splits ever appear on her Garmin. She described running nearly uncontrollably down that mountain.

In sheer height, the 464 total metres of climbing North Mountain in leg 9 is higher than the Empire State Building or the top of the observation deck of the CN Tower (where Drake is famously perched).


I arrived at the start of my leg about an hour before the race. We had a three-car convoy with one car as support (picking up runners) and the other two on the way to the next leg or just supporting and cheering on the course. The beauty of it is we could see all the legs before ours and get a sense of the course.

Leg 9 starts off at the base of North Mountain, which means you can see it looming in front of you. It also means that you start to immediately climb it for 6.2km. Because the leg was the first 'night leg', I was to wear a safety vest and also have a headlight. It was likely that I would finish the race as darkness was falling but the light would make me visible. 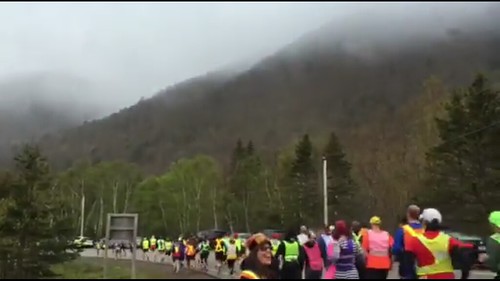 The temperatures during the relay varied from warm to misty and straight-out cold as we faced ocean breezes. As it was misting when I arrived, I opted for a double singlet, the vest, shorts and arm warmers/gloves. There were three water stops during this 17.8km leg.

I watched Caroline finish the leg on a thrilling steep downhill, followed by an 8 metre finishing chute. By 7:55 pm, we were beckoned to block the road, given quick instructions, and promptly told to start

Thing is, I'm still never sure if I'm actually good at climbing hills, but not for the effort or training. In my leadup to Boston, I had trained for hills but even that 42.2km course is not nearly as hilly as leg 9 (150 m vs. 464 m). In the weeks leading up to Cabot, I was only doing maintenance mileage and throwing in my weekly spin classes, where I would do most of the 'hill climbs' out of the saddle with no rest. I knew it would be nothing in comparison to 32-34 minutes of continuous climbing 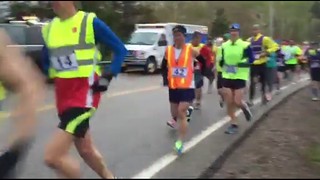 The first two kilometres were done a bit faster (4:25 and 4:58) but represented not as steep climbs (35 metres and 47 metres). The field quickly separated and I was a little bit surprised to see about 16 runners spread out ahead of me, some in the far distance. Cabot has a huge spread of really fast runners and I knew i'd be mid-front pack but some runners were just hammering the hills.

My strategy was to acknowledge that I would have to run by feel -- that 32 minutes of climbing could see me red line. As I hit the third kilometre and saw the seemingly neverending hill, I knew I had a long ways to go. By then, I dipped to a 5:26 kilometre with a climb of 80 metres. I could feel the redline coming, so I slowed so a runner behind me could go ahead. My thought at that point was this was a three part race -- climb, drop, rolling. Little did I know there was a fourth I hadn't quite anticipated.

The fourth kilometre shook me, not only for the 62 metres I climbed and seeing the pace drop to 6:26 km, but I could see the winding road ahead of me. My breathing didn't feel right so I did a few walk breaks, thinking I could make up that time on the downhill. Number five, at a whopping 142 metres, was a doozy -- 7:22 kilometre. It pretty much felt like I was climbing stairs at this point.

Things improved as I started to crest. I knew I wasn't overdressed and was ready to get the legs moving. The hill, which I'll never soon forget, was completed with a 5:35 km.

So I got my legs underneath me, and I focus was to use the flats to get some pace back. I wanted to get the wheels turning, to turn up the cardio effort back to a comfortably hard notion. It helped that there were some cheer stations at this point so I was able to do a kilometre in 4:08, even with a slow rise.

But, of course, there really is no big flat sections on this leg as I could see the cars ahead of me fall, then rise. Another hill, which I was able to navigate at 4:38. I knew this next section was coming fast, and I would have to figure out how my legs would deal with that plunge.

A friend of mine who navigated leg 9 told me to expect to run almost uncontrollably. You were literally thrown down a hill, and with every step, you had built momentum. Downhill running works well if you know how to run them. Get your legs underneath you, lean as much into the hill, and leg the gravity and momentum do the trick. 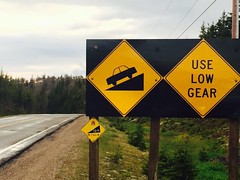 I'm a high-cadence runner, which is to say that my wheels turn over very fast. I can go 200 steps per minute without real effort. As for downhill running, this helps get my legs down on the ground even as it continues to come up at you. All runners, though, are going to get the quads thrashed in this manner and even so, it will pound. For 3,600 steps, I would be hurtling down.

With the winding road, I just let the course dictate the next step. I knew there were spectacular views, but my eyes were firmly focused on where I though the next two to three steps would lay.

My teammates caught up to me at this point and you can see me running down that hill, high cadence, focus on the road. 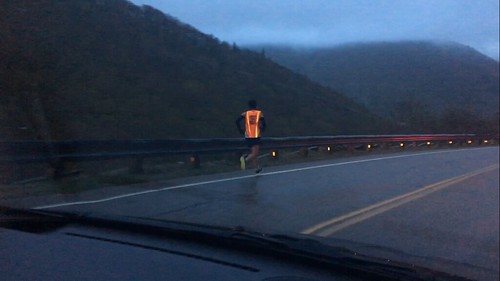 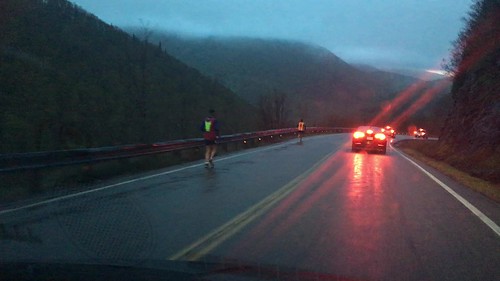 It didn't feel like a massive cardio effort, but I was spending a lot of time pounding down that hill, my legs absorbing all that shock. I finished off the hill with a 3:58 as the course flattened out.

As I finished the, I glanced at my watch and I could see that I had just ticked by the 13 km mark.

Oh great, more than four more kilometres, and it was anything but flat.

So yeah. Rollers. That.

I sometimes rerun a race in my head and this is probably the portion that I would ask myself for a do-over. I hit the first kilometre in 4:19, which is somewhere between half and full marathon pace. I willed my legs to have better turnover but I could already feel the pounding of my quads were not helping my running at all.

I wish I remembered I had a gel with me, because I probably could have used some sort of a boost. And by the way, since I passed one runner on my way down the hill, there was NO ONE I could see ahead of me. It was pretty stunning how the field could spread. I had no one to chase down, no one to measure my effort against.

It was a ghostly view of a sunset against a horizon of mountain peaks. It was a little spooky, so much so that a puddle of water ahead 50 metres prior was some sort of small animal. Was my lack of sleep the past few days catching up? Had I lost the race pace I usually know well?

In the distance, I could see another big hill in front of me, and the glow of neon sicks that served as directional lights. I climbed the hill towards the finish, which is a fast right hand turn directly into a parking lot of a restaurant. 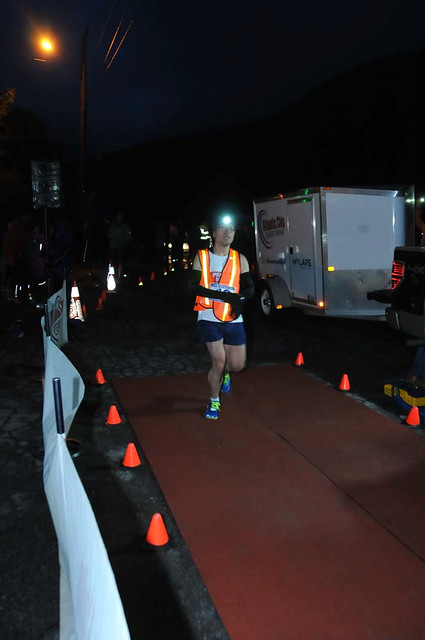 I feel funny writing a race report because for me, leg 9 was just one of the small pieces of an epic weekend. By the end of the relay, we had raced 276 km and came in sixth overall, second in the mixed division. I'm so proud of that, moreso from the fact that everyone gave their all, everyone helped one another. My team, which I already think has an amazing bond as I've run hundreds, even thousands of kilometres with these folks, bonded as a unit even more so in the ramp up to the race and in the afternoon and evenings after where we talked about the amazing weekend where we ran a dream race. 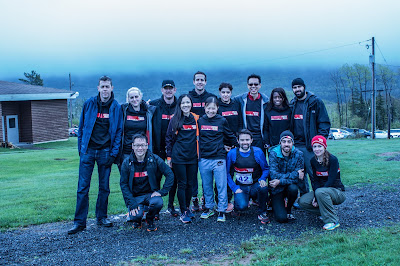 From all indications, the organizers liked our energy, spirit, teamwork. We hope that means we'll be back sooner rather than later.

Cabot is so much more about one race, but a weekend spent doing the best sport in the best way -- with other people passionate about it. I'll be living off the highs of this event for a while yet. 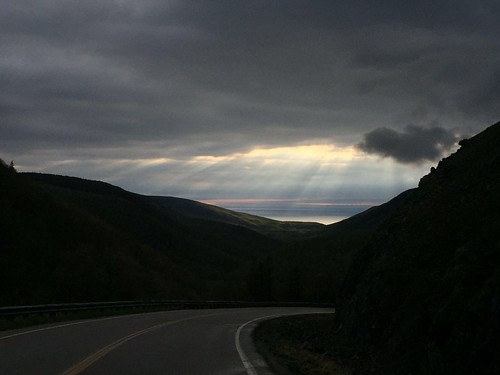