When many of us race, we may find ourselves drafting other runners. Single file, you may plunge into the course, finding comfort in the group and respite from the elements ahead.

On many a training day this past season, the winter throwing layering penetrating, bone chilling gusts, I took solace in facing the vortex with others. On one occasion, there was a stretch of road, not more than 2 kilometres long, where the wind was fierce, and it was no small task to stride into it.

So we took turns running into the wind. Single file, two of us took on the wind, while others took shelter. The pace never slowed. We were faster. 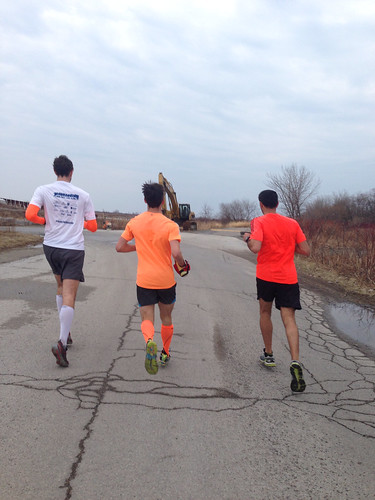 I've been advising a co-worker who just finished his first marathon. Through the course of the conversation, we both keyed in on what he found he loved about the training -- he finally got the alone time, the quiet us long distance runners find when we are in our own heads, only the road ahead of us and minutes -- no hours -- to wallow in, to zone out, to think, to analyze, to experience raw emotion and tune into your body, or to simply focus on the run.

I know the benefits of alone time -- it's what took me through 26 marathons, some 22,000 kilometres over 10 years. I even trained to my previous peak while doing it solo. For that, I will always look back at it -- and the accomplishments topped with a Boston qualifier -- with an equal amount of pride and wonder.

If solo running helps you discover more of your self, what does the other side look like? What can you find in a group?

I had to rip those arm warmers off. A kilometre earlier, they were shielding my limbs that are apt to get cold in the gusting wind, but now I was running into the sunshine, a honest tailwind behind me, they were getting on my nerves, big time. You don't want any negative thoughts this late in a race.

A few clumsy motions later, they were off, but not without a casualty.

I had dropped the wristband.

How could I leave it behind, after it carried me for so far?

So I stopped dead in my tracks, 36K behind me, less than an hour away from The Goal. I turned, risking sudden cramps. I wasn't going to lose it, it meant too much to me.

Most marathon experts advise even paced marathons -- run the first half pretty much the same time as the second. By doing so, you do not risk getting up to your lactate threshold levels until late (or never). The race will get harder as the miles pile on -- they always do, but if you try to bank too much, you are likely to blow up. I know this feeling, having had marathons where marathon pace was going great, and a kilometre later, you were going 30 seconds slower per kilometre. Then you took a few walk breaks. Then it was over. 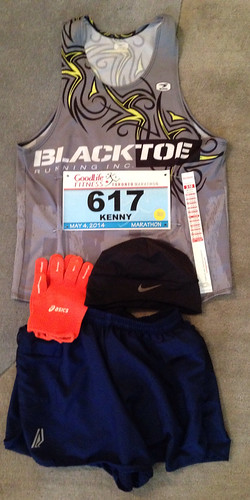 But this weekend called for anything but a negative split. The first half features a net huge downhill that even I'd advise runners bank a minute or more.

And then there was that wind.

The Toronto Marathon is where I PBed and qualified for Boston back in 2009. It's a net downhill course in the first half but it doesn't always necessarily make it fast. But it is a fast course and if you run it right, it can pay huge dividends. I put Toronto on my race calendar when I signed up with BlackToe Running in December. I told the coach that I wanted to get back to Boston. When he asked what time that was, I told him 3:10. In reality, I needed a 3:15, but Boston had a cutoff last year of around 1:28, which meant you needed a 3:13:30 to get in.

I've written about the crazy training in this extreme winter. I had, up to marathon day, also been on a 157-day running streak, had hit 200 miles or more per month for four months, and had set new personal bests in the 8K, half marathon and 30K. In my mind, being three for three in races was a massive deal, but there was really only one race that mattered -- the marathon distance.

Through the winter, my group got faster, that by the time were were talking marathon pace, the coach was starting to assign us 4:25 kilometres, or 3:07, or three minutes faster than that 3:10.

42 tips for the first-time marathoners

This weekend, I'm running my 27th marathon, my 97th road race. WHAT THE HECK?!


Today, I talked a runner through his first marathon, and realized there's a lot of pro tips I wish I knew... So, no fancy narrative, no GIFs, just this random list of thoughts. Here we go