A big snow storm coming in! 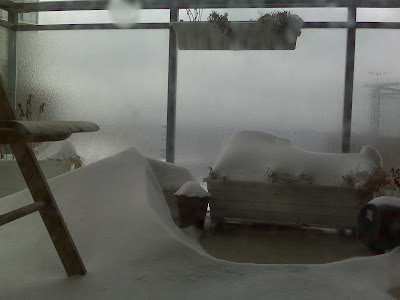 I'm getting my run in before evening today, because forecasters are calling for a massive snow storm. (Picture above is of my balcony after a recent snowfall -- more like drifting snow.)

A massive blizzard is expected to hit Toronto tomorrow [Saturday] night, bringing what forecasters say will be the most snow the city has seen in 50 years.
“In the past we’ve been wrong, and we’ve looked silly when the big storm got stalled somewhere in Iowa. But we’re pretty sure a big storm is coming this time around,” said OPP Sgt. Cam Woolley. “The storms seem to be quite genuine this year, but I think people are better prepared because of the ones we already had.”
The storm could bring upward of 25 cms to Toronto by the end of the weekend, said Environment Canada meteorologist Sarah Wong. The last time southern Ontario got 25 cms was 1944.

This should make running very interesting. I should actually look at getting a pair of Yak Trax.
Been a nice slow week of running. Did 10 miles so far this which is piddly for me and my fellow runners but it's actually taken time. About 30 minutes per 3 or 4 mile run, so I've gotten out there three times. Funny thing about this maintenance mode is that a coworker spotted me eating a small bag of Doritos and pointed that out. I said, "marathon training starts in January, so for now I can eat like a normal person." What the hell does a normal person eat anyways, really?
Posted by yumke at 7:45 AM

This is crazy! I have the Get a grip Advanced instead of the yaktrax and I like them a lot. Good luck in the snow!

v10 inches! Yowza. That will give you quite the workout trying to get around in that.

i've been thinking of getting some of those yaktrax things myself. I like the look of freezing rain when it coats the windows (except for on my car). It gives an interesting look to it.

Snow is actually a lot of fun to run it. It's the wind I really hate!

Sonia, i'll look up those get a grips..