I also run for the salt

I've been thinking about how well seasoned runners are. I mean literally. Besides the fact that I've been reading a lot about salt consumption (we apparently eat too much of it).

Like most people, I don't mind giving salt a fair shake. It raises the flavour profile of so many dishes. Without it, well, it tastes bland. Yes, it's bad for you. Well, most of us anyways. And yes, it tastes awesome (I'm loving my 'pink salt' my brother picked up in Australia a few months ago).

Runners crave salt. We possibly crave it more than carbs, even sugar, on some occassions. There are many reasons why we possibly do so. For one thing, we sweat a lot. At the end of a summer long run, I look down at my arms and while I cool down and the sweat dries, i'm left with a little dusting of salt. I actually licked it once. (Don't say you ever weren't curious). Yep, salty bunch we are. Maybe the amount of salt of my has to do with a high consumption, but I don't think I eat really an excess amount.. Okay, maybe I do.

We're encouraged to take in electroyles as runners. Any one who has experienced leg cramps in the middle of a long run or (even worst) at the end of a marathon knows that one thing we look to improve (other than that training thing) is our nutrition.

I take it to high levels for marathons. In fact, I go to the grocery store looking for high sodium food (hint: soup has a great supply of that). I even tried a bagel with peanut butter, bananas and pretzels. It tasted okay until the second one I tried with added salt. That was too far.

So I guess another guilty pleasure. Many runners run so they can eat. I confess at times I do (although I'm on a great health kick this summer), with a pinch of added salt. 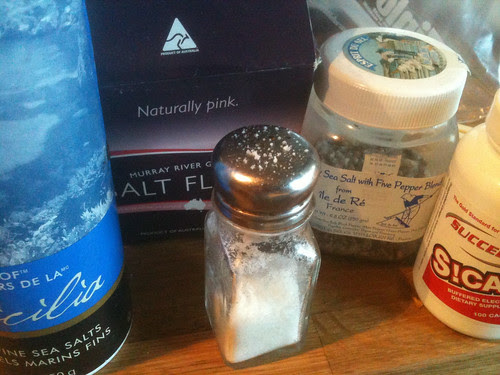 Running update: Training is going well. 11 miles today after work, 7 miles yesterday, 6 miles Sunday and my big whopper of a 20 miler on Saturday. I hit 206 miles for July!

Mmmm, salt. I try to keep it on the low-side, except the day before/of a long run or race. Then I pile it on guilt-free. :)

I stumbled across your blog on Marlene's blogroll and had to respond because I've done "the lick" too lol.