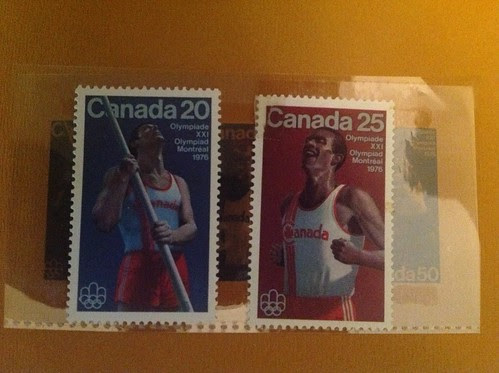 It's been 12 years since Canada sent a marathoner to the Olympics. In less than three weeks, three of our compatriots will be toeing the start line.

I dug out a stamp collection, above, from the 1976 Olympics the other day. It was in Montreal where Canada's fastest marathoner in history, Jerome Drayton, finished sixth. His fastest time (2:10:09) was logged a year earlier and he won the Boston Marathon a year later. He was in that respect our greatest modern marathoner.

Anyways, the stamp made me think about the opportunity our three guys have to make some history, but more importantly, representing a nation that clearly has embraced running in our personal lives has something to be said.

I spoke to Dylan Wykes last week for a series of articles I'm writing for the Huffington Post Canada (look for them soon).

Couple things I learned:
Oh yeah, where have I been in the last month. Maybe I should write a post on that, but the short version is a vacation from running for three weeks, and I'm ramping back up -- two marathons this fall.

As a canuck living in the US, I am excited that we have so much running talent heading to London...and that maybe, just maybe, I will glimpse a bit of them on the US tele feed! Yay!

i, for one, will be absolutely glued to the tv when the marathon is on! go boys go!!!