The mass appeal of marathoning

On Sunday, Eric Gillis, Reid Coolsaet and Dylan Wykes will be competing for Canada in the Olympic Marathon. It'll be a must-watch event not just to cheer on our first athletes to compete for Canada since 2000 in the event, but to see what actually unfolds on the streets of London (lots of turns) and if any dark horses emerge.

As I wrote earlier, I interviewed Dylan Wykes a few weeks ago. Here's a good portion of a story I wrote for HuffPost Canada today previewing the marathon and the sport of running.

DYLAN WYKES’ ROAD to London began with a fall, at the start line with 7,000 runners behind him, his knees scraped and bloodied by the slip. Some two hours and 10 minutes later, he put the finishing touches on a searing performance in Rotterdam, the second fastest ever marathon time by a Canadian and a ticket to the Olympics.

Wykes, a Kingston, Ont. native now based in Vancouver, knows he has no logical chance to medal while representing Canada among a deeply talented field that is dominated by Kenyans and Ethiopians. 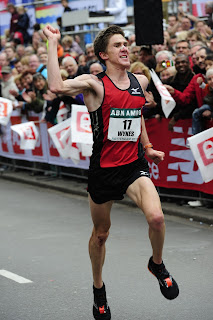 On Sunday morning, the event will get its big showcase. In these Games, perhaps more than any in the past, the marathon hits a cross road with a sport that’s experiencing a boom. Rightly so, as the marathon was an event created for the Olympics and the 26.2-mile route was forged on the streets of London more than a century ago. The Olympic marathon has historically closed the Games as one of the final events, with the winner entering a packed stadium to take their victory lap.

“It’s the biggest stage,” Wykes told HuffPost Canada as he was training at altitude in Switzerland before the Olympics. For Wykes, a top 25 performance is a goal, and a top 10 finish a dream. “There are guys who have run 2:04, there are guys who are six minutes faster [than his personal best].”
In the 16 years since Canada last sent a man to run the Olympic marathon, the sport has gone through a massive change, as a surge of popularity ushers in the next generation of runners.

A SPORT FINDS ITS LEGS

Since 1908, when Olympic organizers decided to add two kilometres to race course so that royalty could view the finish, the 42.2-kilometre marathon has become the modern everyperson’s Everest, the bucket list item that thousands upon thousands of men and women have now crossed off.
The word marathon has been synonymous with epic times, seeped into public consciousness, and applied to sedentary affairs like the airing of TV reruns, extended tennis matches or similarly drawn-out affairs, even as the marathon records continue to get faster.

In big-city marathons, where professional marathoners earn their money, the elites are joined by runners of all stripes, sizes and speeds. The biggest of them all bring in more than 45,000 runners. The most recent running boom, has seen women take on the sport (and racing) in massive, greying numbers. Last year, almost 14 million people participated in a road race in the United States, with 55 per cent of those finishers were women. Canada has experienced a similar boom, particularly in the half marathon. 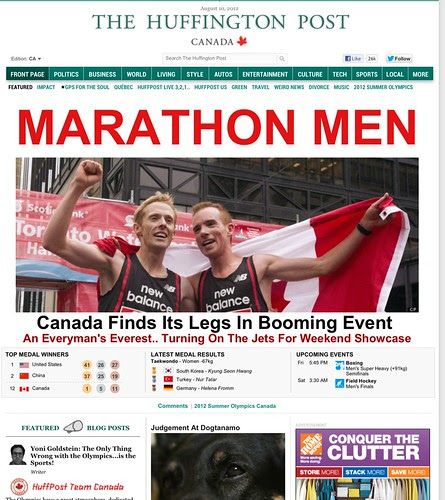