Pounding the pavement, somewhere after the 6K mark, I looked at the two runners around me and an inner smile creeped under the brim of my racing hat. Three generations of runners, running side by side by side. In the course of 40 minutes plus of racing, while many of us were running for Boston, that is a moment I'll remember.

This race wasn't in my calendar. I had signed up for the Sporting Life 10K race, which is pretty much an identical race to this one. The Canada Running Series created this race last year after the other racing body took Sporting Life. With two weeks to my first marathon of the year, I wasn't sure if 10K now would be a good idea. (Though, in my past training, the Pfitzinger-Douglas plan does call for some racing two weeks out to keep your body sharp.)

But of course for Boston, I felt I wanted to take to the streets, whatever message or solidary it'd show. Took out the Boston colours and extra bib.

I met up with a friend and we ran a slow 10K (1 hour) up to the start line. This is a downhill course, net, so we were able to warm up by going up those hills. With 10K in, I felt I'd race, but be smart in not burning out.

The start line was filled with runners sporting Boston bibs, Boston gear and blue and yellow. We had 30 seconds of silence and then it was the business of racing.

Last year, I ran the Sporting Life the week after running a marathon. I also ran up to the start line. That race I finished in 43 and change, so that was the thought, that today I could match that if not go out faster.

The first five kilometres is where you get a tonne of those downhills. We went off and I was just trying to get comfortable. Luckily, the 10K warmup meant my body was right into it -- the effort didn't feel hard, but I didn't have the fastest first kilometre (4:29). Soon, I was feeling great, and when I spotted another runner turning it on, I decided to lift the pace.


I was relaxed, shaking out my hands, rotating my shoulders, trying to get a good straight form. The splits below kind of speak for themselves. Was feeling so good that I was listening to my breathing and already starting to up the pace as runners hit the second and third uphill. I hit the 5K  mark in 21:31.

As we passed Bloor, I sort of felt that the racing could begin. The field had spread somewhat. I was noticing an older runner -- probably in his 50s -- was making some steam, so I tailed him. I was off to his right, a little behind, and we came across a young boy I'd been spotting in the distance. He was going out fast, but we were reeling him in. It struck me, as we were alongside him, that he couldn't have been much older than the 8-year-old, Martin Richard, who died earlier this week in the bombings.

There we were, a 50 year old, myself in my 30s, a boy of 8 or 9. I looked and saw the running bibs and for a few moments, enjoyed it. This is our community, all ages and abilities. We were racing.

The final 5K is a hold on to your hats. There's a slight decline, then it flattens out for the last three kilometres. We turned onto Richmond and I started to think that it was two miles to the finish. Two miles, I thought, and I thought of the last stretch of Boston. Any small thought of slowing was shaken by the thought of what happened this past week, and the fact that I had a lot left in me. Put it into the race, I thought.

My buddy Lee, who had run Boston in a blistering time, was out cheering -- I called out to him as I passed, and that gave me the boost I needed. The final two kilometres, with the sun to our back, I recruited whatever I had left. I pictured in my mind's eye Boylston, if not the street then the joy that it captures. And I poured it into the course.

And there you have it, a negative split, and the final kilometre among my fastest. I finished in 42:24, a time well off from my PB, but one I'm so proud to have earned. This is a downhill course, so every time I run it I'd put an citation that it was aided, but this one has a special mark. It was run for Boston. 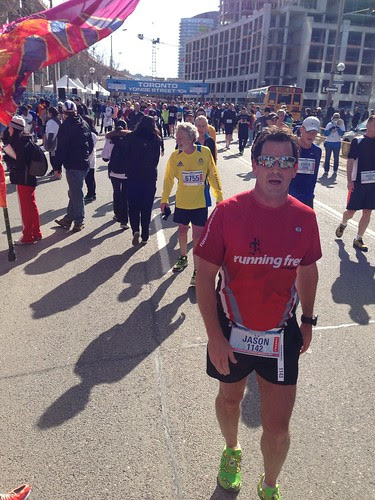 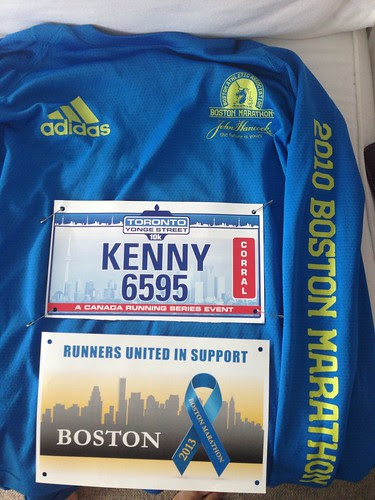 Great to see all the support for Boston. Sounds like a fun course and a fun day. Thanks for sharing.

It was a beautiful day to be out there running! Congrats to you on a great event.