Behind Sporting Life 10K's white ribbons and why we're so mad

I wish I didn't have more to say about the Sporting Life 10K. In fact, in the seven years I've run it (my first was in 2005), I've had little to say other than race reports. This year, I've recapped water issues, finish-line fiascos in my post from earlier this week. Then the race director goes and blames runners.

The response to the blog posts this week show the passion among the runners here in Toronto -- many I know, many I haven't yet met. The comments here and the conversations I'm having with runners on the streets have zeroed in on one thing. Toronto should and must have better races. I wrote with the same scrutiny about the Scotiabank bag-check issue in 2011 and it proved one thing -- we can become a great running city, but our showcase events must show why we're up to the task. We're on the tip of something -- the sport is growing, becoming more inclusive and while we aspire to make this city on par with the DCs, New Yorks and Chicagos of the world, our ambition isn't matched by what we're showing the world with our biggest events.

In the conversations I've had, similar talking points have come up. Our races must be better, not just for pride, but also for safety issues. Water stations are key to our safety, especially in long distance races. Finish-line safety is just as important. I'll let the videos in my last post speak for themselves.

One more thing. I've been contacted by Sporting Life (the sponsor, not the race director) and they'd like to form an advisory board made of up some runners. If you're interested (I'm not, I strive to be an independent voice for the community), leave a message in the comments, DM me on Twitter or email me at yumkerun@gmail.com and I'll send some of your names to them. They want it to be transparent and I hope they will be.

OKAY. So, this post is about ribbons. It's just another thing and that makes me sad.

A few of us noticed that the medals that came with the race came with this oddly white ribbon. Most races that have medals have an array of colours and branding.


Done the #SL10K for camp Oochigeas for kids with cancer! Awesome cause and fun race, check out @campooch ! twitter.com/thecraigarnold…
— Craig Arnold (@thecraigarnold) May 12, 2013

I received a few pictures taken on May 4 that explain the white ribbons for the May 12 10K race..


Take a look at the date. Yes, May 5, 2013 for Sporting Life 10K. Except it was one week early for a race run on May 12. So you can imagine what the race crew had to do -- yes, replace all the ribbons with white ones. These ones ended up in the picture below.

I got the pictures from someone who was at the Toronto Marathon expo. The Toronto Marathon was run on May 5, the Sporting Life 10K on May 12. Both were run by the same race director. You can only imagine who or how the ribbons got stamped with the wrong date.

So yes, the ordered ribbons went into bins while white versions were swapped.

The white ribbons given out on race day didn't go unnoticed. One commenter at My Next Race's review of Sporting Life 10K noted this.


Here comes my two trite and trivial gripes (but really, I love a good workout shirt and why not promote the race I just ran?). Medals had no date or year on them and came with a plain white ribbon with a Velcro thing at the top. At the very least I want to look back at the medal and say ‘oh yeah, I remember that race (from 2013)’.

Just to refresh you how ribbons on medals usually look like: 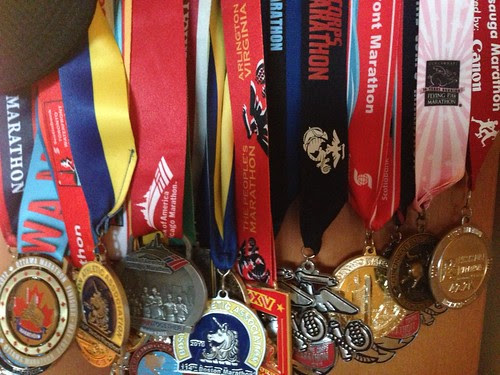 On Sporting Life 10K, yes, I'll be moving on. All of us will. We'll finish up our spring racing season to train in the summer, with fall around a few corners. But next spring will arrive and we all hope a better version of what many of us used to call the jewel of Toronto racing.

Wow. Just keeps on coming eh? I wondered why the ribbons were Velcro. No time to do sewn ribbons.

Interesting. I thought that the white ribbon was kind of odd.

This advisory board sounds like an interesting idea. Quite interested Kenny. It may improve all races in the GTA

I'm just curious, where did you find that pic of those rejected ribbons with the wrong date?

I emailed you that I'd be happy to be involved.

The 10K is an important institution because unlike a full, it is accessible to a lot of people-and it can introduce the sport to people who would never take on a full.

I'd like to see it embraced as a community event with more spectators and less hostility. And obviously we'd all like to see the problems that came up this year resolved.

Yes, there are lots of races, but there also are lots of road closing parades throughout the year and people don't seem to be as irritated by those.

Anonymous, as I said in my post, it was provided to me. It was shot on May 4.

This isn't the first time the Sporting Life medal had mistakes on it!!
Last years Sporting Life 10K ribbon had the date as "May, 13th 2012". I don't think the "," comma should go right after the word May?! Anyone else notice that?
Also on the 2010 Sporting Life medal, the front had the word 'downtown' spelled as "downtoEN".

So glad I found your post regarding the ribbons. I convinced 8 of my friends to run Sporting Life this year and it was a first for most of them. It's a good thing most of them are new runners as they didn't notice some of the awful things (finish line, baggage check, water stations) that happened. But a few did mention the tacky white ribbon. Now I have a answe for them. Thanks