Brooklyn
1-5K
The first part of the race takes you up the Verrazano Narrows Bridge -- we started on the left side, with fabulous views of the water, Manhattan. It was a slow moving mile, my slowest, but having run NYCM before, I knew that we'd be soon plunging down the other side. My target pace was an 8 minute mile and I had come somewhere around 8:40 for the first, but made up for it with a 7:20 in the second mile. 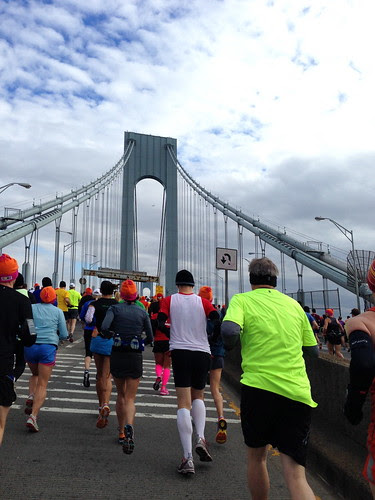 The sheer amount of runners was awesome -- it was tight in some areas but the marathon has the right idea having three routes that converge into one by mile 8. My wave was on the left side of the street, and since I typically run on the right side of the course, I was mostly trying to stay focused and working on pace management.

The weather was pretty perfect, though I dressed on the warm side, with gloves, long sleeve with a singlet underneath, and shorts. There were a few times when it got warm with the sun, but overall, I was dressed appropriately for the effort. The miles clicked by and I hit the 5K mark just slightly slower than 3:30 pace.

5K-10K
I noticed the police out in larger force this year. It started with end of the bus ride in Staten Island. Every runner was screened, but you could the police helicopters and more areas fenced off. I didn't feel unsafe. After the 5K  mark, I pushed the pace slightly, mostly keeping with the flow of the runners. The 3:30 pacers were nearby.

Since running Chicago three weeks ago, I kept my fitness up, running two other races, and pushing in a 15K race a week earlier. 3:30 felt very comfortable. I knew the course was technical with more hills so I was happy to just keep with the flow. I took a quick pee break at around 8K in, but otherwise, was feeling strong.

Then I decided to veer to the left side of the course and for the first time got to see the number of supporters on the course. It was so unbelievable, and a smile hit my face. For the first time, I really let joy take over. Quickly, that became my mantra -- "joy." Run New York with joy.

10K-15K
My second 5K help build me some buffer, but by the 10K mark, I felt I had it in me to go sub 3:30
We hit the Clinton Hill neighbourhood in Brooklyn, a narrower road that featured hills. I loved the crowds, I was running New York and the support propelled me.

My Garmin was clearly off at this point, so I was running by feel and also checking my splits at every mile. NYCM provides mile timing after mile 8 so I have the rest of my splits here:

15K-Half
We marched into Williamsburg, first passing the Hasidic community and then into the more, shall we say, lively part of the neighbourhood. My paces were consistent, I was taking in the gels and I was not tired yet.

My splits had me overall more than a minute below pace, a buffer I thought would be good to build for the second half and beyond the 20 mile mark. On to the half marathon mark, I hit it in 1:43:49 versus a target of 1:45. Things were going good, I even took a few turns wide to ham up the crowd.

Oh great, over another bridge and on to Queens. A little more quiet because of thinner crowds but also because of the Queensboro bridge that little monster of a climb. I knew what to expect and regulated my pace -- clocking a 8:16 15th mile. I took the task of just zeroing in on the runners ahead of me, and take my passing opportunities when they arose. At some point, my gloves dropped from my belt and I thought, "hell, okay, fine, i guess I'll have to run strong to keep my hands warm." The 3:30 pacer was still nearby at this point. Once we hit the top and quickly descended, we could hear the crowd in Manhattan, and 1st Ave.

1st Ave is huge, wide, and uphill. Great for spectating, and it feels like you're sort of part of this massive parade. I took a few pictures, tweeted a bit, but also realized that the work part of the marathon was fast approaching.

Bronx
Made it to 20 miles. I was glad to make it here and remember looking at my watch thinking about how long it'd take me to run 10K on a day like today. I felt it was all within reach. The Bronx is only about 1.6 miles up Willis Ave Bridge plus a few turns and corners. I was really starting to play the countdown game. I was fuelling properly, the weather was co-opearting, my legs were feeling strong. This is good. 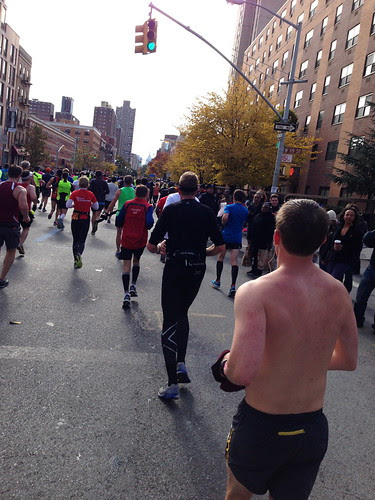 My 5K splits up to this point were consistently below or near the 25 minute mark. Entering Harlem and on to 5th, I could only think "Is Central Park near?" Of course, what I forgot was the freaking hill that is Fifth Ave. You'd think since we climbed 1st Ave that we'd have some downhill, but no. Saw Nicole on this stretch and it was passing city, as many runners were slowing. 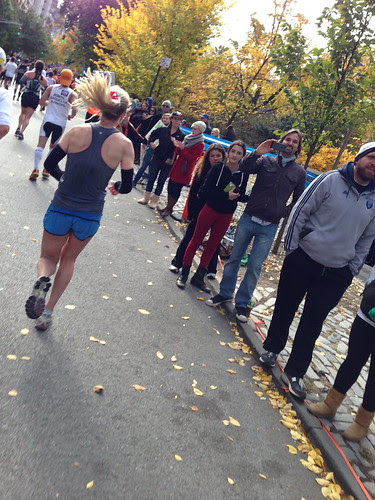 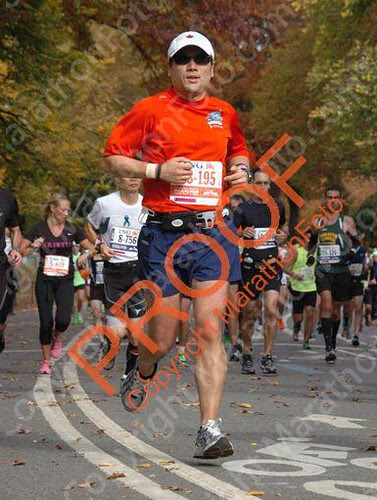 I was running well within my means so when I entered the park, I started to think about emptying the clip. The park, thankfully, had a nice downhill portion. A helicopter hovered over the park, and I realized it was a police helicopter. A show of force.

A woman with a Boston Strong sign on her back powered by me, and I thought about Boston and started to increase my pace. Ran one of my fastest miles then, right around 3:20 pace. Hitting the 25 at 7:38 we exited the park. I took that turn very wide and really hammed up the crowd, then powered back to the pack. I heard Arthur and Lisa yell "Go Kenny!" and I was at an odd point. I didn't want it to end -- it was such an awesome experience -- but I did want to make it to the finish.

We entered into the park, and I took out my phone. Captured the 26 mile mark. 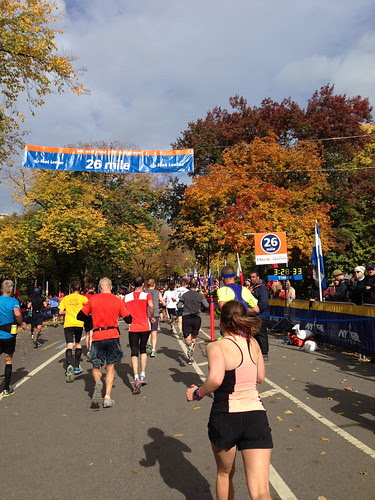 And then I took a picture of the end. 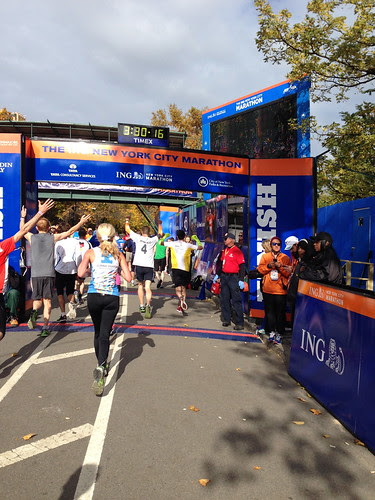 I wanted to remember what the finish looked like. I had run a strong marathon. 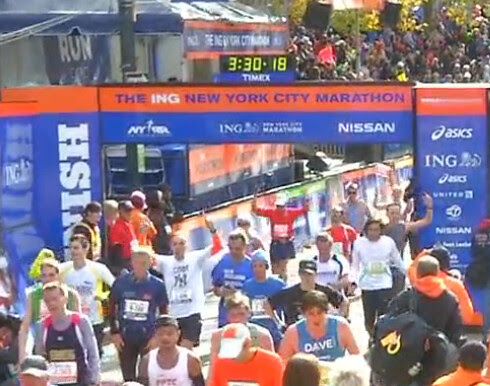 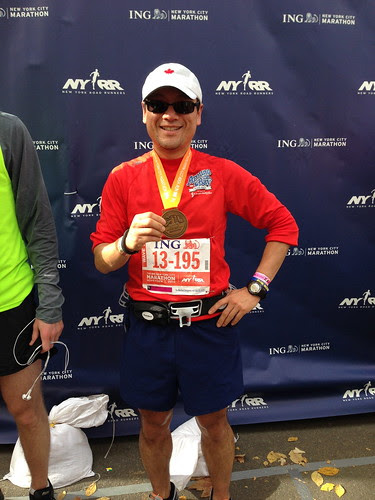 I bumped into my friend Jen who started with me and finished within 9 seconds of me, though we didn't see each other through the entire race.

The exit was a bit of a stretch but I didn't mind the walk -- and it took me more than an hour to get back to my hotel room (which was just south of Central Park). 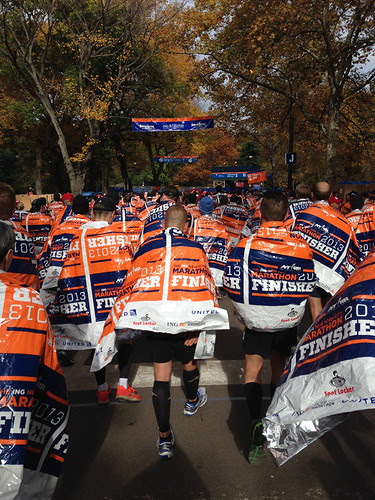 I finished in 3:27:06, about 9 minutes slower than Chicago, but I never set out to match that pace. I went into New York to run strong, not to race and it gave me a performance I'm really proud of this one. I'd say 2013 is the best year I've had since 2009. This was one of the most memorable and joyful experiences. I would do it again in a heartbeat.

Love this. All of it.
It was such an amazing experience.

This sounds like such an amazing experience. I never thought I'd want to run such a big race but after reading all the recaps and talking to friends that ran, it's hard to resist! What a great run you had...and you indeed ran with joy! Congratulations!

What a fantastic race you ran! Great race report and photos as well. Congratulations. It was fun tracking you online!

Wow, I didn't realise they were so strict on closing the corrals, but I guess they have to be with such a huge crowd, good thing you made it! Congratulations on your race!

Great report and super awesome race. You must be so excited for what's to come. The photos were just amazing! Well don't to run so quickly and get such good shots. Congrats on a wonderful year!

I love the mantra of running with joy!

I'm really enjoying your blog. I used to live in TO, so it's fun to read about my old stomping grounds. Glad that you had a great time in my new home - New York City. I was out cheering for the spectators in Queens, just after the HM point.