It may have been around the 18th kilometre sign that I knew how this race would likely end. But it was even earlier, at around the 9K mark when I passed the pace bunny, that I had an inkling today would be my day.

As a long distance runner, I've considered the half marathon as my first taste of endurance running that quickly propelled me into marathoning. My first two halfs, in 2005 in the span of a month, sparked my desire to go longer at a fast pace. Since 2007 and a time of 1:31:30, I put aside the half marathon to focus on the marathon, using them as marathon pace runs and pace bunny assignments.

But since getting a coach, I've been pretty much on autopilot. He says run, I ask how fast. So when a bunch of us Black Toe runners were signed up for Chilly, we started to ask him what we should do. "Race it," he'd say a few weeks ago as we were wrapping up our hard training sessions.

We all dread Wednesdays, members of our Black Toe group. The runs are tempo runs but more appropriately, they're intensity runs. Over the course of the past few months, we've been running loops of the Exhibition grounds or going back and forth on dark paths on the waterfront, nailing progressively faster runs, intervals that have been getting faster (4:10s, 4:05s and kilometre repeats at 3:55s or sometimes a bit faster.)

Also, the miles, I've been racking up two straight 200+ mile months, weeks of more than 100K of running. Those dreaded 16-18K tempo workouts are followed up by 15K Thursday morning runs, and Friday fartleks, Saturday recovery runs and then long runs going up to 35K. That's a lot of running.

By some point, the 4:10s started feeling manageable, almost reachable given we were hitting them in a windchilled, polar vortexed winter.

Against all of this, came the race instructions from Rejean, who sent this note a few days before the race: "You and Mike are ready to go out at 4.15/km(1:30) to 4:20/km(1:31.30) depending on the weather. Stay in that range for the first 5-10kms, feel in control, confident, and make a push to start catching people. You've been putting some great training in your workouts and long runs, so go in feeling confident and strong."

The snow came in overnight, it was -20C with windchill and though that would be an easy way to call it a day, the snowploughs and salters were out, the roads had just enough wet asphalt and slush free paths for us to say, it's race day, lets go.

1-5K
I caught up with my teammates and the four of us hit the prescribed opening pace of 4:19. It was quite a packed field of faster runners so we had to negotiate the laneways to get our pace down. The race is made up of two out and backs, which was great for seeing the front pack, also featuring two sharp turns.

Within three kilometres, we were already hitting 4:15 range, and the 1:30 pace bunny was just ahead. I was splitting the run into two halves, and also using the 15/16K marker as the point when I'd hit the home stretch.

The first check was to see how my body would deal with 4:15s and gratefully it felt great, even within the easy range of comfortably hard. Having teammates Nathan and Mike nearby made it for easier pacing, as the three of us do tempos and long runs together. In past weeks, Mike and I have been figuring out our paces, helping each other hold back if we went out too fast, or hold on for dear life at the end of tough intervals. By the fifth kilometre we were hitting our pace.


We were out on the way to the next out/back, and time to get the work on. A few oddities. First, the cups were a clear plastic that if you squeezed to form a funnel, would crack. Which means I barely drank a drop of water through the race. Second was one of the two gels I carried was tucked into my tights, which by kilometre 4 had made its way down my tights to settle at my ankle where it spent the rest of the race.

We caught up to the 1:30 pacer around the 8/9Kmark -- I think -- which was quite a moment for me, as it made it more real that maybe I could go sub 1:30 today. As I was passing, I was doing a breath check and it was feeling good. Scary good. It was all solid splits, just getting comfortable.

More running, not really sure what I'd feel like by the half mark, and when I hit it it felt fine, so I kept up the pace with Mike right with me. Through the second half of the race, I was constantly gauging my feeling compared with my tempo runs and I always concluded that "it didn't hurt as much." So I pushed.

Some of my splits were getting faster than 4:15s, and I knew I was making time on the 1:30 pacer. The faster I could go, the buffer on 1:30 was even greater. Another runner asked Mike and I what we were doing as we hit the final 5K and I said "oh, you know, something like 4:14s" and she told us she'd run with us. So she joined our group. The final bit of the race featured a bunch of small rollers. My feet were soaked by then, I had no second gel (I took my first at 10K) but the weather was now in our favour.

I spotted a 4:19 split at the 17th kilometre and resolved to fix that, upping the pace again.

With three K left, I knew I could nail the race. With two K left, I wondered when I could find the after burners. It was feeling good, too good, and I was thinking of our team workouts, looking forward to running past my coach and teammates and found another gear, hitting the last kilometre in 3:57, my fastest, followed by a nice little sprint.


As I was reaching the finish line, pumping my arms for my team, hearing the announcer butcher my name, I saw the clock and the number 1:29:xx with plenty of room.

And that is how you break a seven year personal best. Train hard, work hard, race hard. 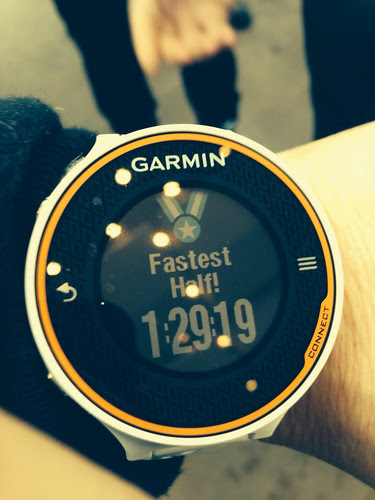 Congrats on the pb. Great result!

Congrats Kenny on such a great result. Nice to see all that hard work is paying off. It was great to see that the roads had cleared off some for the race as well as it wasn't looking too good first thing. Congrats...

And I love that the Garmin even showed a little medal for a new Personal Best!

excellent race. way to put in the work there Kenny. And nice watch!