Most of you dreaded this winter. Not me. I had my own tormentor.

Because regarding winter, I had no excuses. When I committed to train for a strong May marathon, I knew I'd be putting myself in uncomfortable territory. While I am a year-long runner, I typically focus on fall marathons for peak performances. But that's not what I wanted out of this year. If I were to hit May, then I'd have to train hard during this winter. You all know well the story of this winter. Some 35 extreme weather days, windchills we've never seen in many years and snow -- lots of it that made our footing iffy.


Was it winter that struck fear into me? Not really. I feared Wednesdays.

I remember one Wednesday about 14 weeks ago, I had signed up for the BlackToe team and our first quality workout was 8x1000. We couldn't do the Ex because it was an icy mess, so we moved to the waterfront trail. It was dark, slippery and we started to hammer those tempo paces. Back then, we were trying for 4:20s.

The Spring RunOff was what kicked of my adult racing habit. Back in 2005, when it was sponsored by PowerBar, I ran my very first road race. I was hooked, on racing, on pushing myself and on this hard course. I've since run it most years (and a few times done what I call The Double) no matter what my fitness or what I'm training for. My PB was set in 2008 when I was training for the Cincinnati Flying Pig Marathon and using the Pfitzinger-Douglas training program. That mark, 33:57, has stood for so many years.

This year, we took winter on. We ran right into the -15C, hammering out intervals, tempo runs and MP Wednesdays. Our tempo sessions were universally dreaded. We'd get a cryptic line in our training program, something like "3km warm up. 4km, 3, 2,1, start @ T" and we shuddered. My pace group members would all show up nervously and we'd go out to 'work'. But teamwork prevailed, and we always ended up the day laughing, stronger, more confident. Then on Thursday, I'd go back out there, sometimes running 15K some 9 hours after doing a 17K tempo session.

The paces got faster. What was 4:20s would become 4:15s (It was our fault, coach would say, as we'd do the intervals too fast). By the time March became April, he had us going at 4:05s for tempo (one hour race pace.). On the way to my new half and 30K PBs, our paces continued to drop. We'd start tempo sessions doing 3:55s and realize we were going too fast. We hated Wednesdays, but Wednesdays made us better.

THE RACE
I asked the coach for a race plan, telling him my legs were still a little banged up from Around the Bay. I told him my PB was 4:15 pace and that it was soft. He advised me to be careful on the hills and hammer it home from 5-7.5K.

The day was windy, gusting up to 55-60K, and it was a chilly 1C before windchill. I arrived at the site an hour before race start and checked in my bag. I waited for a few minutes, then started a warmup jog, trying to hit around 5K at a recovery pace. That helped me warm up and I realized how beneficial it is to run before a short race. You're not going to hit a wall with 8K and I'd rather have my legs (and heart) ready to go).

I met up with teammate Mike and we lined up in the front corral. We made loose plans to run together, maybe go for 4:10s.

1K-2K
Mike and I blasted out, aided a little by the wind that would later push against us. The first K pushes south into the park, then curves. A few runners were creating some traffic jams but we cleared it and I saw us running 3:55s so we backed off a bit. I had dressed the same as last week's run -- I figured the actual wind would be a factor, so I went with a singlet, base layer and team singlet on top, gloves, touque and tights. The field quickly spread and by the 1K mark, we had hit a 3:58. It felt comfortably hard and I wanted to see what I could do without losing too much pace.

At the mile mark, the course plunges downhill. I saw coach Lyndsay there and she gave a good cheer -- I let gravity to the job and coasted as much, hitting the flat side of the course with pace. Hit the 2K mark in 4:05.

"Time to race," I told Mike, as he had pulled alongside me.

3K-4K
The 3K mark has us rising Centre Road, which is the first of two big uphills. Yes, it hurt and it's a long climb. I had lost Mike at this point, but I was picturing the hills of Burlington and running it strong. I was warned not to burn out on this hill, so I regulated the pace a bit. I saw coach Rejean at the top of the hill and he shouted out encouragement, something about leg turnover and being smooth. The 3K mark is halfway up the hill and I hit it in 4:21.

Finishing the hill, the next portion flattens out and it was here where I knew the race started. We passed the start line and headed to the water station. Big crowds were out and I was trying to let my heart settle from Centre Road. I took a Gatorade just to wet my mouth and by then, there were only a few of us (Stan, as it turns out, was around me). Hit the 4K mark in 4:21 and had a 4K split in 16:29, which averages to 4:07.)

5K-6K
The next kilometre was net downhill, nice coasters, and by then, the field was so spread I didn't have many runners to pace with. I had seen each of the other splits (4:21, 4:14) and knew I wanted to start to work. Coach said 5.5 would be a place to race, but I knew I could push it up again. This section has nice turns and the wind, while blowing, was not hitting our pace. Hit the 5K mark in 3:58.

The next kilometre sees a massive plunge, followed by a few rollers that can easily suck the wind from you. I really focused on pushing, heeding the call to race. I hit the 5K mark starting to think of all the Wednesday training sessions and paces.

The hurt you feel during quality sessions is one you remember -- feeling the same pace in races can defeat you, but knowing you can survive them is the ultimate confidence booster. I pushed and hit the 6K mark in 3:52, my fastest kilometre so far.

7K-8K
Two more kilometres, I thought, wishing I could turn the 2K into a mile just by thinking of it. No such luck, so I just pictured the turnover and effort I had put into use at the end of hard workouts. The twists, curves and small elevation changes. I had a few other runners to pace off of, so it made it a bit easier. Hit 7K in 4:07. My legs were hating me, I don't think they forgot ATB.

The final kilometre of course features the huge Spring Road Hill. I also got a look at the clock at the bottom of it. I knew that there would be a lot of people up the hill, including friends of mine and one of my coaches. Did I want to walk? To be honest, yes. But I knew I had good time on my PB and at the end of all of this, the way I felt was no worse or better than any given Wednesday. 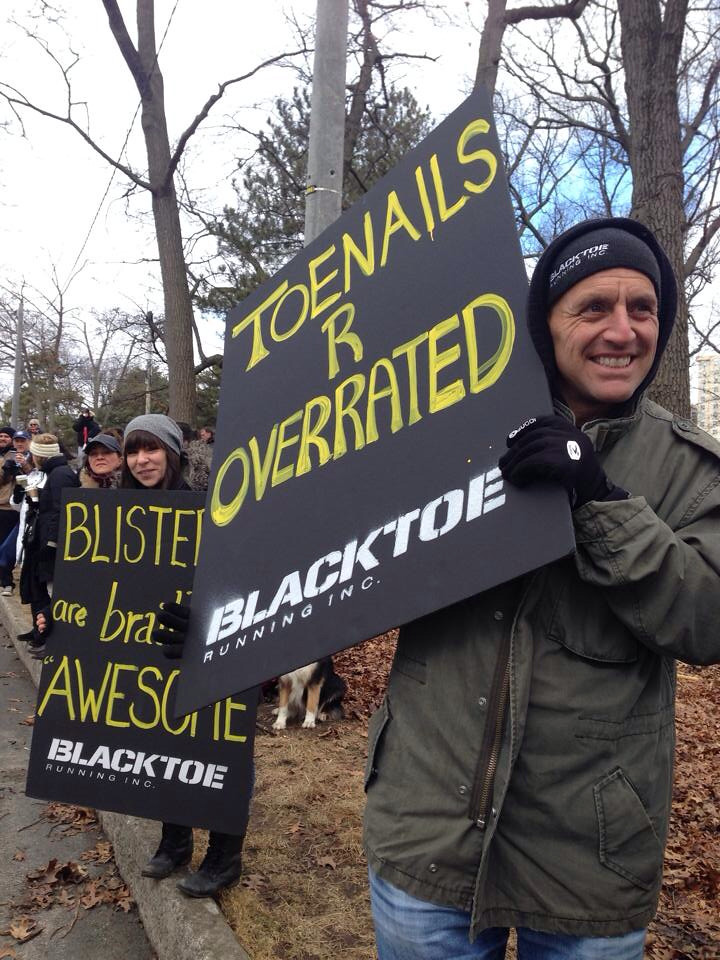 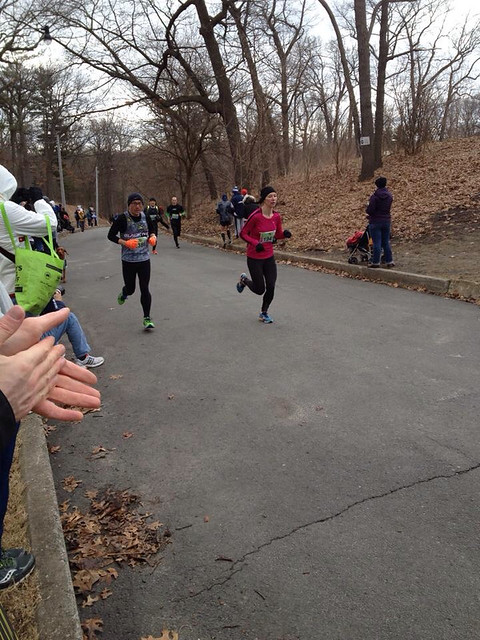 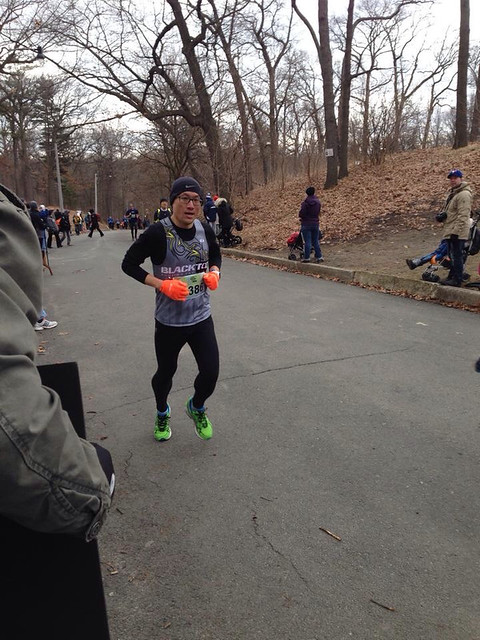 Painful, it was, but fun to see where my fitness had taken me, this past 14 weeks, past two other PBs that were six years old, past a vortexed winter, and past 14 Wednesdays. I saw a few of my teammates, a few friends and traded a huge high five with one of my coaches, turned the corner. Hit the final kilometre in 4:28 pace and saw the 32:xx on the clock, heard my name and I knew I had it.

Race No. 4 is the real deal. Winter is gone, spring is coming, and only four more Wednesdays, a day that I hope now dreads me.

This is so awesome. Congrats to you. Loved reading this race report.

great race report Kenny! I see that I made a guest appearance on your 4 km pic :)

Great job all winter and yesterday and thanks for finding me on the big hill!

You're on fire Kenny! Surviving the winter vortex has turned you into a machine!!

Great race report and amazing race! No holding you back! You're doing amazing!

"Did I want to walk? Yes", haha that is so true! Felt the same way, and in a lot of ways I felt like I was walking :P

Very good run! Thanks for setting the pace at the start. Just finished my race recap and mentioned how I lost you on the first hill. I'll be getting hill fit for the next time we race together ;)

Congrats on another pb!