The course itself is a big 20K loop, with 5K or 10K spurs (or mini loops) to help complete some of the distances. For your reference, here is the map. My race, the 25K, was supposed to be a 5K spur, followed by a full 20K loop. 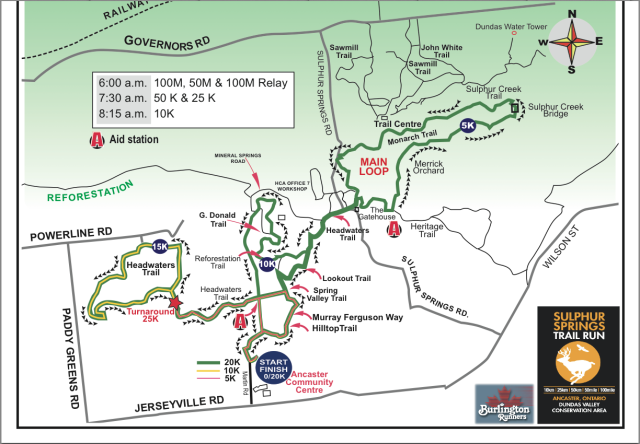 Met up with Mandy, who drove Alex and I down to the race site. Mandy's dog Sam, the most adorable pup, was also there.

I started the race going easy, but once I saw the footing was good and that the new trail shoes felt good to go, I started to increase the pace and let the initial downhill dictate the space. Over the next few kilometres, I made a lot of ground and started to find my stride. The first part of the race had downhills made up of hard packed trails, grass or gravel, which turned out to be most of the race, save for a portion that was run on road at which point the road runner in me made a little ground for the 50  metres we were on pavement.

What was stunning to me about the run was the scenery that was breathtaking at parts. The green, the flowers that were out and just Spring in general was just a sight to see. But the reality of focusing on the trail also meant that I had to keep my eye on the ground.

Last weekend, I went on a trail run with Mike, who is experienced on trails. During an hour-long run through High Park trails, I watched carefully as he navigated so smoothly through tight turns, narrow paths, elevation drops and little climbs. Us runners over time develop a sort of dance, which I compare to lightness of feet. As a road runner, I have my little tricks -- stutter steps, sideway moves or a little burst of cadence to jockey left or right. Watching Mike -- and today watching other experienced trail runners -- reminded me that there is a dance to trail running. Luckily, I could bring my own dexterity to play. 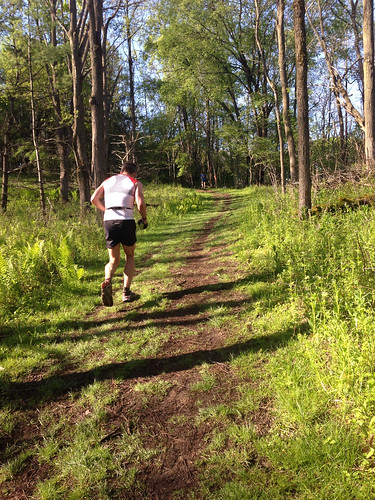 It was clear sometime after the 3K mark that we were probably off track. I was simply following the runners ahead of me and though we were informed that we would be told when to turn to complete the 5K spur, I never saw any course marshall. That kind of threw me off for a bit, as I wasn't sure if I'd end up doing 30K.


The course itself had decent elevation so that there were challenging climbs. Some of them, like that final hill, I walked partway up. Not knowing how I would fare for the whole race, I did not attack the course as much as I could have. I kept on reminding myself to keep my breathing steady, to save energy on the uphills so I can run stronger on the flats and hard on the downhills.

At some point after our diversion, we came across the 10K runners, which was an interesting case for me because for some reason it made me run a little faster. Entering downhill portions, finding passing lanes was a lot of fun, as was zig zagging around trails and blasting through mud.

Yes, there was mud. Lots of it, though the course was overall pretty dry. I was advised by others that I was going to get wet anyways, so no need to get antsy around mud. My strategy then was just to blast through some muddy sections while others found inelegant routes around the muck. All is to say is that I had a tonne of fun running through it all. Wearing compression socks was a good idea in a way as mud flew up my leg.

Through some downhill and more technical trail sections, I realized that I could turn my road dance into a trail dance, that my high cadence I'm known for in a way transfers pretty well to the trail. Sure, I was a bit more clumsy than trail experts, but I was holding my own.

In a weird way, I felt right at home -- this was running. Running in trails was for me -- like Mike described to me -- not unlike navigating a video game, thinking three to 10 moves ahead of you, gauging the elevation, another runner and the many paths you could take.

LOVED it. I can't tell you how much all of that -- interesting, lower impact trails, along with the challenging terrain, was exactly what this road racer wanted. Road racing and the pace running I am accustomed to looks for consistency. I compare that type of running to metronome in pace, consistent in effort and increasing tempo as you redline.

Trail running as I did today used some of the same concepts, but with huge twists that made it so interesting for me. 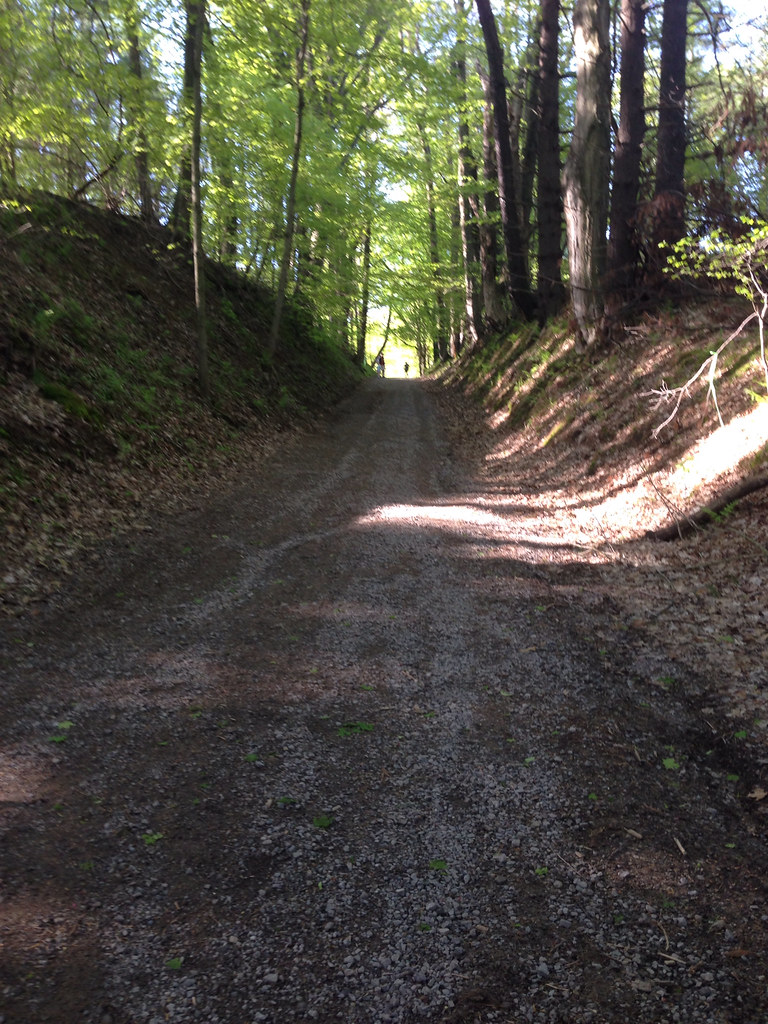 The final bit of the course saw us hit the finish line with another '5K' or so to go, so the course marshalls sent us out to do another few out and backs. I got to talking to a few other runners and I asked a lot of questions about the course. I never betrayed that it was my first time. Funny thing was, three weeks out from my personal-best marathon, that I had dragged a good portion of my fitness with me. It served me well today. When I was tackling a hill, or increasing my pace down a downhill, I would remind myself that I had legs, had training, had a winter of fitness. And that helped.

But I also had moments. Moments that I took out my phone to take some pictures to share. Moments to stop and just look at what was around me. That doesn't happen to me often at road races, especially not this year. And that was a refreshing change. I was reminded of why I do run. Even when running hard, I would describe my mood as joyful. 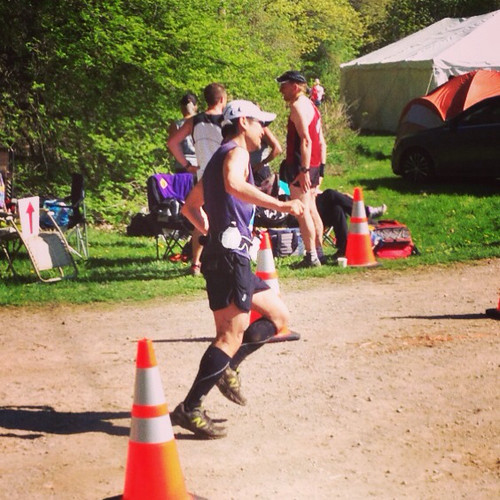 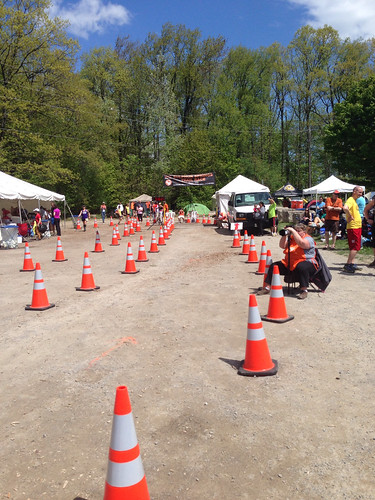 The final hill, I power walked half way, then ran the rest. I waved at some friends, turned the corner and finished my 98th road race. I finished in 27th place (kind of mind blowing, but I have a feeling some of us ran a difference course than the rest) out of 261. Results here

The trail community is pretty spectacular. Everyone's welcoming. I met a bunch of runners I know from Twitter and they were so great to chat running with. Everyone asked me if I'd do another trail race and the answer immediately was YES.

Yes, this was a race like no other. My first trail race, and if I have my way, far from my last. 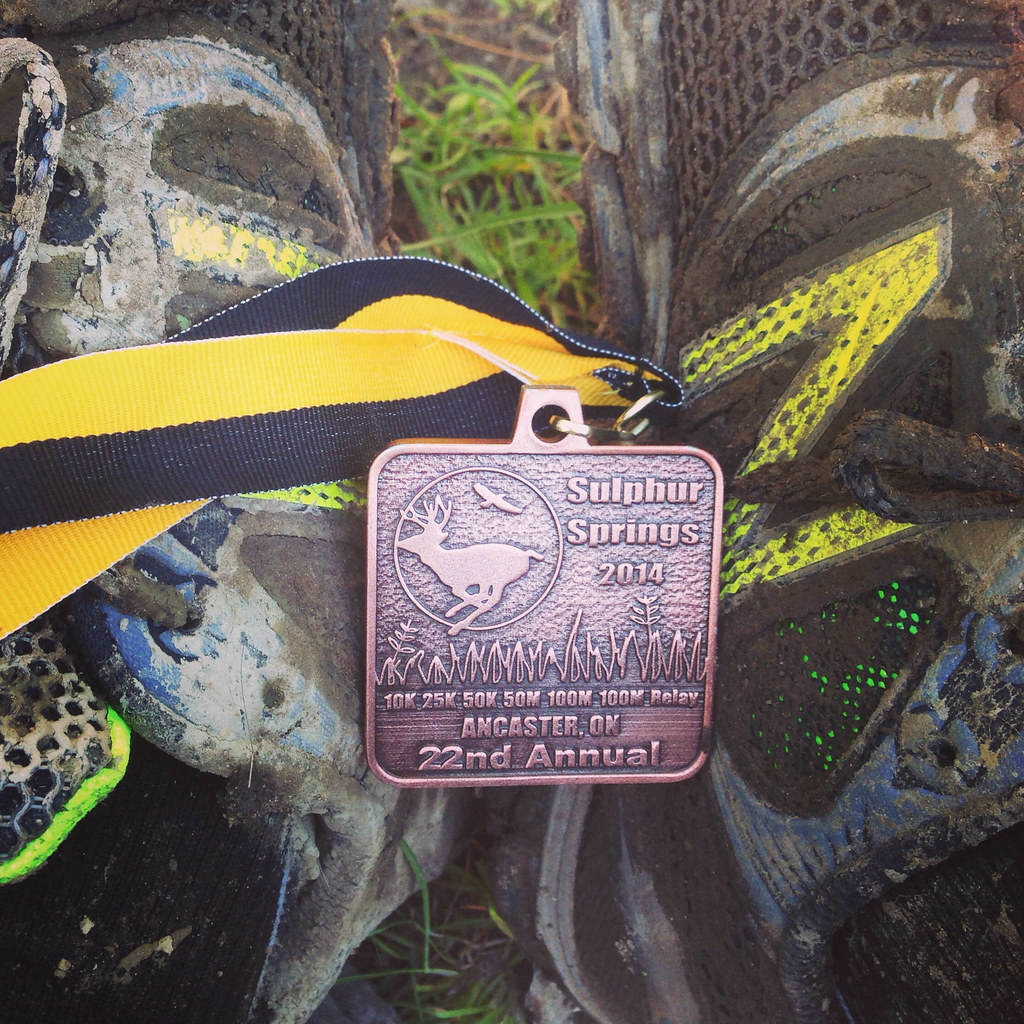 Some lovely lines in here, Kenny. Glad to hear it was such a success.

Congratulations Kenny. Glad you had such a great experience in your first trail race. There's something very calming and exciting about the trails that's for sure. Sulphur is a beautiful course and mostly not too technical so a nice place to "get your feet wet". Well done.

Congrats on a great first trail race! I love trails because they remind me of how much flat out FUN you can have running - you can't be a slave to your watch because it's probably lying to you anyway, the atmosphere is relaxed, and let's face it, bombing down the side of a hill in the forest is just awesome.

Glad you had such a good time - it's a whole new world of races to explore now :)

great report kenny! i hope to check out sulphur springs next year!

I'm not sure how you guys went off course because the route that I ran yesterday was the same as what I ran last year? Weird. Maybe there wasn't anyone at the 5K spur turnaround or something? Regardless, I'm so happy that you enjoyed yourself out there and totally not surprised at how well you did. Hope to see you at another trail race someday! Great work!

Congrats on a solid result. Sounds like a great place to run.

When I saw your placement, my first thought was "of course" Of course you would do so well. You're a fantastic runner. When we saw you at the cars, it was amazing to see how much you LOVED it. Great report and happy to read there will be others. See you at Rattlesnake and the Toad, I hope