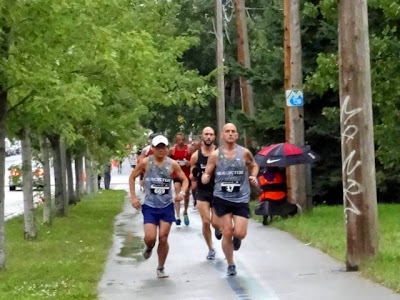 6-12k
We got into Unwin and headed toward Leslie Spit where we would do a loop. For me, this would be the first huge test of the day. How would running into a strong headwind hit me. Were my legs not ready for a long effort after Wednesday. Could my cardio handle it. Mike and I were running alongside, barely talking as we usually do, occasionally calling each of our kilometer splits. The push into the wind was tough, and I reminded myself of the effort it took during my spring marathon, where I ran a good portion into strong winds to a BQ. We were joined by a third runner who was right behind us, which in retrospect helped us push the pace. We took a gel, then the other runner took the lead, maybe because he wanted to share the load.

This is the part that is scary, but good scary. We were nailing 4:20s. Split after split, even with hills, wind, winding roads, we were hitting 4:20s, 4:19s, 4:21s. The three of us joined another pack of around 6 runners, merging, losing some in the process. The effort was increasing and you could hear it in our breaths but the turnaround was coming. We spotted three team mates on their way back from the lighthouse roundabout, and it boosted our spirits. We rounded the tip of the spit and back onto the course. The game was on

13-16k
With the wind at our back, and now seeing runners on the way back, our pace started to increase. A few times, we chatted about easing a tad, or as I put it, "let's save some gas for the end." Saw lots of runner friends, including the 15k folk who were now on the course. The fast rolling clouds had now swept through, and the winds were lessening. As we exited the park, I felt good. Crazy good. 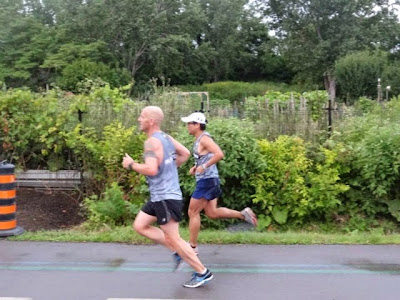 17-23
The next part of part of the race visits Ashbridges Bay though Leslie St and Lakeshore, stretches of road and I felt at this point like it was go time. It was just past the half and I was starting the whole assessment thing again. How were my legs, cadence, soreness, cardio? It all felt smooth, that rare feeling when you're running at a fast pace and actually felt that you could either go on for awhile or put on an extra gear. Mike and I were trying not to go out too fast, though. We entered into the Bay and with it the series of winding road, wood chipped trail and boardwalk. Saw a few of our up teammates again on the out and back portions.  It really looked like everyone was having a great day. We hit the half marathon mark in 1:30:07, a real solid pace. The 20k mark was already a huge marker for me, and by then, other than a slightly complaining tummy that I could keep at bay, I felt I could handle the rest of the race. 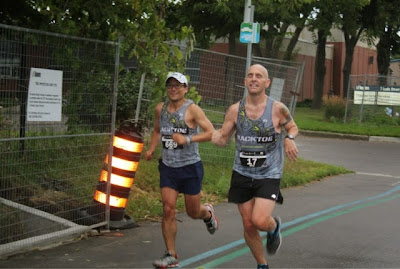 24-28k
I compared how I felt at this point, more than 24k in, to how I felt in the first few kilometers of a tempo run, where I'm doing them in 4:10 to 4:15. I could do the  rest of the race at tempo, was the overwhelming thought. We did a 4:25 on the stretch on Lakeshore and I quickly tried to adjust the next split back on pace. Mike by then was on my shoulder instead of beside me, so I tried to speed up to give him a chance to surge back with me, but he ended up still behind. At some point , I decided to just continue at the pace and heed coach's advice to close the race fast.
There were only a few 30k runners ahead of me by then but we also merged with the 15k runners by this point. So what was 4:20s became 4:15. I ran on the other side of the pylons as I swept through the course, picking up a few 30k runners who gave chase but ultimately did this alone. It was a really good feeling for three kilometers, as if I was refinding my stride. I thought of the marathon and how I felt at 37k and said to myself that 26k in is nothing. Don't get me wrong, it was an effort, I was running hard, but I had room. Plenty as it turns out.

Finish
Get me to the mile mark, I told myself, playing mental games. I could close it within a mile. By 2k, the finish felt 2 miles away but I continued to hammer. I ignored the 15k runners as I ran up Cherry and across Commissioners. I knew I couldn't reliably pace myself with them so I just focused on my own form. It occured to me during this spell that I had no clue what a 4:20 pace would end up. I had no time to do the research but I had a feeling that it was a 2:10. Months ago, I looked at a sub 2:10 30k as a near impossibility. Today, I looked at the total time with two kilometers to go. The number looked sweet. 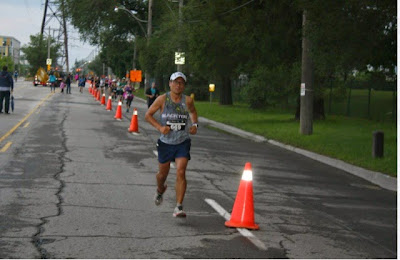 Closed the 29th kilometer at 4:03. I had enough gas to continue at that pace. So I just threw away pace plans. Now was the time to buy myself some seconds. Saw friends, teammates as I rounded the last corner. So pumped. I had just run a marathon three days earlier and now I was on my way to a PB, most likely a sub 2:10. Passed the finish line with my fastest kilometer of 4:01, and saw the time. 2:08:49.

Wow. No words. The feeling was more, okay done, mission accomplished. Amazing night. I have no regrets running a marathon on Wednesday. I have no thoughts really about what would had happened if I had actually done a mini taper. The result is stunning but logical. It says that the training, the miles, the streak, the intensity and the experience - my 13th 30k race - would bring me a performance that I had always dreamed of. This was my first race as a masters. I'm feeling I'm only starting to see what I'm capable of. And that's pretty freaking cool.
Posted by yumke at 10:58 AM

Awesome night all around! Congrats on the PB.

Holy YES. Breakthrough around the corner much?

Great training results in awesome performance, congratulations on both!

What a great race an fantastic report Kenny. Awesome year you are having. Nice work.

Congrats on your PB! You AND Mike zipped right by me at the end and I only did the 15, lol.