"You're here early," the race volunteer said to us as we piled out of a car more than two and a half hours before a few thousand other runners toed the line at the Zoo Run 10K.

"Really," we said, laughing, mostly at ourselves. We weren't laughing a week earlier.

Racing a 10K four weeks out from the marathon wasn't out of the ordinary. What coach wanted us to do with the run was another matter. The original plan was for us to do the 10K at marathon pace, with the last two Ks hard. Which sounded like a promising idea, targetting 4:20s or so.

But we had also entered the race for the 10K "club championships", sponsored by Black Toe, and I was one of the five guys on the men's team. Coach issued the new instructions a week before. We would RACE the 10K, but we'd have to warm up for 15K before the 8:15 am race start. Then warm down -- up to 30K on the day.

Which is why, at 6 a.m., my Black Toe teammates and I were in the dark, trying to find a route around the zoo. By the time we surveyed the parking lot, we thought it'd be better to do laps of the 1K parking lot, which lead a 1:20 15K, run at 5:03ish pace.


It was a light run, almost went by fast as we lapped the lot while the cars carrying 3500 runners started to arrive.

Having almost an hour after the warmup to the race, we changed clothes, fuelled up and tried to calmly prepare for the race at hand. The pre-race warmup was a lot of fun, us seeing all the elites including Lanni Marchant, Rachel Hannah and Eric Gillis. Great star sightings for us running nerds.

We had a few teams entered into the
The Race: A technical one. Hilly. A lot of turns and, as this year's women's winner Rachel said, "the race is like cross country running on the road." I last ran this race back in 2007 and had to read that race report to remember anything about the race.


First 5K
I ran out with Mike and Andrew, and we successfully fought the vacuum. I won't bother describing the course (the map below) but suffice it to say, it had, in the first kilometre, six turns, a decline, followed by a hairpin turn, then a long incline up the hill we descended. The course is a lot of fun for watching the elites as it turns on itself at multiple times.

We were working hard, and I was trying to do some pace management into the hills. The sub 4s were not technically hard, as we are able to nail multiple ones in weekly training sessions, but I could feel the course taking a bit of the momentum away.

We were blasting the course, though, feeling good, keeping pace with the strong runners as the field of recreational runners was pretty well stacked. In the first 5K, we were able to maintain pretty much on plan, if not a few seconds faster on some splits. Hit the first 5K in around 19:24, which on its own is a pretty sweet time.

Second 5K
The course in the zoo is a winding, hilly and not the greatest for a guy who trains mostly in flat land. I was able to keep the pace but was feeling a little more winded than I'd like. I hit the 6th kilometre in 3:52, then the seventh in 3:58, both showing promise that I could nail a pretty fast race.

Not sure what it was, with two miles to go, I wasn't feeling like I had the drive, but I tried to keep up the pace, hitting the eighth in 4:04, a little slower. Usually late in races, especially marathons, I try to picture myself covering the distance left and use that mental technique to keep me calm. That it wasn't that long to go. But I kept on wishing for the end and it wasn't coming any sooner.

In short, somewhere in the final kilometre, I felt close to redline and for no particular reason, I slowed to a short walk break. Yes, a walk break. Weird, but my head wasn't in it today. I picked it up after counting to 10, and was able to keep it up but then hit another patch when I thought I didn't want to redline. This is something I NEVER ever do in training, in intervals or tempos, so it was a little out of character. In a lot of ways, I think my head really wasn't in it by the end, even if my body could have done it.

So that last kilometre ended up being a slow one -- one where the wheels came off and all those solid sub-4 min kilometres came back. I'm almost glad I didn't go sub-40 on this race -- I simply hadn't earned it.

The things I do know is that on a fresher pair of legs, maybe one that hadn't run 15K the same morning, would have had a stronger last kilometre. I know that there is a 10K course out for me to show the fitness. I know that I'm on track for my marathon. And I know that every hard raced run that doesn't meet your expectations are just another carrot for the next time you go tackle that distance.

Best part was seeing all the clubs coming out for the 10K club championships (results). Our men's team came in first and the Beaches Runners came top overall. The SPR Angels, with two of our coaches racing, won the women's race. Fantastic to see all the crews out. Running is strong in Toronto 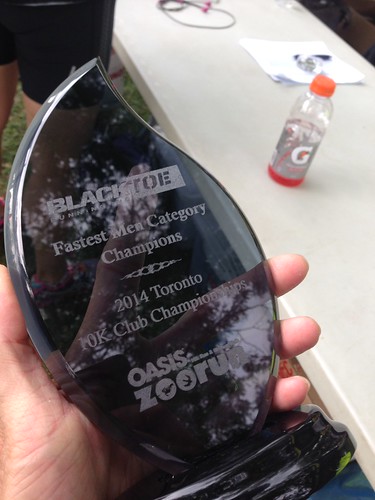 Nice race. I'm sure you could have been sub 40 if not for the 15k before. I get you with the redlining thing, a lot of those hills force you into that zone and you're also either running up a hill or trying to recover from one you just run up of.

Congrats on a great result on tired legs especially!