Fear Is The Greatest Motivator - So Be Fearless

I was ready to give up on my goal. A pulled calf a few weeks ago, just as I was about to go into my taper, reminded me how much humility I need to bring to my training. It gave me perspective on what running is to me -- that while I want to run fast, I want to run long, and for a long time.

In the past few weeks, I've been making plans for another marathon past Scotiabank, going back and forth on whether I'll truly race this goal marathon I've been building up to all summer.

Was I finding a way to opt out? What was I afraid of? Today I think I found the answer, and it surprised me.

I have some unfinished business. My coach thinks I'm fit and ready to go. The game face is back and it is good.

And I'm not alone.

How do you measure success? It's a question I often ask when I'm interviewing potential candidates in my day job, knowing there is no right answer. For me, the answer to that question helps me judge character more so than to let someone talk about how great they inevitably are.

Success in the corporate environment takes different forms. Meeting targets, heading a project, doing something that you'd tell at the dinner table or ultimately put in your resume. What one sees as success often tells a lot about them. The answers speak show one's self confidence, self awareness and how they strive for greatness in the wake of the always-present risk of failure.

I've thought a lot about failure and fear ever since one of my first work mentors taught me a phrase that shook me so much so that I printed out it, and stuck it to the side of my desk. It became one of my first guiding principles that reminded me that to be extraordinary, you had to find motivation. And I found one source of it.

"Fear is a great motivator," he told me.

Fear, and fear of failure, is a powerful thing. It can act as a deterrent to taking risks. Or it can motivate you to take the elements of fear -- self doubt, dread, apprehension, limitations -- and propel you into effort, effort that will help you find courage, calm, confidence and -- if you're lucky -- success.

The Scotiabank Marathon is a race I've run for nine straight years. It sparked within me the desire to become a marathoner. It's where I realized I could go faster, aim higher. It's where I first tried to qualify for Boston and where I learned what "respecting the distance" meant.

Scotia was also the same course where two years ago I ran the most emotional marathon of my life, my slowest race, my lowest point. I did that race to run towards a temporary refuge, but couldn't escape a conclusion I knew was inevitable. On race day next Sunday, it'll be two years, almost to the day, of when I lost my mother. So much of my path back was fuelled by that day. I've written a lot about how running nurtures my soul, how I use it to run away from the stresses, to run toward solutions, to free the mind and reconnect with my body and senses.

Today I want to talk about fear, risk and goals.

Marathon runners are goal setters -- we have to be. Whether we're a first time marathoner or going for faster times and pushing our limits, we commit to a process that is unlike most other sporting pursuits. Weekly mileage, quality training, strength routines are all markers that get us to the goal.

The goal - for most of us - is to run, run farther than the fuel your topped off fuel tanks can propel you. The goal is to get to your limit -- the wall, or whatever mental or physical obstacle that presents itself along your 42.2K journey -- and push past it toward a finish.

Setting a goal is often the scariest part of the process. Once I embraced a program that saw me peaking at 112K a week as I read the program on the subway on the way to my 11-hour-a-day job, my hands were trembling by the sight of the mileage, the hard workouts, the hours and days I would have to spend not only on the roads, but on the roads with pace.

Years ago, with so much as a book as a coach and my iPod as my running partner, I embarked on a goal setting path to get to Boston. What I will ultimately tell you is that I got to Boston, but the narrative was formed with 4 am tempo runs, weekend 32K solo efforts in high humidity, day in, day out. I feared many runs, only seeing that fear subside with each run that I survived, a big check mark applied to the calendar.

And on race day, if all comes along and you go -- as some say -- balls out, you can create something just short as a work of genius.

Gambles don't always pay off though -- I wrote recently that a marathon race plan is to "run with your head, then with your heart, but within your ability." Even with all of that, anything can happen when the wall arrives.

In conversations with many runners the past few weeks I have regained the spark -- if fear is to ignite my best, then I've got plenty of fuel and kindling to last me through to the start line.

Success, and the fear of what you have to do to achieve it, means most runners are hesitant to share goals, but this I know:
Most people I know are quiet about their goals. They hold them close to their chest, cards only known to them or to those who pay attention to training plans.

I'm not alone. All the things that I think I'm going through, every one else is going through the same thing.

If I can imagine what the overwhelming emotions that will be at the start line of the Scotiabank marathon, it will be a combination of fear and confidence, of dread and calm, of excitement and of purpose. And I'm coming to the conclusion that my own fears should be embraced and that I can use it like I've always had. Use it to fuel my ambition. Use it to run hard.

Just as I was about to publish this piece, I came across a story written by Rob Watson and his admiration for Steve Jones, a marathoner who was tough enough to push, particularly at the 1985 Chicago Marathon.

Jones’ 1985 Chicago Marathon run reveals that there is no secret, no luck involved. You just have to work your ass off and, come race day, you have to be brave and you have to be fearless


"You don't become a runner by winning a morning workout," John L. Parker wrote in the novel Once A Runner "The only true way is to marshal the ferocity of your ambition over the course of many days, weeks, months, and (if you could finally come to accept it) years. The Trial of Miles; Miles of Trials." 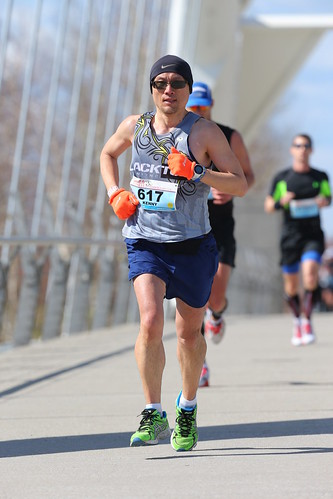 The words "ferocity of your ambition" struck me more than anything in the above quote. It speaks of the quiet fierceness that us marathoners build over time -- through the hours, days and years it takes to shape a distance runner. That ferocity, I believe, may be quiet on most days but expressed on race day as an all out effort.

Overreaching and having an ambitious goal is part of the process of reaching greatness. If I think back at how I've progressed both at my career as a journalist, manager and administrator, and how I made the strides as a runner, there were always moments of risks. When fear drove me more than I was prepared, something within took over -- innate skill, mental toughness or the true self.


Fear will keep me humble, put me on plan, and race with my head, then with my heart, and always fuelled by my soul and soles. I've gone through a whole lot of them in my life.

As I try to bring the calf back to health, I'm finally confronting that fear again. I fear the pace that I want to go out at to get that personal best. I fear that my calf won't hold, that my pace will flag, that the training just wasn't enough.

But with fear, comes the calm confidence that I know I should have. My coach tells me I'm fit. The runstreak that now measures 314 days has steeled something within. The miles don't lie, and I've put the work in.

This is truly a fantastic post Kenny! In so many ways! Thanks for writing it. Good luck next weekend!

I get the run fast, run long, and for a long time approach, so if you're injured, shouldn't you sit this one out? Coach might say you're fit, but you're the only one who can assess that! Success is when you do your best! You've done that in training and hats off to you, but could you do your best in this race if you're hurting beyond the usual exhaustion? Among the zillion races around, you could find another one in a few weeks and still be in top shape without the nagging calf! Either way, best of luck to you!

Thanks Robin and Patrick. Anna, absolutely, I know my body and that's the No. 1 determinant about my race readiness -- am I ready to "race" 42.2K. I am. The post is about once I figure my body is ready, is my mind ready to follow. Thanks!