I was dreading today, the last of the lactate threshold runs. The last one I did a few weeks ago during a race, 6 miles, was the best one I've done to date and the other ones (5 miles) were (4 miles) okay (4 miles), but not at the speed that I wanted them to be.

Today was a 12 miler with 7 at LT, so I mapped out an out-and-back route on paths that have only one or two traffic lights. The route has a lot of long exposed stretches. Plan was to warm up with 2 miles, then do the LT run.

Weather was partly sunny, and a temperature of about 19C. But it was the wind that was worrying me. It was gusting up to 30km/h by the waterfront. At the 1 mile mark, I decided to begin the LT run while I had the guts to do it. The first four and a half miles were done running right into the wind so I increased the effort accordingly so I didn't start the LT at slower than pace.

The wind had one bonus -- it was a cooling wind. I felt the effort was good, and I looked down at the Garmin from time to time to see if the km pace was showing faster than 4:30 (It was). My fuel belt functioned quite well, but kept on shifting to the right. I took about one bottle of Gatorade during the run, which was difficult but the fuel was much needed.

At the turnaround, I had about 3 miles to go, and I could suddenly feel the difference. When you run with the wind at your back, you don't actually notice the wind blowing, but you are being pushed. Now I was facing two challenges -- I was running into the sun without a cooling wind, and the rushing wind at the start of the run was replaced with quiet. It's safe to say that the last part of the run was aided by the wind, but I also dug deep to keep the pace up. As it turns out, I dug a little too deep and went faster than pace... I'll take that.

My heart rate maxed out at 183 in the last mile.

So what does this run tell me? I think the last few miles were run a bit faster than I should have, and they were wind aided, but I think the fact that I was speeding up shows I have a bit more in me than I think. I think one way to test this out is to attempt to run the half-marathon at the end of this month at a faster than usual pace. I usually target 4:30Ks/7:15 miles for about a 1:34/1:35 race, but I think it may be time to push the pace to 4:25Ks/7:05 miles or even a bit faster (4:20/7 miles). That'd be an interesting test. I've been dying to go sub 1:34 and it may be time to give it a go. 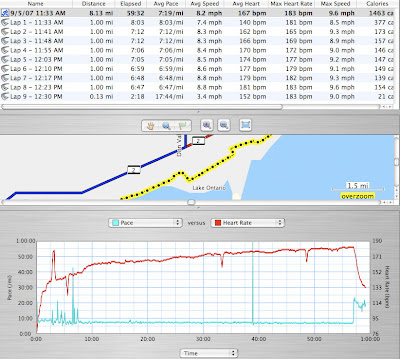 Email ThisBlogThis!Share to TwitterShare to FacebookShare to Pinterest
Labels: lt

Nice job. If I can put my two cents in. I really think you're underestimating your marathon potential. I know you suffered a bit last year at Chicago, but I think you were doing a very basic training plan. I really think that you could do 3:15, though you probably know what you're capable of more than anyone.