The day has arrived

As I type this, about 24 hours from now, I'll be in the latter stages (or end) of my fourth marathon. More than three hours ago, at 7:30 this morning, my alarm went off. The countdowns are no longer in months or weeks. Not even days. It's hours and minutes. A few things 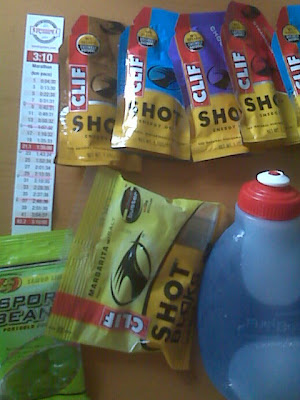 This is my fuel plan. I'm following the same plan I did in May for the Flying Pig. It worked out great and I always had something I could pop into my mouth every few miles. I think it's critical for me to mark on my pace band when to take the gels because in my first two marathons, in the excitement, I never took enough fuel.

Shot Blok: To prevent cramping as much as I can, I'm also taking Clif Shot Block with 'cramp buster' This has 210mg of sodium for every three cubes (plus 100 calories). I plan to pop one in my mouth in the kilometres between the gels. I hope to have one left for the final 5K. (Calories: 200)

Gatorade: Yes, I'm bringing a bottle with me to (sadly) toss away. There are water stations at 3K and 5K but I'm fully ready for them to be congested so my Gatorade will get me through the first one, maybe two, stations. I'll drink when I pass the stations so I'm following proper hydration.

Sportsbeans: I plan to eat them to calm my nerves before the race. I've done this before about 30 minutes before race. They're easy to digest and represent sugar intake. (Calories: 100)

So in terms of nutrition, I will get a 500 calorie breakfast, and 800 calories from gels, bloks and beans. I'll take water with gels and may take a few Gatorades a stations. It's tricky this business of fueling for the marathon. 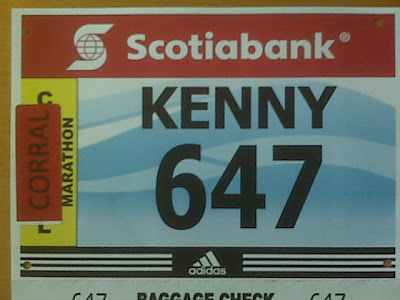 The course:
I have never run a marathon in my home city, but i've run thousands of miles in it. Not only that, I live at around the 19K mark of the marathon. This is my home course, no doubt about it. On the western part of Toronto, I run out there on average 3 time a week and have done quite a few races out there. Many people don't like the Leslie Spit and Commissioners Street part on the west, which is run in an industrial area, but I do many of my training runs on Commissioners and have been doing Leslie Spit quite often. The most eastern part of the course, the Beaches, is typically part of any long run I do of more than 14 miles. It's safe to say I know every rise, every bend, every pothole (luckily there are only a few) and even how it feels to run this course on windy, snowy, rainy and sun-filled days. One of my favourite sights when I do long runs is when I'm heading back to downtown, which would be around the 34K mark of the marathon. You can see the beautiful Toronto skyline with the CN Tower rising above it all. When I see that, I know I'm getting close to home.

Gear:
Still deciding on singlet, but I'm going to go with my new shoes. Fran suggested I replace the insoles of my new ones with the more worn out versions from the old one. I did so and it 'feels' much more comfortable. I also stuffed newspaper down the toebox to get a little bit on an expansion. I did about 2K this morning with no problems. I may another jog in the afternoon.

Final plans:
Watch TV, visualize the race, massage with The Stick and generally lay around. Oh yeah, and eating...

I've got all the same stuff but may use Gu for gels as for some reason I find the Cliff gels much harder to open, especially with sweaty hands.

Remember nice and slow at the start and when the pace bunny starts running at LT pace, don't keep up with him!

Hey Kenny, looks like you had a tough finish. Sorry to see that. Go get em at marine corp!

An awesome marathon time Kenny!! Not what you wished for but still a very good job!!! Can't wait to read all about it.