If Toronto had one marathon, what would it be like?

The news out of city hall that 2011 may see Toronto lose one of its fall marathons is sure to make some interesting debate in the running community. They are run three weeks apart and there seems to be no love lost between the two camps. Runners I believe are split -- build a bigger marathon or kill one major road race. 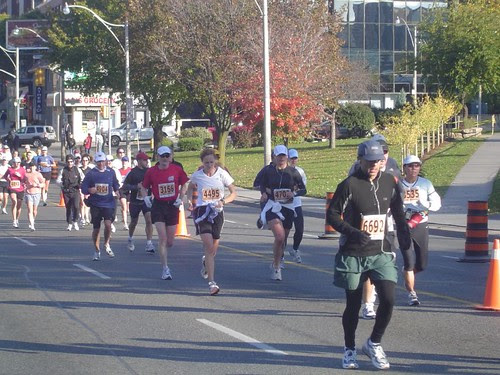 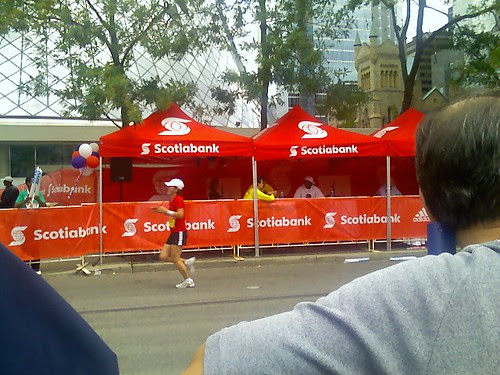 I don't think I need to rehash the old debate about which one is better. In the end, they are both 26.2 mile- or 13.1 mile-races run on city road. In fact, I'm totally happy to stay out of the debate: I know that a single marathon could result in building a megamarathon in this city and country, I also love the choice I get to do two major races in Toronto. On a side note, for all of us who complain about the state of our health and obesity rates, REALLY, you really have to go after the running community. What's next, ticketing jaywalkers after a bunch of pedestrian deaths?

I've done both marathons and can talk positively about both of them. One is on my home running course while the other delivered my Boston qualifier.

Why not for a moment forget about Toronto Goodlife vs. Toronto Scotia. Why not actually think about what kind of race we want to build. There are two major factors that you can't control through organization (the expo, water stops, entertainment, swag, pacers) of a larger marathon, but for a runner looking for the best experience (and time), I would propose we look at when in the fall it is held, and what is the route like?

Timing: I have run enough races in Toronto to know that late September often risks us having a freak humid day. I like to call the Scotiabank Marathon, often done in the last week of September, the Humid Marathon. I think mid October is a perfect date, it gives a better chance at a cooler day which equals faster times, and Toronto is known for those perfect crisp fall days. I'd do it the second Sunday in October. In terms of timing against other races, it puts it on some years on the same weekend as the Chicago Marathon, but who are we kidding, we're not competing for those numbers. Chicago fills up to the max anyways. Also note that Marine Corps Marathon, which has 25000 or more participants, will in 2011 be run in the same weekend as New York. Why not try to build a second North American mid-October marathon.

Routes: The waterfront marathon is misnamed by the fact that you don't actually see the water much or at least run alongside it. Toronto Goodlife has an awesome start until the half marathon mark (it is net downhill and runs through really nice and interesting neighbourhoods) while the Scotiabank has a kinda boring out-and-back course. If we had one marathon, maybe doing the first half of Goodlife, then run it up University, around Queen's Park, then veer into some of the more interesting Toronto neighbourhoods -- maybe across on Bloor (or College), then down High Parkish area (Ronces), ending at City Hall or some other landmark like the Princess Gates at the CNE. Toronto is known for its diverse neighbourhoods - and not known for the waterfront highway - and it would a shame not to rethink the route.

If Toronto wants to build a megamarathon, then just like the Marine Corps runs through the National Mall, or New York runs up Fifth Avenue, and how Chicago winds through Grant Park to Wrigley and Chinatown, then we should similarly show off the best of the city. And if we halt traffic for one day, and not two, then lets take it to the max. Block all em roads.

Just something to think about.

I hope the marathon will not be on the same weekend as the NY marathon. I guess many people would prefer NY over Toronto...

But how many people would even get to get into New York? I think there are so many runners now that we shouldn't have to worry about dates. Plus, for us long term runners, choice is awesome. Toronto this year, maybe New York next, Chicago the following...

We've got room to grow.

Again, I'm not advocating for a single marathon, just saying the date should be in October if we go with one only.

ive done Toronto half, but not scotia. This year i wanna do the Scotia half and the Toronto Full. And i know many ppl who use that formula. hmmmmm, if there is one....what would i do?? no idea. but u r right. better to stay out of it.

The idea of a race the second wkd in October is intriguing. That's Thanksgiving right? I suppose that could be a con (people out of town) or a pro (make it a festive long weekend event.)

Thoughtful post-I do agree, but worry that the same people who want to regulate there being two will never allor for the best possible route and complete road closures. One reason Scotia has the route it has is to minimize disruption. I just don't see the city closing Yonge and Bloor. But could argue that's better as they have subways and they can open early that day. (Who would pay the overtime?)

I also would be interested to know if anyone is looking at the number of ALL closures for all events and parades. Other events close the DVP and the Santa Claus parade closes a lot of downtown. You get the point...

I think I'd be pretty disappoined if we lose one of our races. I like the option of having both.

Like you said, STWM route is NOT a good representation of the city. Blah, blah, blah!

Maybe it's because I'm not a driver in T.O., but I don't really see what the big deal is with having road closures for a few hours on a couple of Sunday mornings.

If we end up with a mega-marathon (which would be cool!), Torontonians are just going toi complain because the closures will be much for significant... more roads closed for a longer period of time. They'll never be happy... it's really too bad out city doesn't embrace this sport.

All this being said, I'm not thinking I should run the Goodlife Toronto this year since I haven't yet. Unfortunately I have an all-day-on-my-feet-event the day before. Decisions, decisions.

Its funny because as someone NOT from Toronto (though I love the city...if I wasn't American I'd be very tempted move there ) I actually really enjoyed the STWM course, even if its out and back. It made it easy to predict the terrain. Hell, I even liked the spit. It may not have been the best representation of the city, but it was a very fun race and I liked the neighborhood cheering competitions. (The only other race I know that does that is the Utica Boilermaker, which would probably be worth traveling too at least once if you could stomach driving to fricking UTICA which looks like it was hit by a nuclear bomb.) I picked it over Goodlife because all the people I'd talked to around here preferred waterfront. Maybe because it has an "international" feel to it?

However, I can see why the city hates having two races. Traffic closures for marathons are beyond expensive. Hell, here in Rochester people complain about the closures for our local marathon while nearly half of it is on a bike path...and obviously, its far less populated here. It would be nice if they could both exist in some form, but I guess with Missasauga and Hamilton you wouldn't want to move either one to the spring, right?

Love this:
"REALLY, you really have to go after the running community. What's next, ticketing jaywalkers after a bunch of pedestrian deaths?"

Good post - I think all of us have been waiting to see what would happen. Essentially the city gave them the opportunity to combine or move one to the spring and both said no. Now there is the potential that neither of them will even exist after 2010. I'm curious to see what happens and agree with a lot of your suggestions for the mega Toronto Marathon. (Interestingly, Jay Glassman - of GLTM- has said he won't release the trademark on "Toronto Marathon," so if he looses the RFP, maybe they'll have a naming competition.)