Up to last Sunday, I hadn't laced up for a race in 5 months, a very long time for me. For me, this 5K is the start of the race season and depending on my fitness and training, I'll race it or use it as a quality speed workout.

I arrived at the site with rain threatening and wind howling. Did a few striders and settled into the corrals. In retrospect, i kinda wish I had at least set some goals for my splits (4:10 kilometres for example) but i went out with feel.

First kilometre included a slight uphill with a plunge downhill. Did that in about 4:04. The next was fairly flat with a few turns but also faces into the wind. My watch has the second kilometre in 4:07, which tells me it wouldn't be a fast day.

I saw Lee blast by about a mile in (he finished more than a minute ahead) and could have given chase but I was content to be running along with my group. Not a good idea, because we were going at a not-too-fast pace. Kilometres three and four (which included bad GPS reception areas) in 4:18 and 4:15.

With about a mile to go, I decided to turn back into racing mode and started to pick off some runners. I used the last hill (I tend to race okay on inclines) to pick up five or 6 runners, and turned that into momentum. Ran the last kilometre in 4:04 with the last 200 metres in sub 4 minute kilometres. 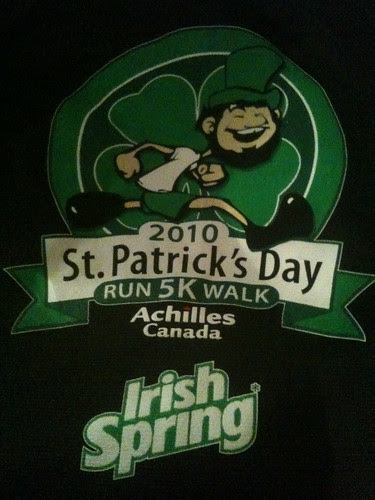 Really, not an all-out race but it would qualify as a decent tempo workout. In fact, the best part of the day was hanging out with some fellow runners in the beer distillery afterwards, sneaking in extra glasses of beer (we each sneaked in three extra after getting our one alloted beverage) followed by chili. Good company, beer before noon, not a bad way to spend a Sunday morning.
Posted by yumke at 8:47 AM

Way to kick off that spring season!

Good ork man, one heck of way to start the season.