No need for any sane human to comment on this, but I walked through a different downtown on Sunday morning, my seventh day at work, searching for an open coffee shop, surveying the damage. I shook my head and snapped a few pictures. 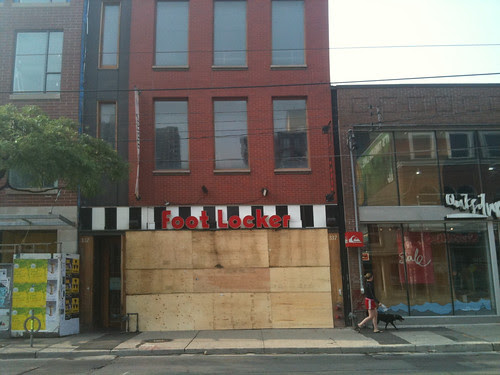 Everyone gets irritated once in a while. Maybe it's long hours, a brimming takeout container of work and, for me, too many hours in front of a computer for (what seems) like little payoff. I was hyper aware that I was in a foul mood. Others too in this city, it seems.

There were other factors that added up to my demeanor, but among them must have been that I missed my weekend runs. And I was too exhausted to get out on the streets yesterday.

Today, I sought to reclaim my own streets. I took my irritated self (and knee) and set out west. Into the angry wind. I fought my frustrations and took it out on the asphalt, the trails.

Then something happened. I felt it release. I looked up and saw other runners, also running with purpose. We started acknowledging each other. Smiling. Nodding. Even a raised hand. As I turned around 41 minutes and 4 miles later, and with the wind at my back, the pace increased, and I was in full flight. I felt strong. I had returned.

Back on Sunday on the streets, I was carrying my coffee, secured after visiting three shops that were closed as a precaution. A customer looked up from his Sunday paper and said "Hey, we made page eight of the New York Times." "Yeah, it's crazy," the employee said, drowning my espresso in hot water. I drank it and another two in the next two hours, adding to the irritability.

I walked on a deserted Queen Street in what was the calm before the second storm, and looked at the boarded-up businesses. I checked on a friend's store. Luckily, it and most others were untouched. Ahead, going toward me, was a runner, slowing to the jog, doing the same surveying. I wished I was in her shoes, running my city, making sure it was okay.

Tonight, I looked out into the harbour, and saw where just days ago, two police boats, a coast guard ship, and an RCMP cruiser were docked, was now replaced by a beautiful tall ship. And as the sun was setting, another one arrived, into the wind, gracefully docking beside my park. Irritation is gone. Serenity. And my 10 miler has put me in peace. 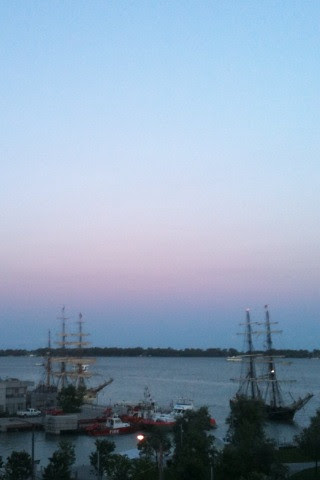 Must have been quite the weekend. I ran past the tall ships thing this past weekend and wish I had brought my camera. You're so lucky to be living down where the action is.