Training hasn't gotten off to the greatest start. In short, my right knee is bothering me a bit and I don't want to push it. It doesn't outright hurt, but some times I feel the onset of runner's knee. Funny, I have escaped knee injuries since 2006, when I had sore knee while ramping up the mileage for my first marathon.

I ran the 3.5K to the Night Crawler 5 miler start area. Yes, it's my fifth year in a row racing it and I love it. It's a great little race, and they serve hot dogs and Krispy Kremes at the end. And cool T-shirts. 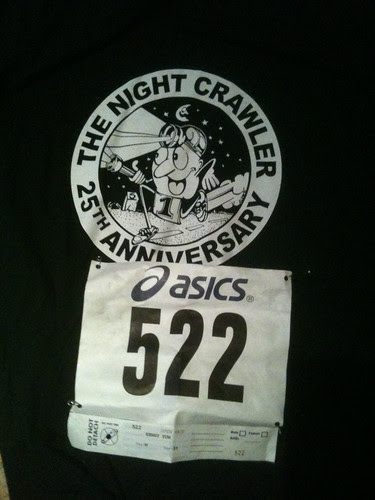 Lee was also running it and I met up with him and his wife. I told him I'd do today more as a marathon pace and take it easy on the knee. Besides, it was freaking hot out.

I seeded myself a little farther back than usual. Today was not pure 5 mile racing but a good pace run to test out the knee and my cardio in general. We went out and I had to do some weaving.

Hit the first in 4:33, then locked right into pace. I am constantly amazed that once I find my pace, I can just start banging out the kilometres. Problem early on was that everyone was going out too fast, and I was the only one going out at a constant pace. I passed runners for the last seven kilometres

We were running on the road and I was marvelling at the freshly paved asphalt. Made for smooth running. Also absorbed all the heat and put it back to me. I looked up at the setting sun (the race started at 7:25) and was grateful for that wisp of cloud that blocked the sun for a few minutes.

By the time we hit the half and the winding paths and slight inclines that led to the hill, I decided to just ramp it up a bit. There was a long line of runners ahead of me, and I knew that at my pace, if I was comfortable, I could start overtaking more runners. Again, I have done this race in the past running 4:05 to 4:20 kilometres. I was happy that at 4:30ish pace, I was not close to red lining. It was comfortably hard at the humid conditions, but no red line. Phew. I could hear runners I was passing labouring at their breathing more than I was. Great for me.

With about a mile to go, we had a straightaway followed by an uphill. I love that hill as I've written before. Run it all the time, know how to attack it. I passed at least six runners going up it, then another four in the flat after the hill. Approached the last bit and saw about five more runners. Finally upped the tempo to faster than race pace.

Last bit in 16 seconds and a blistering (for me) pace.

Here's Lee and I at the end. I'm way behind here, but congrats on your 5th Night Crawler! I hope that knee holds up.