Yesterday's 30K was a great long run, a confidence booster and told me I probably could have given more on the course.

It's the third time I've done this 30K. It was humid, threatening rain, but all in all, pretty good conditions to run in. I got to the race site with plenty of time to spare, (jogged over there) and bumped into a few other bloggers. My goal was to go for a decent pace, whatever felt strong but not quite racing. At first I thought it'd be 5 minute kilometres, but from the start, I really felt like going a bit stronger.

Out of the gates, I was pulling 4:50s, so decided to stick with that. It felt like the right pace -- really easy even -- but I thought I didn't want to risk going out if my body wasn't used to it. I have missed quite a few runs in the past two weeks, my long run last Sunday was kinda blah and I didn't want to bonk.

6-10K
There was a group doing 10-1s that kept on passing us, then would stop for a walk break. I still can't get my head around that method. I totally understand it, getting your heart down and recovering, but it doesn't quite feel right for me. In any case, these guys were going a little fast cause at the fourth time they passed me, they said they were '2 minutes ahead'. Even they acknowledged that wasn't good. That's the problem I find with walking then going up to pace. You don't get a sense of pace, and that doesn't really teach you long distance pacing. Anyways, after the fourth time I saw them stop, it was the last time I saw them. I took my first of two gels at the 35 minute mark.
6 04:47
7 04:51
8 04:51
9 04:49
10 04:50

15K-20K
Decided at the half mark that I felt good, so felt comfortable enough to up the pace. There was no one to really pace off of, so I was just going for a stronger pace to test myself. It was only a few seconds faster but noticeable. I felt it was important to see if I could turn it up, even if it was just a little. It started raining, and I was really happy I put the bandaids over my nipples. Yes, it's a little embarrassing we have to, but I saw at least four other runners who haven't learned. They were bleeding. You really don't make that mistake twice. Took my second gel at 1:30 mark.

26K - 30K
My left calf was tweaking around this point, not a good feeling to be having. I made sure to hydrate properly. I think it was more of a expression of not having really done pace work recently. We were winding our way through Ashbridges Bay and I was really happy by the almost two hour mark that my cardio was holding just fine. On our way back to the last two miles, I told Mark that I had a little left in my tank I wanted to use up, so we said good bye and I ramped it up for the last bit. Was good to run it stronger to the end, trying to run 'on the edge' so I wouldn't cramp but still go out strong.

I was really pleased with this run. It's quite a bit slower than my race times for other 30Ks but I didn't really consider this a race-shape run. It was an awesome long run and a great confidence booster -- didn't lose that much fitness in the last few weeks. Marathon day is in eight weeks and I still have more than a month to build up to it.

Best part of this race -- beer with friends after, and a new use for a big sized medal. Beer coasters! 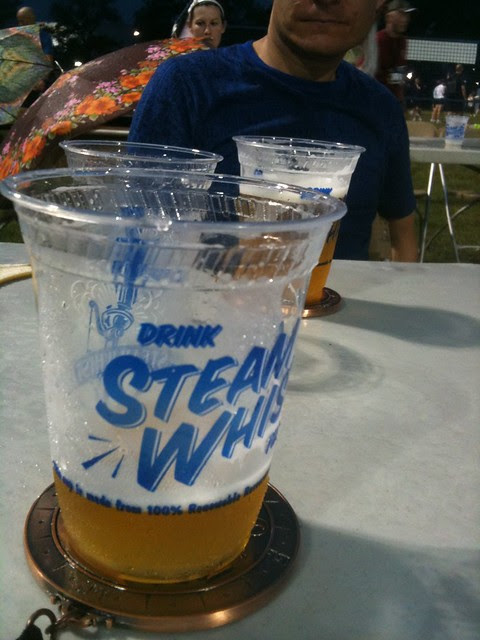 Sounds like a fun run. Good work out there to keep this pretty good pace.

Great job! The heavens opened up at around 9 and I wondered how people would make out. Your previous post made it sounds like you hadn't actually entered the race but I thought that was just a typo.

Congratulations Kenny! What a strong run given that you weren't sure what to expect and weren't "racing" by any means. You are such a consistent pacer! Too bad you weren't running MY pace or I would latch on. ;)

Mark really enjoyed running with you and having some company for a while. He struggled through the last 5K and slowed down a bit, but was still pleased with 2:26 (although of course he wishes he could have finished under 2:25! next time...)

Great use of the medal! Very nice swag this year.