How to set your marathon time goal: "Go for it"

I've been reading some posts and tweets about marathon goal setting. I see people who I think underestimate their potential. I see others who set the bar for themselves. In the end, everyone has to race their own race, and measure themselves against their own goals. That's the great thing about this sport for the 99.9% of us who don't compete for ranking. It really is our own race.

But running goals are difficult to set. Almost two months ago, Marie and Sam very graciously (thanks!) invited me to speak at a Running Room pre-run seminar to talk about goal setting. And if I was giving that talk a few years ago, I think there would be a different tone.

I think that every runner needs short, medium and long-term goals. The short and medium ones are the ones that get you out the door every day or signing up for your next big race. The long ones, they can be as concrete as a time goal ("I want a 3:30 marathon") or an achievement ("I want to BQ"). As I enter a more 'mature' part of my running life, I'm thinking long term also equals longevity ("I want to run into my 60s and beyond") and experience ("I want to run the London Marathon").

But the time goal, it's oh so tangible. Without setting the bar in hours, minutes and seconds, we have a little harder of a go at structuring the rest of our running life.

When it comes to the marathon, I am a dreamer. That dream, that belief in what you can achieve, is what took me from my very first half marathon to aim at one day qualifying for Boston. Just think about it -- before I had even crossed the finish line of a marathon, I believed and had set my time goal.

Belief has a big part in goal setting, I've come to learn. Belief had me setting my very first time goal for my first marathon. What was it? A 3:20. Looking back, it made for a memorable debut. A nice little "lets find out what the Wall feels like" back on a cold day in Chicago in 2006 (and I even wrote a post about it). So belief gives you that fat target. I didn't hit the 3:20 but I'm still shocked by my debut in the distance with a 3:35, even if I walked a lot in the last three miles. 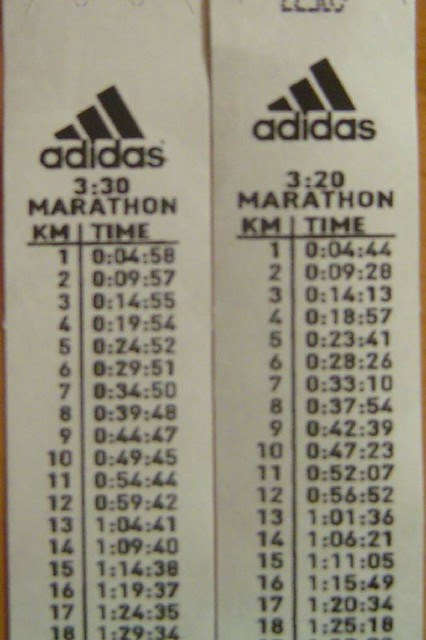 Goal setting is based on reality with a slight leap of faith in physiological science. I picked that first target time based on my best times in other distances. Right away, it made me train at more intense paces. While I was forced to lock down the 3:20 pace (4:45 kilometres, I still remember it to this day), all my other running improved. My 5K times, 10K and half marathon got faster. I was getting fitter with the 4:25 kilometer tempo runs. 4:45 at some point felt easy, almost every day. 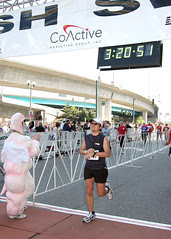 "Go for it" is my motto on race day, no matter what is thrown at you. Chicago was cold and my first marathon. "Go for it." My 2nd marathon saw me go out too fast and unprepared yet for the hills. "Go for it." My third marathon was perfect, except for the hills and the fact that we ran an extra 400 metres. I went for it, and I hit my 3:20 goal and set my sights for the next target: 3:10 and a BQ. I went for it time and time again. Sometimes "it" was fast, sometimes "it" was simply a well paced run. It was good to go for it.

I still think that my epic training summer of 2008, when I was logging 70 mile weeks and did 300 miles in August, 2008, was a prelude for my botched attempt on a warm day in September and four weeks later when I tried and failed again. That year of training set me up last year to take it a little easier and run smarter. That got me to my marathon PB a year ago. 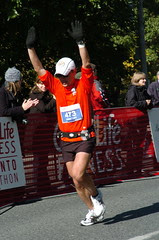 I'm now at a different space this year when it comes to marathon times in that I don't care much for it right this moment. I read a post I wrote last October that had me wanting to go 3:10 but I'm about to hit my marathon next week with no real expectation of anything faster than 3:30. I've thought about the 'hunger for speed' but I also have enough miles and marathons in me to know that I'm not in my top marathon time shape. I've got plenty of miles under me and the experience of 10 marathons. That will take me far this fall, just not at my fastest.

For those of you going for time, I wish you the best. There is no greater feeling than cashing in all the chips, laying it all on the line, going for broke, trusting in the training and running a smart and fast marathon based on the goal race and time of your dreams. You've done the work -- the MP runs, the track work, the striders. You've locked down your comfortably hard marathon pace, you've practiced fuelling on the run, and you've done plenty of 'warm-up' shorter races. Honestly, there's no other way to see what you're made of, to crash through that wall, to learn another lesson or maybe just get that goal time. Go for it, you won't regret it. 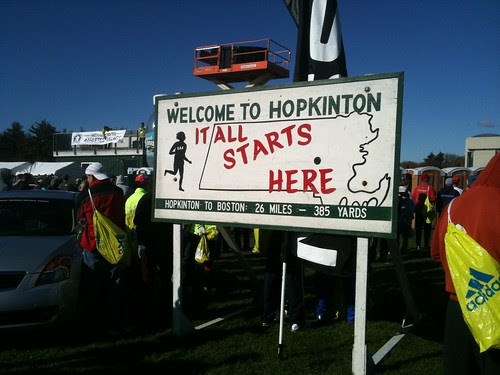 (And if you really have no idea what time to set, I love this McMillan race calculator. It is invaluable, just plug in your best time from a recent race -- the longer the better -- and it'll also give you your training paces. There are many others out there.)
Posted by yumke at 9:40 PM

I agree it's good to aim high. To be honestly, I have no idea how to set a specific time goal. I usually have a 5-10 minute leeway in my goals. I do have one though - BQ by the time I'm 35. So I've got some time.

Thanks for this - definitely something to remember.

I'm ready for Sunday. But is it wrong that I'm kind of wanting to be done with it so I can start thinking about next year? :)

This is why I thought you were the best person to talk to our clinic about goals!

Thanks again for the talk AND this post. I'm filing it away for when I tackle my first marathon in the spring :) Have a great race this weekend!

Setting goals is easy, but achieving it, is difficult. I agree with you, aim high, in every goal you have and do everything to attain it!
More power!