I am going to get sick of pasta

I don't know how many of you carbo load like I do before marathons. I usually start the Wednesday or Thursday before race day. More carbohydrates. Suddenly, I'm eating pasta more than one meal a day, I'm buying big batches of bananas and bagels, along with soup (salt) and pretzels (salt + carbs). It's a slow binge that releases itself on marathon day.

I have this nightmare of forcing down pasta by the time I'm running my third marathon in four weeks. I have to avoid this somehow. So along with my recovery plan between races the next month, which will consist of light runs and one pace effort mid week, I have to come up with a fuelling plan. 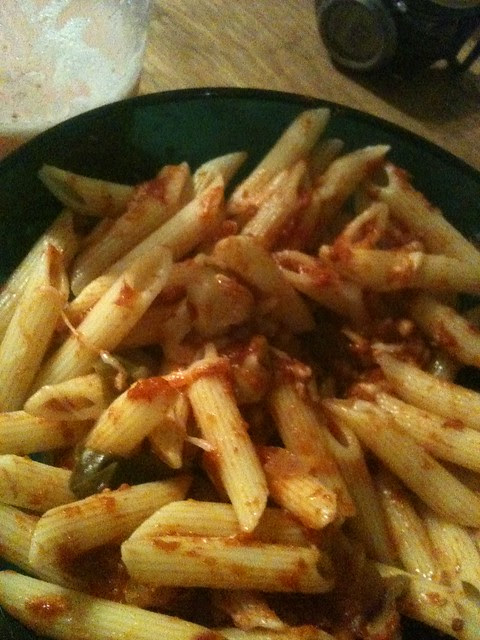 Pasta has been my go-to fuel for most of my races. Before Boston, R. and I hit Wagamama where I had ramen noodles (another form of carb) but not before I devoured a plate of linguine for lunch. Can't look at a box of pasta the few weeks after a marathon. I love the stuff, but too much!

A theme I'm trying to come up with over the next month.

Sunday: I gorge. I just ran a marathon (or paced a half). Plenty of carbs and protein and water to speed the recovery.
Monday: Proteins and veggies with enough carbs to get it into the system. Maybe Monday should be burger night..
Tuesday: Because I'll crave it, salads and protein.
Wednesday: Pizza Wednesday.
Thursday: Bring on the carbs in all of its glorious forms. Plenty of hydration.
Friday: Big pasta meal for dinner.
Saturday: Repeat Friday but do meals a little earlier with a late night carb topper.

Given that formula, I can avoid eating pasta between Sunday and Wednesday.

Or go with rice instead of pasta on one of those nights. Thoughts? How do you carbo load?
Posted by yumke at 8:17 AM

Pad Thai. I'd request it mild though if you're worried about spices, I know they sometimes set off my stomach.

I say Pizza! I can eat pizza all day.

I like to do chicken and rice with veggies in there too. I'll often lean towards that the night before only because its a bit easier to digest...at least for me!