A few days after the marathon, R and I took the obligatory tour up the Empire State Building and looked south. It's a breathtaking view no matter which way you looked. Peering towards downtown Manhattan, I saw the speck of a Statue of Liberty, and to its left, the Verrazano-Narrows Bridge that connects Staten Island to Brooklyn. What struck me was how far away that first two miles of the marathon seemed from midtown Manhattan, and how vast the New York City really is. I remember looking out on the other boroughs - Brooklyn and Queens especially - and thought fondly of the adventure I just had completed.

New York in marathon Friday was an interesting place to be. No matter where I was, I could spot the runners. On my flight, on the train ride in. There were quite a few international runners in town who pay a tour group in order to get a spot in the race, hotel and flight. My hotel was pretty hilarious, being the host hotel for the Italian delegation of marathoners.

It was exciting to be in the city for the weekend but we mainly kept to ourselves. The expo was massive but a little too packed. Bought some swag and made my way out of there. Rest of the pre-marathon time, we spent touring and hitting Italian restaurants. I was a little worried about the weather for marathon morning but settled on a long sleeve (The Shirt) with an option to wear a light singlet underneath, with shorts and gloves.

Marathon morning, I had no problem getting up and enough rest, I guess my body was expecting yet another race. Had an early breakfast given that the start was at 10:10 but as always, restroom breaks are among my biggest concerns for race day. I was out the door at 5:45 and headed down to the subway station that was only a few minute walk from my hotel. We waited, got on the wrong subway car only to catch the right one later to the ferry terminal. I had the chance to take an earlier ferry but I opted to stay warm a bit longer. Good idea. 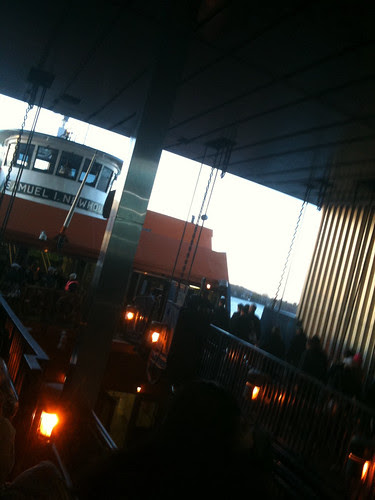 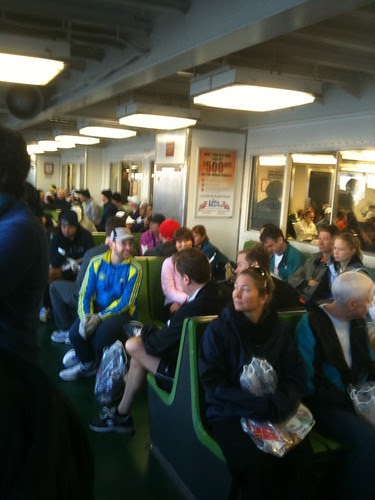 The ferry ride was cool. Caught quite a few nice shots of the Statue of Liberty and Staten Island. Quiet vibe on the ferry, and I ended up forgoing my seat so I could take pictures. I ate a banana on board, probably a good idea to save some carbs for what should have been my three-hour-before-the-race breakfast. 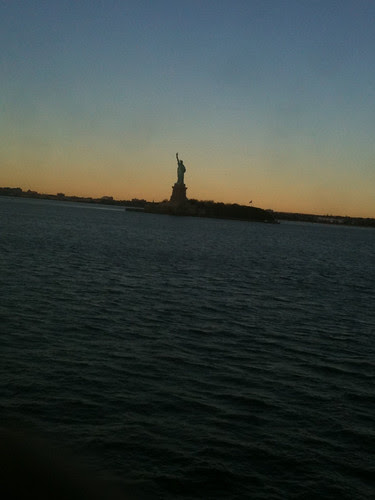 We arrived at the station and quickly boarded the bus. Scored a seat at the back of a bus and it was a quiet trip to the staging area. We exited and man, there were a lot of people. There were also rows of portapottys with only three people lining up for each, so I quickly went into one, and decided to put on my singlet below my long sleeve. A good move.

We entered the blue corral area with the UPS trucks and I found shelter so I killed 15 minutes sitting in the sun trying to stay warm. Before I put my bag in, I would have to pack my jacket and running fleece. I regretted not having an extra top layer other than my throwaway old sweater. Hit the portapottys again, you know, for insurance, and put in my bag. Instead of heading to the corral area, I had more time to kill before they opened up the wave 2 areas. So I found a parking lot drenched in sun, and proceeded to sit it out trying to warm myself. Other runners, mostly international, were doing the same around me. I slowly packed my gels, my hydration belt and my iPhone holder (yes, I was ready for sightseeing marathoning) and killed more time. 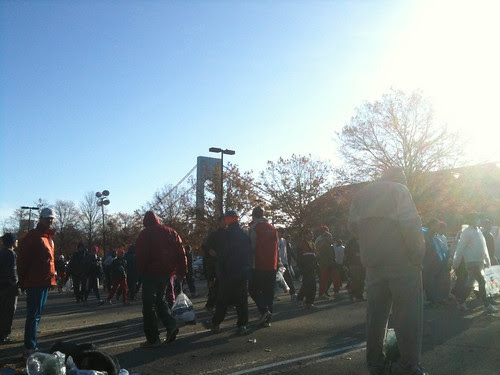 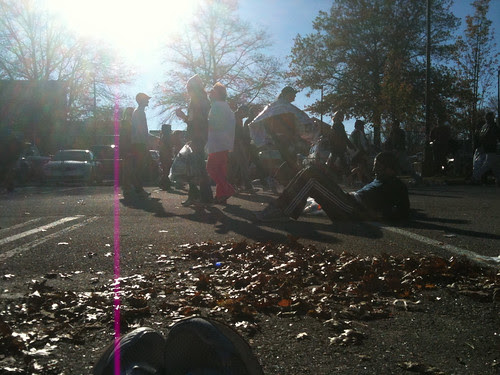 They opened the wave 2 corrals and I decided that in any race I’ve ever done, it was always smart to go early, so I made my way to my entry point, where they would fit all the 25000s runners. Good idea, as in minutes I had a big group of runners behind me. We got in and I lined up for the third time for the portajohns that were in the corral. Thank god for that. We stood as our fellow runners got ready. I chatted with a woman who also ran MCM a week ago (she spotted another one of us on the ferry) and saw quite a few interesting characters including a guy dressed as Waldo, South Africans carrying a Vuvuzela, other Canadians and other accents. Throughout the race, I saw a tonne of Italian and French runners and later learned they typically make up the biggest contingent of international runners.

Pictures from the corral. 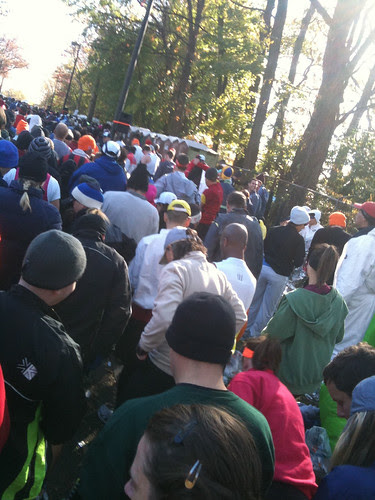 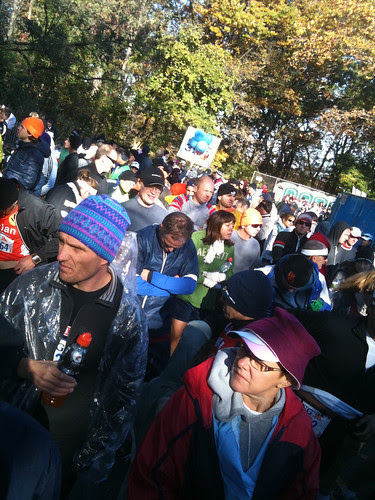 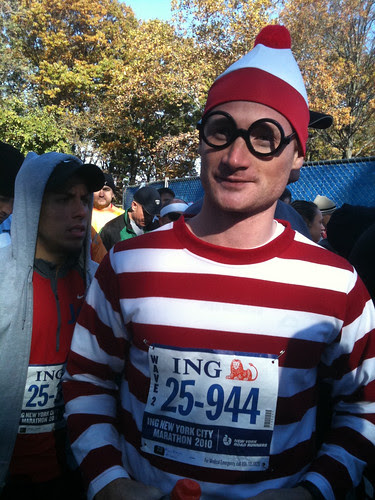 The 9:40 start went off and of course, we didn’t see a thing or even hear much, but there was plenty of conversation and anticipation. Pretty soon, we were on the move. I shedded my track pants before that, and had taken my sweater off but kept the arms on my to keep me warm. We had to throw that away pretty soon. I was excited, to say the least. I had no idea what the staging area looked like before we made our way to the front area, but we were quickly on the move by then. There was no jostling, just slowly moving, happy runners.

And before you knew it, we arrived at the famed start. I had watched this race on TV quite a few times, and it sent shivers up my spine to hear the “Runners, are you ready?” followed by a little Sinatra. I had to capture this.

Then took my own self portrait 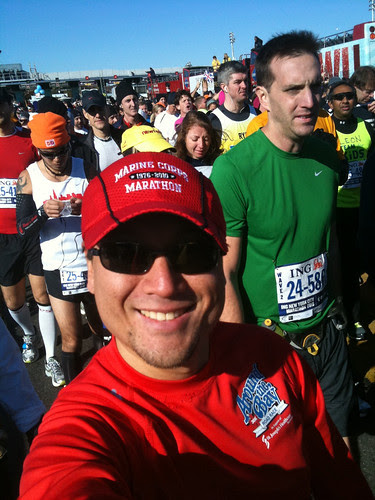 Before I began the epic journey. 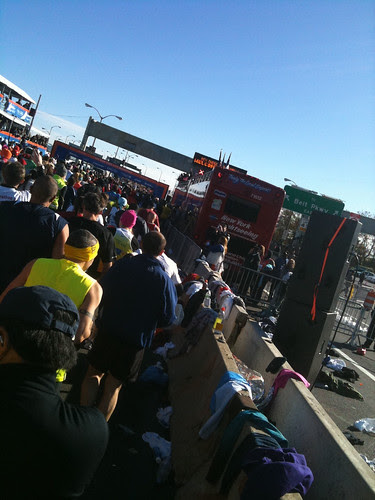 Next: Race report. (Sorry it’s taken forever, I’ve been off last week and now trying to recall the race).
Posted by yumke at 7:48 PM

Looking forward to the big recap! Sounds exciting so far.

some sweet pics! One day I hope I'll be running that race as well as Boston.

Great pics. I hope to do NYC some day.