And after that interlude

I can already feel the tan fading, and by the time I was working my way up the bridge into my first kilometre, in the snow, the reality of the training season has set in.

The reality: I've taken the mileage way down in the past month. Fine, I've extended the down period after the fall. Also, the past week of hanging out in the Dominican Republic taught me one thing. All inclusives and the appetite of a marathoner don't mix well. I'm now targetting my training efforts for the dinner table as well as the roads. So fitness and running won't be a problem, however daunting, to ramp back up to the 50 mile plus mark. My vow is to stock the fridge with tonnes of fruits and veggies and really eliminate all the junk out of my house. It works when I shop smart at the grocery store and avoid takeout for meals. It's doable.

The races are set. In exactly two months, I'll be the 1:45 pace bunny for the Chilly Half Marathon in Burlington, followed by the Around the Bay 30K in late month. Next, it'll be Boson, followed by a shorter (5K race) in April, then my 'goal' Toronto Marathon in May. With all that planned, I've got plenty of work to get to race shape by the time I put on those rabbit ears.

As I was finishing up my snowy six miler tonight, I looked across the street at one of those condo gyms, which usually have two or three people working out at the supper hour. Today, about a dozen packed the room. New Year's Resolution crowd is so predictable, and I've never trapped myself into that thinking. I did have to fight the urge to stay in rather than do my run, but I think I shook off that feeling. Running in the winter is not easy, treading on snow takes a little more effort and every stride is a bit harder. I always thought that extra work helps you get marathon fit for late March and April when the snow clears and you can really go all out on the roads.

The months ahead: Night time and early mornings will be on the schedule. I'll have to break out the thermal underwear, double up on the mitts, crack open those hand warmers and face those long runs with dread. Sure, they're great four miles in, but it'll still hurt at first. On some runs, like I did today, I'll try to picture what it was like to run in the warm sand, oceanside, my fare feet striking the salty tide. 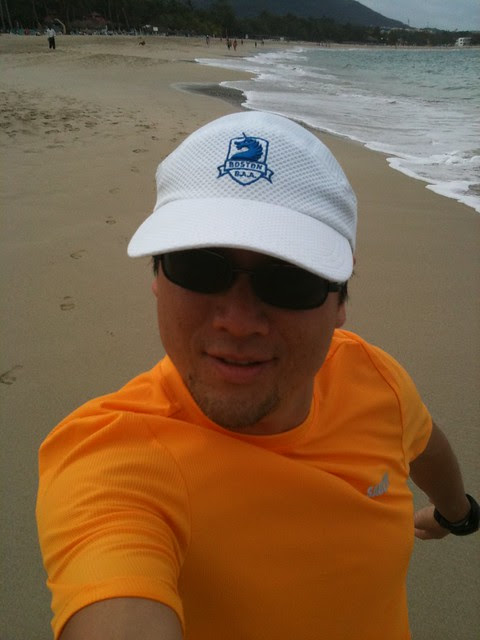 Woo hoo! All the best on the Chilly Half. I didnt' know about that race until it was full so I'm doing the Winterman half in Ottawa. Woot!

Oh, enjoy being a bunny again! I'm thinking of doing that 5k as well.

Nice picture. I am dreading the return to training as well after being off for over a month for medical reasons.