When they said 'don't try anything new before your race' they should have added 'or do something stupid.' Yes, I fully respect the distance, but for some reason, I had this absolutely silly idea that I would try on my Vibrams (after not wearing them since last October) and then go for a 4 mile run. Not on grass, mind you. Concrete and asphalt. Not slow, considering I haven't used them in awhile. 7:34 miles. Wow, that was dumb. Since Wednesday, I've noticed a massive tightening of my left calf AND my right heel felt tender.

I actually had not run since Wednesday -- I was in DC for Thursday to Saturday morning visiting R. Once in a while, I'd stretch my legs and try to work out the kinks in the calf.

Today's race forecast was a good/bad news story. Windy = bad. Windy that was a tailwind for the first half = great. Misty/rain = a great cooling source. Misty/rain + gusty winds = I can't feel my hands any more. True to my bad preparedness for this race, I had only brought one glove with me, so that was my one source of warmth.

My warmup before the race was about 50 metres of a run at pace. Uh oh. The calf did not feel right at all. It was tight as heck. Fine for short runs to loosen it up but I was absolutely worried about running a marathon -- I could picture my calf seizing up at the 20K mark or earlier.

I started the race catching up to the 3:30 group. I seeded myself behind them and it didn't take too much work to catch up to them. My leg was at the point where I felt I could push it to the 3:30 or a little faster pace, but not much more. Knife's edge. Yup.

By the 4K mark, I was ahead of the 3:30 and caught up to a friend. We chatted and I was soon on the way. I was feeling good cardio-wise. Wasn't pushing it. Enjoying the tailwind, taking it easy.

Hit the 10K mark pretty much on 3:30 pace. Decided in the next while to bump it up as my leg loosened somewhat. The 10K to 20K segment of the course is a great place to gain speed. It's flat or downhill. I took advantage of it, although there were a few kilometres where we got a taste of the wind we'd get at the end of the race.

Not bad splits. Again, was really testing out the legs. They were not feeling quite there. I had a thought that I would have to go out hard enough to give me a buffer in case I would have to start walking. Not a great feelng.

Out to the 30K was fine. I was enjoying running my 'home course' so I had the benefit of knowing every turn. Every turn, it seemed, had some sort of head or cross-wind. I got into a real good groove and took advantage of it. Another runner had turned it on as well (he had a friend with him and a bike) and we silently ran alongside or slightly behind each other. I later saw him at the finish and congratulated and he said I'd paced him as well.

My buddy Lee I saw on the way back. He rocked the course and I cheered him on. He came in 12th and booked a 2:54. Amazing.

The 30K mark to the end. Crazy. There was wind so and I had no group to run with. So I clicked the kilometres away. I took my last Gel at the 32K mark and water at every station. My hands were cold, perhaps a good thing that I took my mind off my calf.

I ran by my condo and laughed that it would be a great place to stop. I promised myself a strong run to the base of University and see how it'd go.

By the time I hit the 40K mark, I told myself I needed a break. Leg was okay but the cold got to me. All I really wanted was a sub 3:30, more so than a 'no break' marathon. So I took 15 second breaks once in a while, and kept on running. I didn't hit a wall, just the blah leg and my general exhaustion caught up to me. nothing wrong with that, really.

As I made the final 600 metres, I have it another go, and found my pace again. Enjoyed the final run down to the chute.

There you go. Marathon 15. I can't believe I just typed that. Fifteen marathons since I started running them in 2006. I learn a lot from every one, believe me. Even my 'veteran' attitude needs a shakeup. I was really touched when the volunteer who gave me the medal said 'I can't believe you guys do this, I really can't' with a big smile.

She's right. I can't either.

My hands were frozen. I ducked into a portapotty to change my shirt and put on my jacket. Then I just stood there for five minutes to warm up. Then I started walking hobbling. The left calf gave out. It didn't want to move. Thank you calf, I really hope I didn't tear you apart. I hobbled home, gave my legs an ice bath and am praying compression socks will do the trick.

A buddy of mine from work was at the race (he's running Ottawa in two weeks) and snapped up this picture of me. I'm smiling, but i'm freezing! 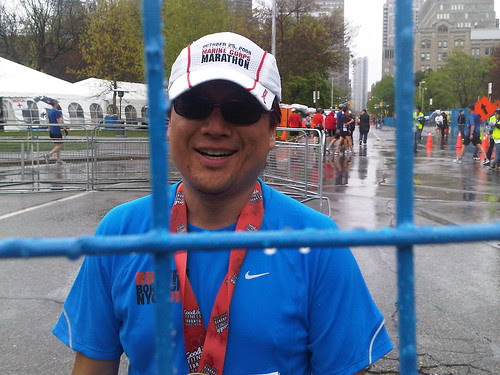 I saw so many runners out there supporting us. Chris, a fellow journalist, was camped out at 13.1. Marie and Sam (who also raced!) were out there in the final 400 metres along with James who I saw a few times. Jessica was on her bike cheering on. And I finally put a face to a name when Runshorts came up to me to introduce herself after the race. (Nice to chat!). She was there cheering on runners. So cool. Even though the drivers and the city in general are grumpy, it's awesome to have that community out there supporting us. Thanks 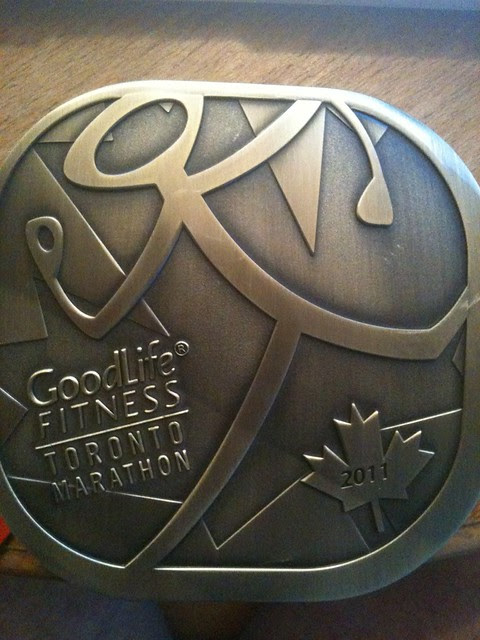 Is that another big honking medal like last year?

I can definitely commisserate with you on the wind. We hasd the same scenario and it was not fun. I actually loved the tempo/drizzle, but I run hot easily. I tossed the gloves early.

Congrats on #15 and hitting that sub-3:30 despite the major leg issues! I hope everything is okay.

Gutsy performance on a tough day. Bravo for making it through for #15.

A great job despite you leg and the weather. What an amazing feet (ha! pun) to have #15 under your belt!

You continue to inspire me, Kenny!
Great job and hope the legs feel better soon!

Hope the leg is okay, congrats on another marathon. I can't even get close to sub 3:30 on two good legs.

Congrats and you are such an inspiration.