Of the 70 or so road races I've signed up over the years, I've only did not start (DNS) one. The one time was for a smart reason -- my achilles tendon was really bothering me and I ducked out of a 10K.

10K races and me don't really go together well, by that I mean I don't really see them as goal races. Most of the time, they are plopped right before a marathon or right after one. In both cases, it's hard to go all out.

So when the alarm went off for an early breakfast. I stayed in bed. When it went out two hours before race time, I seriously did not want to get out of my comfy bed. Work has been busy, I've been run down generally and on the edge of sickness -- I've been taking anti-histamines every day for the last two weeks.

Funny, then, that a check of my Twitter feed had me seeing other people getting ready to race. They were running the Flying Pig (a race I did one year instead of doing Sporting Life), Big Sur and Sporting Life.

Needless to say, writing of this report means I dragged myself out of bed, ordered me up a cab and was at the start line.

SP10K is pretty simple. Two minor uphills (40ft), and lots of downhill (318ft). To run it well, you go out as fast as you can in the first 6K, then hold on for dear life (cause it flattens out at that point).

First half
I went out fast, but not at a speed I considered too painful, wasn't too sure what my tired little body would do. While others were around me were starting to huff and puff, I just kept it consistent and try not to panic too much. Took the downhills nice and speedy while catching my breath, and the uphills were pretty simple to power up. Passed people going up. Thanks Boston and Around the Bay!

So I managed not to get in a sub-4K in the first 5K. Yep, that's when I know I'm not really going all out. Fine. With the 5K mark done, I decided to think more about racing, about keeping up the pace and even going a little faster.

What the hell was with the spaced out water stops. Maybe I'm now just used to a water stop every mile with those big races I've been doing.

The second half features a lot of flats, I just tried to play hunter. Stay behind someone for the wind shield and if they were going a little slower, then pass them. That pretty much was the strategy from 6K to 10K. Worked quite well for the most part.

The long last bit was probably a few hundred metres that my Garmin went wonky.

Final time was 41:08, my second fastest 10K time on this course but more than a minute off. Super happy with that. Kind of wish I ran just a tad faster at the beginning because looking back, I could have had a good day. But i'll take it. I still feel blah but it's a wonder what a runner's body can do if asked nicely (tough love, I call it). 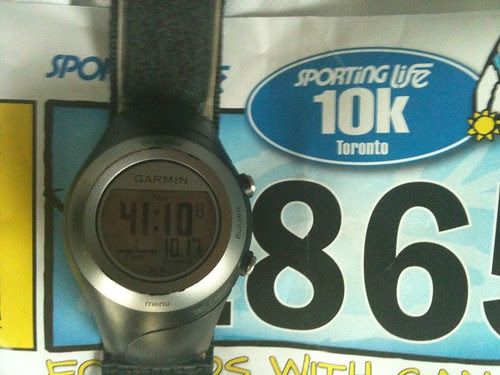 By the way, want to see how world class runners (future Olympian) finish a 10K? Look a this awesome win by Reid Coolsaet.

Congrats Kenny! Great performance on a day that you didn't really feel up to racing.

Mark told me that he saw you. He is very pleased with his race!

Congrats on a great result!

Hi! Good job on the race. I'm writing an article for Canadian Running magazine about runners and blogs and I'd like to get your feedback. Can you send me an email: john.lofranco@gmail.com? Thanks!