The road rules of tweeting

Anthony Weiner can tell you there are quite a few things you shouldn't do with your mobile phone.

Running and tweeting is not nearly as scandalous, but it can be a little dangerous. You think walking and texting is a challenge. Yes, I've almost run into many a pedestrian who was texting while I was running on the sidewalk.

Texting/tweeting while running is not for everyone. For example:

2009: Back in the day, when Twitter was in a newish stage, we read about that now-famous 'jogger' (what's that) who was tweeting while running, and hit a tree.

2010: Of course, run tweeting has really advanced (er... I guess), like when I decided to send updates while running Boston in 2010. Which leads to one of my favourite tweets ever.


Love Boston. http://twitpic.com/1gu2gtless than a minute ago via Twitpic

2011: Not to be outdone, a man named Joseph Tame decides to deck himself out in mobile gear to 'run' the Tokyo Marathon. Running is charitable, but you get the point:

A few tips about tweeting while running: 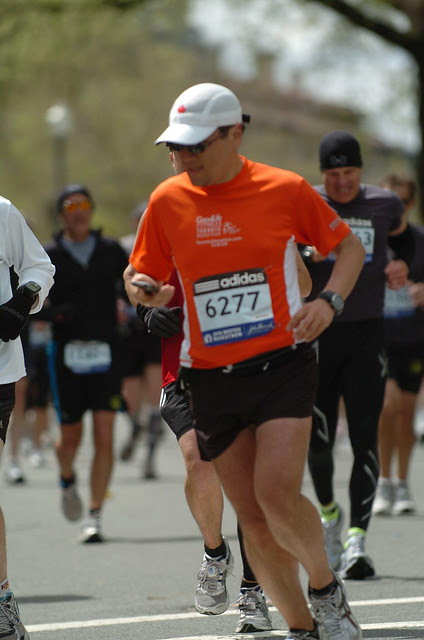 That last photo is classic!!!

I still don't have a smart phone, so you won't catch me doing this any time soon.

But don't do it in the rain unless your phone is protected!

Not that I would know from experience or anything :)

Tweeting back and forth with running buddies got me through my longest run in the last training cycle. It slowed me down a bit, but was like I had my own personal cheering section/pace group that day.

Also, your out-of-town marathon tweet posts are definitely some of your best ever.

I've tweeted while for a run a couple of times but I had to stop and move over to the side while I typed. It's impressive you were able to tweet while racing!