There are certain runners, and I don't know many, who love do to short races. By short, I'm thinking 5K and 8K. Me, a long distance runner, I can deal with three plus hours running hard. I can deal with the wall (most times) or mile 22 to 26. And in the end of the day, I know the mental toughness gathered during marathon training (and racing them) makes you well suited for other distances.

Pain, though, even if temporary, is what I associate with the distance. I never really train for 8Ks, but rather let them express my fitness level.

Funny then, that I signed up for the inaugural Dawn at the Don 8K today. Other than the fact that it replaced one of my favourite races (Night Crawler 5 miler), a few buddies were doing it, it was in the park, it was a good chance to get some quality running in.

Especially when I walked out of my condo at 7 a.m. and realized how warm it was already.

The race was run through Sunnybrook Park and in my 300 metre warmup, I knew it'd hurt. Hurt so much that by the time I hit the 1K mark, I was trying to do some mental math of how much of the race I had left (87% by the way).

I wasn't going to aim at any 8K PB but wanted to get in a decent run in. So I sorta aimed at sub 36. Fast enough, given the weather.

The field was pretty small -- about 180 runners. And when we took off, I was already in the front and not many ahead. So I just went out with a good pace, looking for comfort, not any running that would be taxing.

Ran a good first kilometre, reined it in a little at the 2nd, and decided to just run strong, not to lose much ground to anyone who was ahead of me, and to not give chase to anyone who crept up behind me.

The course had its hills, and while it was a little 'cooler' when we walked through some parts of the park, it was hot. Uncomfortably so. The tactic? Run and race, but never to the point where my breathing would suffer. Tackled some good hills and slowly made up ground on some runners.

At the turnaround, I saw that my buddy Lee was within the top group -- I actually thought he was leading. And since I had hit half way, my only thought was about the percentages, the location of the next water stop, and to tell myself not to slow down. I caught up to a few runners who had clearly gone out too fast, and was able to ramp up the pace.

We caught up with 5K runners, who started after us, and that kinda helped us go a little faster. I was hot, the water I poured over my head was helping but I was ready for this pain to end. I kept thinking of marathoning and how 8K was really not much.

Which led to me running the last kilometre as my fastest split. Man, I was glad to finish, glad that I got a hard fought run on a hot day, and nice to hang out with a few friends early on a Sunday morning. 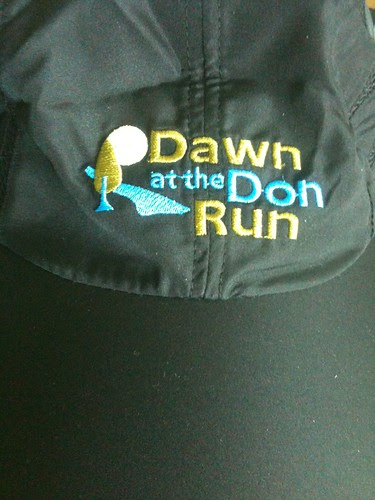 Hey, I also ran this morning! I believe I was 16th over all. Awesome route. Lots of fun. Especially for my first race. Ps. Ur writing is very good.

Congrats on a solid effort in conditions I find too hot to handle. 68 days until Autumn.

Congrats on a solid result. It was not easy to run in the heat yesterday.

Congrats great result especially in these temps. Love the hat!