"Take it easy," was the mantra I'd settled on, 2 kilometres into today's 10 miler. The weather was brilliant, I was hoping for more cloud than sun, and the crowd of runners seemed a little fast today. Maybe it was the 5K runners beside me, but I just knew to run this by feel, and the feeling was, don't blow up. The manta, as it turns out, didn't last the entire race, because the final two kilometres might as well have coined another one, more like "run like crazy."

I've never felt quite up to the challenge of the 10 mile distance. Maybe it's because it really should be much more painful than a half marathon, and I have been having little tolerance for pain. In any case, I was actually very interested to see what today would throw at me. I've been really finally ramping up the training and I think I've got a great base of fitness just by the miles, not the speed. In the last eight weeks, I've been in an average of 45 miles a week (I had two slowdown weeks where I did 30) and in the last four, it had gone up to an average of 50. The last two Sundays, I put in a 20 and 21 miler.

Today's race was a litmus test for what I would try at next week's 30K race. What do I choose for my pace run? Could I even do a 16.1K run at a reasonable effort?

Which is why I chose to feel out the course, and see how my body would react to the pace. The plan was to target somewhere around 4:35 to 4:40, and see how it went. In long-term theory/history, that's been my past marathon pace but this year, I've been doing just distance.

The first 3 kilometres, it was mainly running in packs, where I would just focus on turnover, breathing and looked a lot up at the sky. That way I wouldn't be tempted to race.


As we entered into the Leslie Spit, I shifted tactics just slightly, making sure I paid attention to who was in front of me. I knew that some runners would fade, so mini-racing effort would help pull me along. The mantra held, but I did feel the effort increase as the kilometres clicked by. The big packs of runners started to thin, so I had to be wary about actually trying not to be too content running behind/beside runners.


As we were nearing this point, I was feeling good. I took Friday off and did a slow 5 miles yesterday, so my legs, though tired from the training, was able to maintain the speed. I was really glad to have my fuel belt bottles, it's nice to be able to take a swig once in a while and use water at the stops to throw over my head.


When we got to the midpoint, I decided that there were too many runners ahead of me. Or something like that. I've used the second half or the last 4 miles of this race in the past as tempo miles, so I started to up the pace. A runner or two stayed on me, but my focus now turned from the sky to runners ahead of me. Racing time.


It's amazing how your body adapts when you just turn up the pace just a little. I actually think I run more fluid when I do so with pace. Was also feeling good to pass, to race. I was a little worried I'd upped the speed too fast, but those are just mind games. I just pictured that it was about 4 miles to go.


More of the same. I ran underneath this mister that the organizers set up. It gave me a little boost, along with the fact that I wouldn't really slow down at water stops. More runners that I started passing where in turn increasing their pace. This got me going a bit faster.


So we hit another water stop and I'm pouring water over my body and just picturing how little left we had to go. A guy who I'd been trailing off of earlier and who I had passed had come blazing by me. I started tailing him and together, we pounded out a nice final few.

This is exactly the race I needed. It was 20 seconds faster than last year, though off from the 1:09 I did back in 2008 (I just re-read that race report, wow, the splits I was doing that year)

Next week, I finally have the pace in mind for the 30K, nothing too ambitious, nothing faster than I've done before, but this race gives a nice little boost. Safe it to say that next week, I'll have to reuse that mantra.

Finished the day with 17 miles including my pre-post running.

(And notice the salt on arms.) 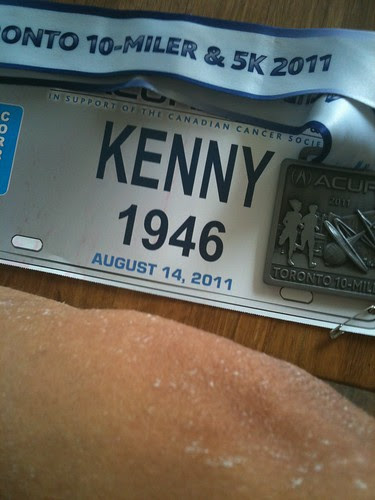 Congrats on the great result today. Good luck next week!

Run like crazy - you weren't kidding! I have yet to do this race... not sure why it has never been on my radar. Congrats on a great 10!

See you at Midsummer!!

Well done! (and thanks for your comment.) Was it just me who sweated buckets? I found it a touch too hot/muggy and at the end I actually had to wring our my socks as if I had been swimming. Somehow I missed the mister on the way back but enjoyed it on the way out. The on site massage was great too but I felt bad for the RMT having to deal with all of us sweaty runners.

It was pretty humid at the end yep. Could have been worse though :)

Congrats, you had a great race! Good luck this weekend.