I sat at my first baseball game in about a year a few weeks ago. I was watching the building of the wave as it made its way around the upper deck. It's not a big deal, seeing everyone raise their arms and go 'woaaahh!' Part of the way baseball has its charms. A group of 40,000 can feel a lot smaller when everyone shares a moment.

My Running Shorts wrote a nice little post recently about friendly (and insular) runners on the trail. In it, she makes a few great findings about the friendly (wave at you) runner and the non-friendly (so into myself) runner. She has a theory that in the summer, the ratio of non-wavers to wavers dramatically rise in favour of the non social.

With so much time on our hands, runners love to obsess over this interesting (to us) topic.

I would have to agree. Something about summer draws out the mass. Just an observation, but the trails become just a little less friendly.

I notice it enough that I've written about the runner's nod or wave. I notice I write about it on truly crappy weather days, when only the insane make it out.

Or this run I did on a rainy blah day in Montreal last year.

Running on mornings like the one I did today always is fun. In a new city, you wonder if you'll see other runners in bad weather. Undoubtedly, you do, and each one of them and I traded the runner's wave and a 'bonjour'. Funny no matter where you are, if the weather is crap, and you're running with gear, any other runner crazy enough to be out there acknowledges you. It's a nice thing about being part of that community. Call it the code.

Or when we think 1C is great weather, and those who are out, share the joy

The last two running days have been heaven in Toronto. Temperatures hovering above zero, a few moments of sunshine. I swear everyone was in a good mood on the waterfront trail -- dozens of runners I`ve passed over the last few days seemed to be smiling. I routinely do the runner`s head nod or wave but everyone was returning that today. Give us a respite from winter and runners will take full advantage.

A fresh carpet of snow, light winds and just -1C. My pair of YakTraks were giving me just enough traction that I could pull off a decent clip. On these days, when snow cover lightens up the trail, I`m loving running. I wave at the seven or eight other runners as we make tracks. Today, I only get in 5 miles, but I know longer mileage awaits. Marathon training is back.

Running for many is an individual pursuit, it can be something you to do unplug, 'get away from it'. Sure, you may do it and hate it and it hurts. Yep, that music track may be blaring, helping you pound out your next 400 metres, but there is something to be said about the open road that is very unlike that treadmill in that gym.

You are sharing the road with others. We are, in a lot of ways, following each other's footsteps. You think it hurts you? Sure, and it hurts the person who is running towards you. Maybe it takes a few years of feeling the burn, facing the crappiest weather, for you to realize that the other person heading toward you is feeling pretty much the same crap, joy, elation, muscle pain. On a winter's day, during a blizzard, that's worth acknowledging. This past Sunday, after I ran in pouring rain for 5 miles, the first thing I thought when I saw other runners was "wow, you guys are crazy", followed by, "and I am too." Give that wave or a nod. That's a runner's high five if I ever saw one.

I've never thought the nod or a wave was much effort. Really, just move your hand an extra foot or so. The nod is even easier. If you do it, you'll likely get a smile and a nod in return. 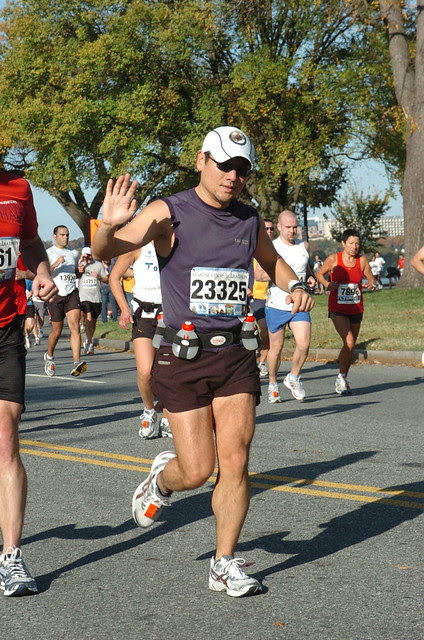 I always do the Runner's Wave.
When we are together, my run group can be irritatingly friendly - we say "Hi" or "Morning" to everyone.
How is that ever a bad thing?

I always wave and say hi when I see you :)

My reason I'm more social in the summer is purely practical:

In the winter, I'm more likely to have my eyes cast downward at the uneven ground in front of me, and also less likely to live my face up into the wind to make eye contact if it's cold and nippy out.

I always nod or wave.